"...the idea was that they could 'cleanse the sins from their souls' by washing dirty linen..."
-Julie Kline
Director
How did you become involved in directing the play Magdalen?

Through a connection thru both Daniel Talbott and Zack Calhoon, Erin contacted me looking for a director for her solo show.  She had been developing it for a year or so on her own and had just secured a workshop performance opportunity at Ryan Repertory in Brooklyn, and was looking for a partner to shepherd the show through the workshop.  From her very first email about the Magdalen Laundries, I was hooked.  I was shocked by their existence and more shocked still that I had never heard of them before.  My lack of knowledge about these institutions is sadly very common - this particular story of oppression is very little known here, and in Ireland is still one that hasn't gotten the recognition, nor prompted the deserved apologies that other Irish Catholic "scandals" have.

What is Magdalen about?

MAGDALEN follows the stories of four different women who find themselves at a Laundry through a variety of "offenses" - one had a child out of wedlock, one is developmentally disabled, one is a prostitute, one was sexually abused.  The Laundries were in one sense havens for girls who would have been completely ostracized from Irish society for these things - the idea was that they could "cleanse the sins from their souls" by washing dirty linen; in another sense, they were a place to hide away girls who were breaking Catholic norms and to punish them severely.  And of course, the Laundries were also commercial businesses for the convents who ran them and the girls never paid. 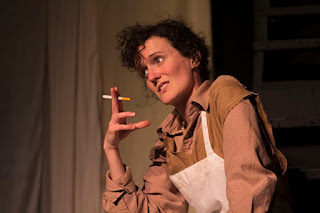 Besides the girls, the play also presents the nuns and a priest who ran the place, as well as a modern-day Irish man who now owns the property where a Laundry once stood.  We're attempting to show as many different viewpoints on these institutions as possible and reveal the reach of their effect, not only on the girls but on Irish society as a whole.  I think the solo show format is particular powerful for this story because it emphasizes the fact that despite the horrors of these places, all the players were of course human and doing the best they could in their own view - and in our play all of the characters come through one human body.  In under one hour, Erin represents all the different faces of the Laundries.

Do you approach directing a solo show differently than an ensemble piece?

It's been so fascinating to explore the solo show as its own theatrical animal.  I tried creating one for myself a few years back and found it to be an incredibly challenging art form, especially with regards to trusting your collaborators.  You're up there on stage - all by yourself - and so it's impossible to get your own outside viewpoint on the work.  That's where a director is so vital and I hope I have earned that trust from Erin to be the outside eyes she can't have.  Without other actors to play with on stage, I feel like I am both Erin's director and also in a way her scene partner - a mirror, a wall to bounce ideas upon, and hopefully a source of energy in the way a scene partner can be.  It's an intimate relationship and I think one that has been very fruitful in this case.

How do you collaborate with the playwright, Erin Layton?

Our process has been generally very intuitive with short bursts of intensely logical structural work.  We have definitely been learning as we go - for Erin, as this is her first full-length play, she's been exploring the craft of play-writing in this process, and I've never directed a solo show before so have been in a constant state of 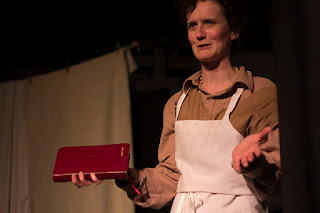 We created a ton of material at the beginning of the process and have since been finding the structure wherein the characters and moments we love can live.  This subject matter is vast and it's been easy for me to get stuck in the thing(s) I might "want to say" about the Laundries or an intellectual analysis of them or some such.  But it's when we root ourselves back into the lives of these girls - who just like any girls have hopes and dreams, and are continuing to actively hope and dream despite their surroundings - that the play truly comes to life.

How did you get involved in the theater?

I've been acting since I was 10 - first in the Bay Area where I grew up and then at acting school at DePaul University in Chicago before coming here to New York City.  I like to tell the story of my first acting experience at Alameda Children's Musical Theater as Becky Thatcher's under-study in "The Adventures of Tom Sawyer".  It's a quintessential example of what I love about the theatre - everybody hugged each other at the beginning and end of every rehearsal.  That's what hooked me.  So my obsession with the theatre really started as an obsession for that sense of ensemble that every play creates - that playroom you get to be a part of for the duration of making a show together.  I've tried to make that feeling extend by cultivating various theatre families - Rising Phoenix Rep, Rattlestick, Roots&Branches Theater.  With Erin in MAGDALEN rehearsals, I get to feel that same connection with our incredible team.

What's coming up next?

I'm very excited to be appearing in, associating directing, AND co-producing the fall run of Roots&Branches Theater company's new play, LET'S EAT! at the Baryshnikov Arts Center in November. R&B is a company very dear to my heart - we create intergenerational plays with our ensemble of actors ranging in age from 25 to 89.  This one is an intergenerational look at FOOD and features talking cookie dough, Yiddish-speaking ghosts, and a massive food fight at an old folk's home.  It's a great time, and I think we can boast one of the most unique ensembles in town!  Also, the Rattlestick season will be opening with Adam Rapp's new play in September and RPR has lots of adventures on its docket, including co-producing a new play by the incredible Marty Moran!

Performances are at The Gene Frankel Theatre (24 Bond Street between Lafayette & Bowery; Subway: 6 to Bleecker or N/R to 8th Street).
Posted by Unknown