WOF Writer Ruben Carbajal on the Real Sexiness of Playwriting 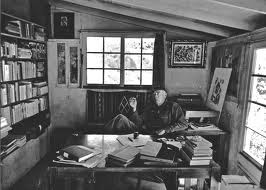 Why do I want to Write Out Front?

Because when I write, I am a sight to behold.

Blue curls of cigarette smoke encircle my intense, square-jawed face. A wide-brimmed hat rests slightly askew on my lovely skull. My loosely-knotted tie points arrow-like towards the keys of a trusty manual Smith-Corona. I'm pounding the hell out of those keys and that beautiful sound bounces off the walls of a smoky, dimly-lit garret. The room is mostly empty, save a few pieces of worn leather luggage, and some empty bottles of gin.

Um….after re-reading that and looking around my apartment-- I need to make some adjustments.

I'm half-dressed: the T-shirt I wore the night before and a pair of boxer briefs (sorry for that image). I'm sitting on the very edge of a large, ugly 'ergonomic' office chair my wife insisted would save our postures. Nice thought, but Indy, my yorkie, also insists on sitting behind me when I write, and he's not so good with sharing. Before long, I have about one ass-cheek on the chair.

Notes from my wife's make-up/beauty blog surround the desk I write on. We share a computer right now, because I keep putting off creating my own workspace. There's usually a cup of coffee nearby, and a bowl of my routine breakfast: oat bran, nuts and berries.  Not very punk rock, I’m afraid. I haven't smoked in so long, I don't even miss it anymore. If I have more than a beer, I suffer terrible hangovers.

I pretty much do write in a garret, but it's not smoky, dark or Parisian. It's in Jersey City. I'd say that obliterates any remaining romance, if there was any.

So why do I want to Write Out Front? Let me try again.

I used to act. It was my singular passion, but as I started to dabble in writing, I developed a debilitating case of stage fright. I would get on stage and just freeze up, full on deer-in-headlights.

That was it for acting.

Writing has become my thing, and I love it, but I still miss the incredible feeling of performing live. The experience is really like no other. Imagine the best drug you've ever had times ten*. But right now, even the thought of writing in public (no lines, no public speaking) is making me a little queasy.

It's good to do things that scare you.

I'm a freelance writer. Hey, I'm not a soldier or a policeman, but as far as jobs go, it's not a life for the faint of heart.

Truth is, it's been a while since I've done something that really knocks me off-balance. I hope this will shake things up and get me into the habit of applying that to other parts of my life. Maybe after this, I'll take that improv class I've been thinking about.

And maybe I'll have Super Sugar Crisp instead of oat bran. You never know what it'll lead to. 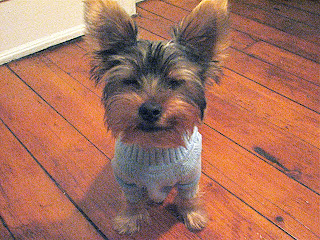 Now excuse me while I pull this yorkie out of my ass.

*In my case, it was the half of a xanax I had in 2004, which was far and away the most fit, relaxed and wonderful feeling I'd ever experienced in my entire life. This was so uncomfortable and unsettling to me, I was compelled to give the rest away.

Ruben Carbajal writes for fun and for profit. The fun is nearly constant. The profit, less so, but looking up. He will be writing in the window on September 1st from 3:00 - 5. He will also be at the Opening Party on August 13th at the Drama Book Shop from 7pm - 8pm. Come by and say hi!

Plays include THE GIFTED PROGRAM (Published by Dramatists Play Service), SUBDIVISION (Gorilla Tango Theatre), CAR & CARRIAGE COLLIDE (Pipeline Theatre) and THE LAST READER OF BOOKS (Hobo Junction). His one-acts PORTLAND and HOLD were consecutive winners of the Coastal Empire
One-Act Festival. His work can be found in The Best Men's Monologues of 2005, More Scenes and Monologues from the Best New Plays and in Outstanding Men's Monologues Volume 2.

As a freelancer, he's written commercial and live entertainment scripts for the NBA, several specials for Fuse TV, and a kids-centered comedy pilot for EA Sports.

He lives in the mouth of the Holland Tunnel with his wife and furry son, Indiana Bones.
Posted by Unknown