"This material ...was something I felt deep in my bones needed to be expressed and discussed."
-Emily Lerer
-Director﻿
What is R Culture about?
Most simply put: R Culture is about the intersection of ouR culture and Rape Culture.
How did you get involved with the project and Cecilia Copeland?
A little over a year ago I was looking for my next project. I really wanted to get involved from the ground up with something meaningful dealing with Rape Culture. I want to say that it was around the time of (insert blank messed up thing the political parties were saying about women and rape at the time), but there are too many. I felt an overwhelming need to do and say something about it on a large scale. I spoke with several friends in the theater community about the play I was hoping to direct. Several pointed me in the direction of Cecilia and the rest is history.

For a while at the beginning, Cecilia and I would email back and forth about scenes and ideas. She’d send me them in chunks and I would sit down to read them. Eventually full scripts were sent. We held readings of the material at ART NY and The Lark Play Development Center.
Every step along the way was very much a part of the journey to spark the discussion of this topic. I’ve heard so many personal stories. I’m so grateful to these women for sharing their hearts and histories with me along the way. At auditions we had one actress come in nearly in tears expressing how much of a lovely and sadly necessary environment we had created with this play.  Ladies in the hallway of auditions were sharing with each other their personal connection to the material. The readings and rehearsal process followed suit. I'm really lucky to have such a supportive team in my playwright, actors, design team and stage manager. Now that we’re up and running the play has done the same.
Why did you commission this play?
I needed to do something that both frightened me, excited me and was topical. This material I commissioned of a play dealing with Rape Culture was something I felt deep in my bones needed to be expressed and discussed. Its all around us and its something worth noting if we ever want it to change.
You have partnered with Safe Horizons, Crime Victims Treatment Center, Beth Israel Medical Center: Rape Crisis and Domestic Violence Intervention Center, and We End Violence for this production. How did this partnership come about and how have they helped or are helping the production?
I reached out to various advocacy organizations pretty early on. Some I found while looking to connect with the organizations specifically and others I found while doing research on the topic. We’ve also recently added Party With Consent to this list of advocacy groups. The reason for the partnership in the first place was to have the expertise and support with talkbacks. I really wanted to create a safe space for discussion and questions post show with this material.
How did you come to directing?
I have more of a formal acting background than a formal directing background. I spent 3 years in a BFA Acting program at the end of it decided I really didn’t want to be an actress. I’d spent more of my time in the acting program working on original work as an Assistant Director or Director. I’d have my classmates coming to me to look at their monologues even when their acting talent and instincts far surpassed my own. I’d see the picture at large fairly easily. I love telling stories and the point of view of the director more aligned with my view of the plays. I’m still very early on in my career but really feel like directing is my calling.﻿
Do you always commission the projects you want to work on?
This is the first play I’ve ever commissioned. I’ve self-produced and directed on a small scale but with established work. This is my first time working with a new play on what is a fairly large scale for me. We’re at an Off-Off Broadway theater doing a full length piece.
What's next?
I’m not sure. Is that fair to say?  I think that’s half the excitement of this whole crazy industry. I’m between 6 or 7 different ideas. I’d like to find a really badass female director who needs an AD on a project. I’d also love to continue working on very evocative theater as a director myself. I feel like I’m always drawn to works of a topical and political edgy nature but after this intensity I’d love to do something exploring friendship, or romance. 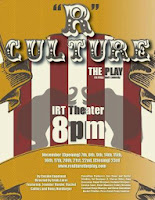 R Culture is in residence at IRT Theater, located at 154 Christopher Street, through November 24th 2014 at 8pm. Tickets can be purchased here.