Solo Performer Gardiner Comfort on the Elephant in Every Room...

"It's my story, but I also want to pay it forward for some young kid who is just starting his or her life with this confusing disorder."
- Gardiner Comfort
Writer / Actor

What is THE ELEPHANT IN EVERY ROOM I ENTER about?

The show is about a trip I took to Washington DC to attend the Tourette Syndrome Association National Conference, in April of 2014.  Being down there was completely mind blowing because I had never been around that many people with Tourette's, a disorder I was born with which has defined my entire life.  So we use the week down there as a literary anchor to tell the story, which includes all of these break out stories about my own life.  I tell stories about growing up feeling different, having a terribly hellish time, and also just random stuff that I remember.

How has it been developed?

Kel Haney and I developed the story in the Mabou Mines Residency this Spring by simply talking for hours and hours.  She recorded me as I just went on and on, both about the week in DC and also about all the random nonsense that goes through my mind on a daily basis.  Then Nora Ives, our assistant director, transcribed every goddamned word!  We went back and I read that, which was pretty meta!  Then we recorded my reading the transcriptions, and Kel made all these edits based on what seemed to work and what didn't.  It has continued to be very malleable.

How did you meet your director?

I met Kel through my wife, Colleen Werthmann, who happened to run into her.  They got to talking, and Colleen learned that Kel was directing solo artists and I happened to be looking for a director for my other solo show, YOU'RE NOT TOUGH, which Kel directed at Dixon Place last fall, and then again at HERE this summer.

How have you and Kel worked together to develop the piece? 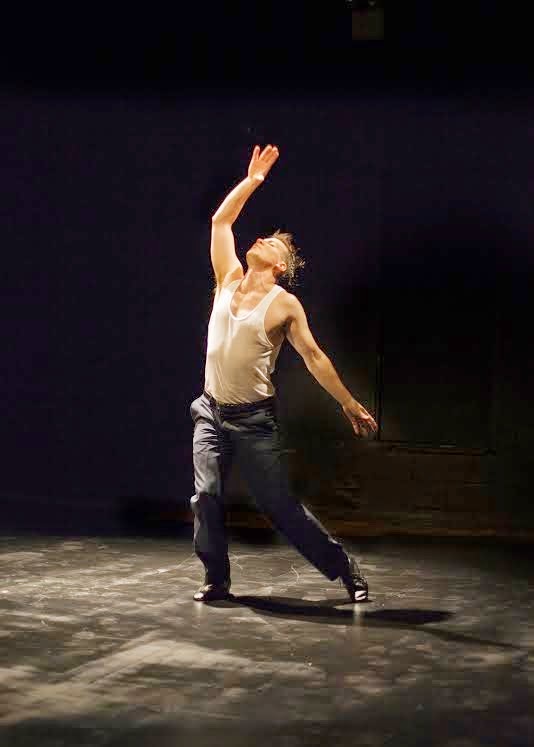 I kind of touched on this above but to add, we've mostly gotten to know each other really well.  Frankly, she's gotten to know the bizarre way my mind works and has learned how to harness all of the wild (some might say genius!!!) ways in which unfiltered, manic thoughts come to me and just need to be expressed.  She's been sort of the conduit for the electricity going through my brain.

What have been some of the challenges on developing this piece?

Challenges have been many.  It's pretty damn hard to produce your own work, even with so much help from a whole slew of people working hard.  Also, it's not a typical play or solo show, where, as an actor, I have a character to hide behind.  I'm just playing myself, standing there telling a story that's true.  I'm interacting with the audience a little and just baring all.  So it's pretty demanding emotionally.  Not to mention physically.  I do quite a lot of dancing and running around screaming and yelling.  It's very hard.

What have been some of the unexpected surprises and rewards?

The other night I found myself so connected and in the moment during a point in the story when I talk about a young boy with TS whom I met at the conference, that I really teared up when I told about not knowing what would happen to him.  It was beautiful and I don't usually have that experience, especially in something like this when it's my story.  It was a gift.  Also, I've been really blown away by how many people have come and liked it.  We've had all types of press and the Tourette Syndrome Association has come out in full force and spread the word, so that's awesome.  That's the whole point.  It's my story, but I also want to pay it forward for some young kid who is just starting his or her life with this confusing disorder.

How did you come to theater/performing and doing solo shows?

I started acting when I was in high school and got into it pretty quickly.  I studied Theater pretty aggressively in college and then in grad school and have a pretty eclectic resume.  Solo performing is something I've dabbled in since 10th grade, when I performed this monologue I wrote where I just listed things I hate.  From baby backpacks to Republicans.  It was a trip.  I was very influenced by solo artists I had the chance to see at places like PS 122:  Danny Hoch, Eric Bogosian, Sarah Jones, Nilaja Sun, and a lot of people in the Hip Hop Theater Festival.  It was a goal of mine to do my own.

Sweet.  Always.  What the hell does that mean?

The Elephant in Every Room I Enter is created by Gardiner Comfort and Kel Haney and is presented at The Club at La MaMa in NYC thru October 19th on Fri-Sat at 10pm, Sunday at 6pm. To purchase your tickets, go here.