Woffer Timothy Huang on Why Write Out Front 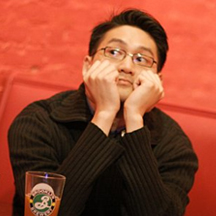 I write musicals.  I am a “team of one.”  Now, inherent to that moniker is the implication that I should be a team of two: a composer and a lyricist.  While this is definitely the more traditional route for musicals (see Rogers and Hammerstein, Kander and Ebb, Ahrens and Flaherty) it isn’t actually  that uncommon.  (see the Stephens Schwartz and Sondheim.)

What is less common though, and this pertains to why I’m excited about Write Out Front, is being a composer who doesn’t write at the piano.  That is me.  And even less common than that, being a playwright whose finished work just is always musical.  (Also me.)

Why is the latter uncommon?  For my money there’s two kinds of art in this world: the kind that is designed to help you forget (see The Producers) and the kind that is designed to ensure you NEVER forget.  (see Schindler’s List).  When the medium you prefer is primarily known for birthing that first bit, and you’re just better at the second, you tend to stand out. It makes for a steeper climb, but yields a proportional reward.  And honestly, if I had to surrender any one of the three disciplines involved, it would be exactly 33% less fun for me.  And who wants that?

Why is the former uncommon?  It’s as simple as understanding that muscle memory in ones fingers does not make for as effective a musical choice as say, knowing ones characters well and letting them sing inside your head unencumbered.  I mean, I loved Billy Joel growing up, but does every song in my musical have to sound like something from An Innocent Man?  No.  (Actually, that’s probably not the best example.  An Innocent Man is awesome.)  But you get what I’m saying. 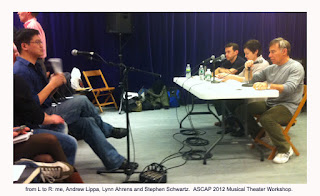 So, with as much objectivity as I can muster, and bearing in mind that I geek out at tech, I’d like to submit that watching someone toggle between Finale 2006, their custom script template (made with love from scratch) and Rhymezone.com is actually pretty fun to watch.   But more than even that, I think the spirit of Write Out Front is the biggest and best reason to do it.

Hardly anyone “on the outside” truly understands the nature of doing what I do, much less the mechanics of it.  They don’t have the ever-running thought process that flips on when you wake up to do any number of mundane tasks and doesn't flip off until you sleep, but immediately flips back on when you're dreaming... they don’t need two to three uninterrupted hours at a time to write, they don’t pdf sheets, upload them to the cloud, email the links to actors that are good and fast enough to learn and sing it the next day.  They don’t know that the answer to “what do you write first: the music or the words” should always be “the moment.”  They don’t know.  But they should.
Posted by Unknown