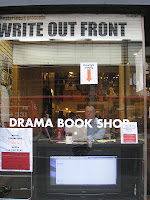 Wow. What an eye opening experience I had yesterday! When Micheline Auger approached me about sitting in a storefront window and playwriting for a few hours I must admit I didn’t really think it through before jumping on board. The audacity of the idea eclipsed any questions I might have had about how it would feel to share such a personal process in public. As the day drew closer I found myself worrying about it. Not quite regretting, but fretting over which play I would expose to the world. Should I revise an old gem that I adore? Or should I continue forward on my epic exploration of the rise of Ted Kennedy? In the end I arrived at what felt to me the perfect choice. I awoke Thursday morning inspired and convinced that I should use my 2 hours in the window of Drama Bookshop to create a performance art piece in which I would become the character whose words I was typing. 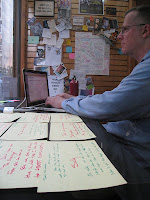 Let me digress a bit. I have for a very long time been a bit obsessed with the question of monologue writing in plays. It has been my observation that many a playwright confuses storytelling with monologue. A few of my favorite writers seem to appreciate the distinction. For me it boils down to one essential difference. In a monologue, a character is speaking to someone else with a specific intent. Even if that someone else is the audience, there still must be intention. If a student of mine responds to this challenge that “my character’s intent is to tell his story” I will usually call him lazy. (In a kind way, of course.) So that’s my bias. I’m upfront about it.

And so, I set about creating an extended and improvisatory monologue. In order to do this, I needed to know who my character was. I generally like to start with the specific details and expand out. So I took a mental look at the situation Micheline had put me in: A guy sitting in a storefront window. And he’s typing. And because of the glass, he can’t hear anybody outside but they can “hear” him in a sense by reading everything he types.

I forgot to mention. Part of the Write Out Front experiment includes a huge flat screen TV which is hooked up to my laptop so that everything I type can be read on the sidewalk. The most surprising thing to me was that the among the many passersby – some acquaintances, most strangers, some friends and colleagues—two of my closest friends turned out to be my worst audience. Why? They couldn’t go with the conceit that I was not Roland. As I said I had a whole character worked out with an extended backstory. My closest friends wouldn’t stop until they got me to acknowledge our relationship, either by eye contact, a smile or in one instance by actually typing his name on screen. 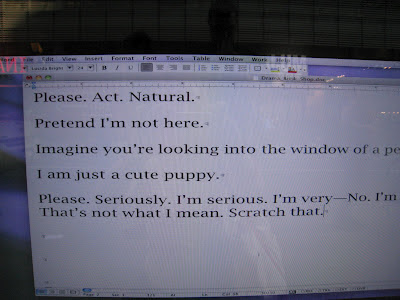 With people who had no idea who I was it was somewhat easier to rope them in to the journey of my character. I would toss them a provocative line like: “It’s funny that they call me ‘Yellowshirt’ since as you can see, my shirt is blue. Well almost, blue…” or: “They assure me I can leave whenever I like. And I believe them. Really. I do.” And then when one woman’s face clouded over after reading that last part, I spontaneously typed: “Why? Do you know something I don’t?” Some people gathered in clumps and enjoyed the fun of interacting with the guy behind the glass. We were actually in dialogue. And, see, that’s something that I believe fervently about monologue too. The best monologue is always really dialogue. In many instances they responded to me with facial expressions, gestures, laughter or in a few instances with something approaching tears. It was odd being in constant dialogue with a tiny audience like that for nearly two hours. One of my friends—himself, a playwright—kept scolding me as though I was breaking the rules. “Write a play,” he exclaimed a few times. To my mind, that’s exactly what I was doing.
Posted by Unknown