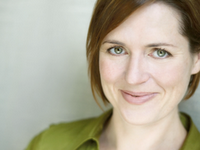 When I told my best-boyfriend-ever I was participating in Write Out Front, he said something like "that sounds like the most horrific thing ever".  He would hate for anyone to be witness to his creative process when he is composing.  He loves to perform, but to have someone watch while he's trying to create?  Pure torture. I get that -- as a singer, I used to detest for anyone to listen to me practice.  Perform, yes, but to hear me when I'm trying to work things out?  Horrifying.  Surely having people watch me write will be at least as nerve-wracking.

So why am I doing this? 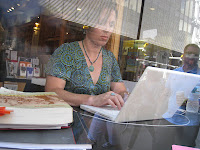 I could give a big-picture reason: I think the project is truly fantastic, creative, and worthwhile, as it  helps give exposure to playwrights and to give the wider world a window into our creative process*.

Or I could give a practical reason: I love writing under pressure and figure that there is no greater pressure than having people actually watch me write, so I'll be sure to get lots done.

Or a shallow reason: I'm acutely afflicted with "hey look at me" disease (as my boyfriend calls it), and there's nothing like sitting in a store front window on 40th and 7th as a way to get looked at. 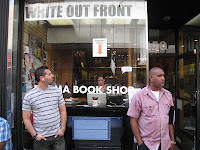 But I think the biggest reason is that I have this compulsion - and always have - to do things that scare me.  I'm a different kind of adrenaline junky -- not the bungie jumping/sky-diving/race car driving type, but the kind who constantly pushes myself where I am most vulnerable.  Even as a child and teenager, I competed in as many things as I could from spelling bees to student government to sports to speech and debate to music competitions. 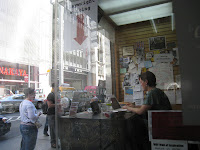 Many of those things I did not succeed at, but I kept doing them anyway.  And when it came time to choose what I was going to be when I grew up, I picked the most difficult thing I could possibly pick, the thing that would force me to constantly put myself out there in the face of rejection and the overwhelming likelihood of failure: becoming an opera singer.

And boy did I get regular adrenalin fixes with that one: every application, every audition, every performance was another chance to be judged and and to have someone else tell me whether or not I had worth.

Ah, we artists are such a contradiction that way, such a mix of ego and insecurity.

Age and experience have helped me gain a bit more control over my addiction, though.  Since giving up my opera career, I've come to recognize the value of contentment in life and now allow myself to devote time to things that don't require someone else's stamp of approval, like cycling, cooking, gardening, and even watching Breaking Bad with my sweetie. 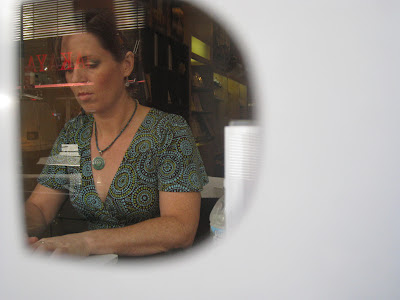 *if you think this project is as awesome as I do, or even just a little bit awesome, consider donating a few bucks to the organizers to help them cover their costs!
Posted by Unknown