The Power of Art and Starting a Conversation: Interview with Padraic Lillis 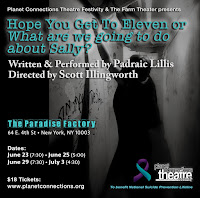 "105 people die from suicide each day in the United States and that rate is rising. One reason is because we don't talk about it. "
- Padraic Lillis
Playwright

What was the inspiration for Hope You Get To Eleven...?

I was a guest artist at a university last fall and directing The Christmas Carol and a student there, who was great, easy and seemingly comfortable with herself committed suicide over the Thanksgiving break. I also have a relationship to the issue, having battled with depression at various times in my life, like every ten years or so, and I don't talk about it, and I don't think people in my life knew I battle with that. I probably seemed like that kid, like things are going o.k., but if you look at the social media world you'd see I'm running a theater company, I have an award winning film, and especially at the time that it was happening, I had just gone to Milan and won the award, and I had spent spring break in New Orleans with a friend, and I just thought, we need to talk about it because no one talks about this. The inspiration was to just start a conversation and when you share these things and release them it has less power.

Where were you in the midst of the depression when you were writing this?

The worst of it had passed. But I wasn't far. I had struggled during the last year and a half and I was
taking care of myself and restarting with therapy and things were on the plus side, but things that were causing me stress and causing me to think that way hadn't fully changed, and so there were still challenges lingering. But one of the things that actually helped was starting to write something. Then wanting to make a piece of art about it has really helped lift me out of the thoughts and that period.

Did you know going in that this was going to be a solo show that you would be performing?

I sat down to write it thinking I need to say something; I need to do something, and then it took the form of a solo show and a monologue. It took the form of me talking about my experience and this incredible kid who died and some statistics that I knew. I wasn't sure what I was going to do with it. You know, I've only acted twice; this will be the second time in 25 years since I graduated college so I wasn't really thinking, 'I'm going to do this', but then I thought, 'I have to do something with this but I don't really want to perform this because it's about my releationship to suicide and I want to keep it private and protected and I don't think I want people to know all that about me,' and then I was on social media and I saw that a friend of mine's kid had committed suicide and I was inspired to write the play. 'Screw it, I'm gonna do this. Somebody has to talk about it.'

What was it like working with the director Scott Illingworth on this?

It's been great. I've known Scott for a while and he's smart and I trust him. What's been really good is just working on it and getting it closer and closer to me just telling a story. The more I work on it, it gets to be less sentimental and more about me just talking about it. The more confident I get about telling the story the more I'm able to make the points of why I'm telling the story: letting poeple understand how the mind works, letting people understand there are other possible causes, and it has become less heavy, mainly because I'm not sharing it for the first time. He teaches at NYU Grad and one of my favorite things that he said was when I was saying, "what I'd like to do with the section if I was a better actor..." and his response was, "Padraic there is no one better tahn you for this part." Its a good reminder.

What are your hopes for the play?

Hope You Get To Eleven or What Are We Going to Do About Sally? is part of the Planet Connections Theatre Festivity. All artists involved are donating their time and talents. All proceeds from the show will be donated to National Suicide Prevention Lifeline.

You can buy tickets here.

If you can't attend and would like to donate to the cause - we are having people donate tickets through The Farm Theater's website. Every $20 donated we will make a ticket available for 'pay what you can'.

If you are in need of 'Pay What You Can Ticket,' feel free to email Padraic at: padraic@thefarmtheater.org