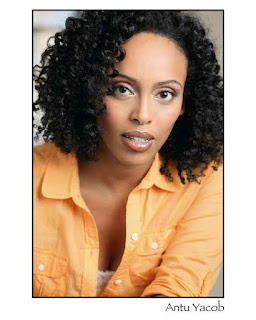 "I wanted to do something to educate those of us here about it so the conversation would begin."

How do you describe the Mourning Sun?

Mourning Sun is a love story that follows childhood sweethearts across two continents, navigating young love faced with an irreversible fistula. (An obstetric fistula occurs during an obstructed labour when emergency care is unavailable. See more below.)

What was its specific inspiration?

My sister who's currently a physician, volunteered at the Addis Ababa Fistula Hospital several years ago as a student. After she shared stories of the women she encountered at the hospital, I watched a documentary called A Walk to Beautiful. Having never heard of fistula before this, I was heartbroken and angry that 1) I didn't know about it and 2) it's a condition that doesn't need to exist. I wanted to do something to educate those of us here about it so the conversation would begin.

According to the Freedom From Fistula Foundation, "an estimated two million women in Africa are suffering from obstetric fistula caused by obstructed childbirth. Women suffering from obstructed labor often struggle until the baby dies.  During this agonizing process, loss of circulation causes tissue to die, leaving large gaps between the birth canal and bladder or rectum, causing incontinence.

Most women and girls suffering with obstetric fistula are ostracized by their families and communities as they smell and are constantly wet, leaving them to live as outcasts.  Fistula is all but eradicated in the developed world. In contrast, it occurs to thousands of women and girls in Africa every day and they have no-one to help.  "

What are your hopes with the play?

My hopes are that it continue to educate people who see it about this condition and move them to contribute however they can to organizations like Freedom From Fistula that work to heal and educate fistula survivors and their communities on a global scale.

I'd always written short stories as a child. When I was in high school and undergrad, I wrote a lot of poetry. As a grad student in an actors training program, I was immersed in plays. After my first touring gig as an understudy for Danai Gurira and Nikkole Salter, who were actors touring a show they'd written, In the Continuum, the playwriting seed was planted in me.

Being an actor, teacher and mother to a 7 year old, my writing schedule might seem unconventional. I just get it in when I can. I get the most writing done when I join a writers group of any kind and it's mandatory because the procrastinating gene is strong in me.

John Keller who plays the characters True and Dr. Wells in Mourning Sun, is Co-Producer of a community arts organization based in New Jersey called CoLab Arts. John had done a few readings of Mourning Sun and he was very committed to finding a way to get the story heard from the beginning.
Earlier this year, CoLab Arts was doing a 48 hour Musical Festival to raise funds for Elijah's Promise, a soup kitchen in New Brunswick. John and CoLab Arts Co-Founder and festival director Dan Swern, teamed Ari Laura Kreith, Theatre 167's Artistic Director and I up to create a piece about gentrification. I was the writer, Ari directed and we collaborated with a great band called Red Giant to present the piece in 48 hours. John had told Ari about Mourning Sun, and after our performance, Ari asked to read the play. The rest is history.

What was the process like working with director Ari Laura Kreith?

Every collaboration has its own vibe. No two artists work the same. Ari had a strong desire to tell this story and I love how brave she was in her pursuit to tell it.

There were many challenges that presented themselves throughout the rehearsal process, and she really was a maverick about things. Anytime a "no" or block popped up, she planted her feet in "yes" and "I don't know how, but we're going to get it done". I admire that type of faith, conviction and resolution in a director and a theater company. It's absolutely necessary when you're working as an indietheater company.


I'm filming a serio-comic web series I wrote and am acting in called Some Funk Actually Does Smell Good about an Ethiopian-born, American-raised woman balancing both cultures, attempting to take the "high road" of personal development throughout the chaos that is life. We'll be running an indiegogo campaign for that starting December 15th, so folks should look out for that! Also, I invite people to visit my website www.antuyacob.com for more and updated info.

We’ve explored different ways of partnering with charitable organizations, for example trying to find someone to match number of tickets sold. At our opening night, one patron agreed to give a dollar to the Freedom From Fistula Foundation for every seat we filled. At the box office, we thought she’d ask how many were in attendance. But instead she handed us a check made out to FFFF for $75, a dollar for every seat, filled or not. Then after watching the play she said, “I haven’t done enough. I want to pay for a whole surgery.” And at our opening night reception she pledged enough money to pay for a full operation. (An operation costs on average between $450 and $600 depending on which country it occurs in.)

The following week, Louisa Boyle, the development director from FFFF, came to speak after the play. It's a great organization because their overhead has already been subsidized so every dollar you give goes directly to medical support to solve the problem. One audience member was so moved by the play that night he wanted to finance an operation too, and agreed to send an amount to that group commensurate with ticket sales our final weekend. He returned to see the play a second time and asked us to announce his donation anonymously last night while he was in attendance, so audience members would know that just by going to the play they were helping the cause.

So far we have raised enough for over three operations.

Ways you can help:

1. Come see the play! If you buy tickets the final weekend, it will help the cause.

2. Seeing how well the play raises awareness and energizes people about the issue, Louisa Boyle, the development director of FFFF, wants to get Mourning Sun seen by United Nations groups. We are currently raising money to tape the final performance and make Mourning Sun have an international impact. To give a tax-deductible donation to help that project go forward, click here.

3. To give directly to FFFF, click here.  Just tell them Theatre 167 sent you!

4. Donate to Theatre 167 so we can continue to do plays that change lives.

Antu Yacob was born in Dire Dawa, Ethiopia and raised in California and Minnesota. Her plays include Mourning Sun, Love in Submission and The Firsts. Her work has been featured in Project Y Theatre’s New York New Playwrights Festival, Crossroads Theater Company, NowAfrica Playwrights Fest and Alchemy Theatre Lab. As an actor, her theater credits include Stepping Out of the River at Dawn, A Jew on Ethiopia Street and Pilgrims Musa and Sheri in the New World (Mixed Blood Theatre), In the Continuum (Primary Stages original national tour), Holiday Jubilee (Crossroads Theatre), The House That Crack Built (Pillsbury House Theatre). Film & television: Law & Order: SVU, Walking in Circles, Fine Art and Inspiration. MFA-Mason Gross School of the Arts at Rutgers University. www.antuyacob.com.