Woffer Nathan Yungerberg: Writing In and Out of the Comfort Zone 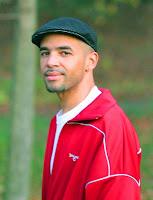 I am sitting here in a coffee shop in Bed Stuy, facing a huge picture window that overlooks the street.  I come here almost every day to write for three hours. By the time I am ready to leave, many of the other tables next to me are filled…but most people choose to sit with their backs to the windows. I guess I can see how it could be distracting, watching the morning life of Bed Stuy unfold along Lewis Ave, but I find it a welcoming reprieve when I come up for air after an intense deep sea dive in the made up world of my plays.

On occasion, I lock eyes with strangers walking by, as we humans often do when the mysterious force of another person’s gaze pulls us in. And sometimes they catch me staring straight ahead, lost in a daze, but  they can’t see me looking out over the saturated blue Atlantic Ocean from a veranda in Salvador Brazil, where my current play is set. 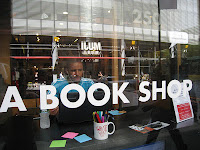 Do the passerbys wonder where I have disappeared to; can they hear the waves crashing and the lyrical sounds of Portuguese dancing in the air?  Then I think about writing in the window at the Drama Book Store and the reality that the people on the street will actually be able to follow my journey is scary and exhilarating at the same time!

What scares me is the most is that I will be sitting in a window revealing a very private act that I have only performed alone in bedrooms and coffee shops around the world. (I know that sounded kinda kinky but bear with me!)  Sharing my writing process in public this way seems somewhat…frightening! But maybe intimate is a better choice of words than frightening…or maybe a combination both: Intimately frightening! 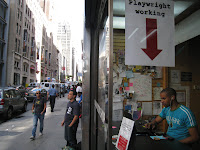 When I first read about Write Out Front, the thought of writing in a store front scared the crap out of me, so I immediately filled out the application to honor a decision I made to consciously put myself in situations that are out of my comfort zone.

I am finding that the theater world is full of situations that are way out of my comfort zone; from the razor sharp daggers that stab my heart every time an actor misinterprets a line, to talk-backs, to the inescapable stack of rejection letters, to painfully harsh criticism. 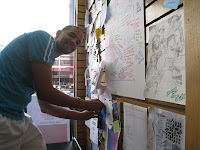 Don’t get me wrong, I really do love the entire process, even when it makes my heart sink into my big toe! It is the balance of fear and elation that propels me forward!  And there is plenty of elation, like when amazing actors bring your characters to life in an almost eerie way, or when someone approaches you brimming with emotion to tell you that your work moved them in!  But I think the fear stems from the reality of going public, as playwriting is a very private process that must become public if it is to be actualized. So what better way to face this fear and grow as a playwright than writing in the window of the Drama Book Store!!

Nathan Yungerberg is a Brooklyn based playwright. Nathan’s play, The Son of Dawn, had a members reading at the Playwrights’ Center in Minneapolis in June of 2012. He has also participated in the Classical Theater of Harlem’s Playwright’s Playground and his play Pousada Azul will have a staged reading for the Blackboard Reading Series at the Cell on September 10th and at the Playwrights’ Center on November 20th.  Nathan is also a season 4 playwright for The Fire This Time festival at the Horse Trade Theater.
Pousada Azul-Blackboard Reading Series-Monday September 10th 7:30PM at the Cell- 338 West 23rd Street, New York, NY (Between 8th and 9th)