This is the End of the World As We Know It (or is it?) John Clancy on The Apocalyptic Road Show coming to the Ice Factory 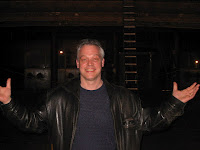 "...It’s like we’re quietly waiting for the end. No celebration from the evangelists. A ‘just you wait’ kind of dread..."

What was the inspiration for the Apocalyptic Road Show?

It came out of a desire to work with Pete Clerke and Catherine Gillard of The Occasional Cabaret. Nancy (Walsh) and I had been to Edinburgh several times and they had seen our shows and got to know us. We saw a couple of their shows and got to know them and their work. In 2010, they applied to Creative Scotland for a workshop for the four of us and the musician, Tim Brinkhurst, (co-creator) to sit down and work.

What kinds of things were you thinking about?

At that point, we were just thinking about end of the world stuff. Thirty-five minutes of songs, scenes and monologues, and that went well so we reapplied for a full ride, full production and were accepted. They gave us a month in a rehearsal room plus a tour of Scotland. When we showed up in September, we had dates booked without a single word written.

So what are some of the themes of the Road Show?

The whole point of the cabaret is the right now, the gestalt of the world in this moment. We were all fascinated by the confluence of apocalyptic visions, the Mayans, the televangelist guy in L.A. who was predicting the end of the world,  Fukuyama book – a sense in our country, and over there as well, that the time of Western dominance is over. The world is fading. That things are ending.

For me as a writer, I was thinking why are we almost comforted by this? It’s like we’re quietly waiting for the end. No celebration from the evangelists. A ‘just you wait’ kind of dread. It’s like a cultural cop-out. Nothing we can do, so just keep on keepin’ on, like it’s too late. Same thing from the left. Some scientists even say it’s too late. We should have stopped fifteen years ago. But, wait a minute. That’s not us. That’s not our species. It’s weird.

But saying all this, The Apocalyptic Road Show is a funny show. It’s comic. We share the same esthetic. Thought provoking but if it’s not fun then why do it?

How do you collaborate?

We were opening in Glasgow so we were like we better get a show going. I hate to be unprepared or be sloppy. What I insist on for myself, and try to insist on in my collaborators is let’s keep a long conversation going. Let’s keep talking. Just so we all know that we’re focusing on the same set of things, like in this case, we were focusing on apocalyptic visions, the Christian apocalypse, but then we let that go because we thought that was less interesting.

But if you get a bunch of artists in a room and you’re clear on the topic, that pressure eliminates a lot of waste of time and indulgence. Nobody ever said, ‘that doesn’t really work’. But if you’re always thinking people are spending money on this and people are coming to spend an hour or so to see it, it gives it a mode of practicality. We were actually living together and the rehearsal space was down the road. We’d work eight hours a day, come home and make dinner, Catherine and Nancy would run lines, Peter and I would talk in the next room about the show. It was all we did. It was gorgeous.

I always talk about the independent theater scene of the 90’s. We operated like a bunch of feral children. It’s always about necessity. You work all day at your day job, you book the theater five months in advance, and you know you have a show but you don’t have much resource-wise. In Scotland, we didn’t have much, but they paid well and we knew we’d be on the road so you put all your energy in the language and performances

What else you working on?

I’m putting out, with Martin Dentin a lab, or curriculum of new theater called Indie Theater 101. It’s a history of New York independent theater from 1997 to 2006 incomplete, ten plays, one from each year. I went back and read the intros to all the plays from back then (the 60’s) Maria Irene Fornes, Sam Shepard – they were writing for the space, audiences that were moving quickly, bored…and that hasn’t really changed. It makes a style of work that is fast. That doesn’t take itself that seriously but is able to make some strong points.

When is it coming out?

Sometime around the fall. The idea is that it would be online – a 12 week course and lab class - if it’s New York based, eight of the ten playwrights are in the New York area so the playwright can come by and you can directly talk to them. It’s an emmediate experience.

You can experience The Apocalyptic Road Show With Your Hosts Gdjet and Lulu, July 25th  through the 28th as part of the Obie Award-winning Ice Factory Festival at the New Ohio Theatre, 154 Christopher Street.
Posted by Unknown