Stephanie Bok Writes, Supports Writers and Does Other Cool Stuff. 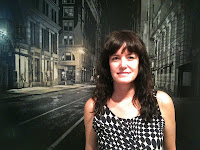 "I loved doing something in a bar where people didn’t think of theatre as ‘high art,’ aka inaccessible...."

How did you first get involved in theater?

I did a lot of performing as a kid, with community theatre, dance recitals, plays in high school back in my hometown of Dover, DE. I studied theatre at the University of Southern California (a pretty long time ago) and have been working in the industry ever since in some capacity (admin, stage management, acting, teaching, writing, producing) in Los Angeles, Atlanta and here in New York.

How did WRITE NIGHT come about?

Three years ago, Cindy Hanson and I wanted to produce a performance featuring our own writing and include some of our talented colleagues (including Janice Lowe who has been with us since the start).

I had just finished producing a month long play reading series at Freddy’s Bar and Backroom (it’s since been torn down and moved), and I loved doing something in a bar where people didn’t think of theatre as ‘high art,’ aka inaccessible. I had been a regular customer at Frank’s Cocktail Lounge for a number of years at that point and was excited about the idea of doing a performance there.

In 2009, we were in the middle of the Nets stadium controversy, Bernie Madoff had just been busted and the economy was all bad news. So Cindy came up with the theme “How You Doin’? You Okay?” We called it a theatrical ‘check in’ with words and music.

It was a great success and we knew we had a good thing going. Other themes have been “Free Money,” “Dealbreakers,” “Bad Habits,” My First…” Each theme is just a jumping off point, and I keep it intentionally vague so it doesn’t direct the writers what to write.

It is always amazing to see what everyone comes up with. The best thing about Write Night is that it brings together a nice cross section of the community and while the people onstage and in the audience may look very difference from one another, there is a connection and identification through the work that everyone shares.

How can writers get involved?

We are pretty selective about who writes and performs the shows.  If writers want to perform with us, I’d ask them to send me a writing sample or invite me to a show they are doing. Mostly we use people whose work we know well and trust. The success of the shows is due to the level of talent in our writers. It is definitely not an open mic.

There are about 16-20 people who have performed with us over the years and about 8 core writers (such as Paul Boocock who has done every performance since the 3rd show) who are with us regularly.

What's the dealio with the South Oxford Space?

South Oxford Space is an office building for 20 small to midsized theatre companies in Fort Greene. It is owned by the Alliance of Resident Theatres/New York (A.R.T./New York), the service and advocacy organization for non-profit theatre in New York City.

There are 3 rehearsal studios available for hourly rental and one of the rooms is suitable for recitals and other small scale performances. I have been with A.R.T./New York since September of 2000 and am the manager of South Oxford Space. It’s a beautiful building full of companies creating great theatre every day.

You're a staff writer for AMERICAN CANDY which has a show coming up in July. What sets you guys apart from other sketch comedy group?

If I had to pinpoint one thing that really sets American Candy apart from other companies it’s the diversity of the talent and the subject matter of the material performed. It is produced by two very accomplished women, Hollie Harper and Patranila Jefferson and their standards for writing, directing and performing are very high.

The cast is ethnically diverse and the sketches appeal to a wide demographic. It’s not dumbed down comedy for teenaged boys. It’s for people of all ages. Bottom line, it’s the funniest thing out there.


What is inspiring you right now in terms of other people's work, upcoming shows, art, politics, food...

It’s hard to be specific about this, but I get very excited about work that is brave and honest. When a writer gets to the heart of something and has to make her or himself vulnerable to get there. And when performers take risks, but keep true to the character, when they get rid of the ego, and can make themselves ugly to get to the beauty of the work.  It also goes for art. One of my favorite photographers is Nan Goldin because her work is brave and beautiful even when the subject matter can be ugly.

I am also inspired every day by people I encounter in my regular life. I eavesdrop everywhere, not for gossip, but for little snippets of language, real life drama and situations that can end up in a story or play.

I am terrible at motivating myself to sit down and write. I need deadlines. So you might say my “writing schedule” is late nights the frantic week before a sketch, play or essay is due. I am thinking of starting a writing group just to be able impose a false deadline on myself. And also for the camaraderie and support of other writers I like to work with. 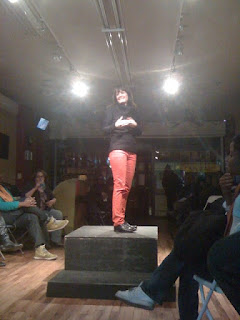 As far as of my work being produced, what’s next is an outdoor performance of my piece called “What Happened” being done by Modern-Day Griot Theatre Company.

It’s a monologue for 6-10 very diverse actors that explores the idea, “does the story change based on the appearance of who tells it?” It’ll be performed at Muss Walkway, near the Downtown Brooklyn Marriott on Friday at rush hour, 5:30pm as part of the Downtown Brooklyn Partnership’s “Performing the Streets” series.

I’m really excited to be associated with Modern-Day Griot, an up and coming new theater company who is doing great work in Brooklyn. Their Artistic Director, Pharah-Jean Phillipe is directing. And our next Write Night will be on September 27, with the theme “Going Places,” all about travel and transportation.
Posted by Unknown