"I think a misconception about abusing drugs and liquor is that the people doing it know why they’re doing it."
-Hollis James
Playwright

What made you write KYLE?

I think that KYLE was a story that I wanted to tell eventually, but I never thought I was ready to tell it until I sat down and the pages poured out of me. I think a misconception about abusing drugs and liquor is that the people doing it know why they’re doing it. I’m a bit vague in the show about why the lead character begins using, because to this day I can’t put my finger on exactly why I got hooked. It’s sort of the same with writing; I can’t really explain why I needed to tell this story or even why the story chose this time to get told. All I knew was I had to write it.

Did you experience fear or trepidation in any point of writing and developing something so personal, and if so, how did you deal with that?

I didn’t feel any fear while writing it, which is probably why I managed to be so truthful. But I definitely felt some trepidation once my wife Emily suggested that we actually produce the play. I immediately pictured my octogenarian parents sitting in the front row, watching their former-altar-boy son do blow for ninety minutes! Luckily, that feeling passed by the time I had my final draft. I used to joke that I’d be a hell of a writer once my parents died. But I’ve reached an age where writing about certain topics is no longer off limits, no matter how bad it might make me look. 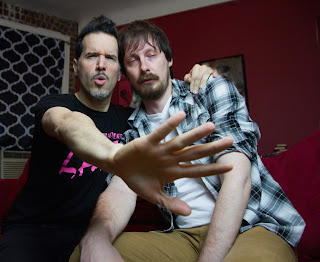 What has been the development process?

KYLE started as a couple of small scenes. I’m a big dialogue guy, so I just had two characters talking
to each other. Then I realized one was based on me during a very tumultuous time in my life. I wasn’t sure who the other character was. A few more scenes made it clear to me what was going on with those two. Before I knew what happened I had half the play written, and my wife, Emily, said, “We’ve got to produce this.” We filed paperwork to form Hot Tramp Productions later that week.
I don’t have much experience producing indie theater, but I do know this is break-neck speed compared to most shows’ development!

What is it like working with your spouse as your director and co-producer?

It’s great. I love that we get to share this experience together. I also can’t imagine trusting anyone else with a story so personal to me. Whenever you do anything creatively, you need at least one person you can always count on—because there are armies of people lining up to say “no.” My best friend, Ted Alexandro, and I found that out making our web series, Teachers Lounge. We were always there for each other, stoking each other’s confidence and manufacturing positivity. Emily and I have different skill sets that compliment each other well. I never doubted Emily and I would succeed, because everything we do is always better when we do it together. That’s why we got married! 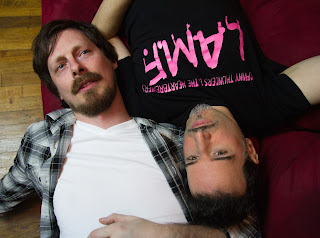 I mostly write early in the mornings or late at night. I think that comes from my background in magazine publishing, where I was constantly on deadline. When I get an idea, I write as much as I can as fast as I can. I don’t judge it; I just keep going until I reach a point where I get stuck. An important part of my writing process is sleep, which is never easy for me because my mind is constantly racing. But when I finally manage to get to sleep, I usually wake up the next day with answers about where to go with the story.

I’m still drawing inspiration from a lot of the same figures that made me want to be a writer in the first place. I’m a big non-fiction fan, so in the last two weeks alone I’ve read books on Billy Wilder, Preston Sturges, The Kids in the Hall, The Compass Players, and am currently reading a biography on my beloved Peter Cook. There’s always going to be a special place in my heart for all those people who created the art that hooked me as a kid. These days—where art itself is under attack—I like being reminded of the impactful and transformative power wielded by artists.

My pal Ted and I are at work on a new full-length screenplay. It’s in the hush-hush stage right now, but we’re hoping to go public very soon! 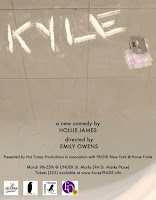 Only that the cast Emily and I have assembled are the ideal actors to present this gritty little play. They totally got what Emily and I were trying to do from KYLE’s very first read through, and we feel lucky to have them onboard. I can’t wait for show time!

KYLE will play UNDER St. Marks March 9-25, Thursday through Saturday at 7:30pm. Tickets ($25) are available online at www.HotTrampProductions.com