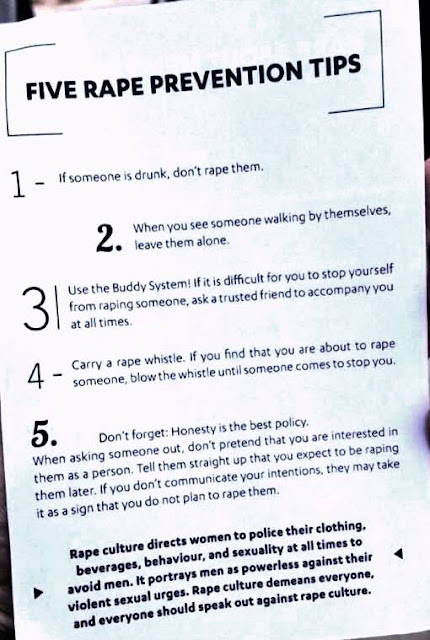 HOW TO SELL YOUR GANG RAPE BABY* *FOR PARTS is a comedy about internalized misogyny, rape culture, and the road to being your best self. It was born from a site-specific series of short plays set in bars that ran in NYC called Sticky. Co-producers Libby Emmons and  Ali Ayala (dir/co-pro) appeared together in a series of these shorts featuring the characters "Ali" and "Libby". These shorts became HTSYGRBFP.

An earlier incarnation of the play (titled PUFF PUFF) won “Most Offensive” in Jacquetta Szathmari's Festival of the Offensive in 2014 (dramaturgical support from Brad Rothbart and directed by Michael Domitrovich). Michele Travis (Sticky co-producer 2015-2016), directs HTSYGRBP for Horse Trade’s Frigid Festival this month and spoke with Libby about the play.

How did you choose the title?

The play was born with the name Puff Puff, and when asked what it was about by Festival of the Offensive producer Jacquetta Szathmari, I said "it's about how to sell you gang rape baby, for parts!" And she said, "that should be the title." So I changed the title. I've gotten some push back, mostly from people like my mom, and I've been sort of concerned about that whole trigger thing, but I figure it will draw the crowd that would enjoy having their buttons pushed, or at least I hope so.

What's the origin story of the Libby and Ali characters (also known as The Pusses)?

Libby and Ali are modern women who don't like working for a living, and can barely get with the pretense of living at all. That sounds bleak, but really it's funny.

The plays started as shorts for the Sticky series. Mostly about trips, more like misadventures. Then they got a little political, then more political, until finally you have what we have here, an anti-Trump, post-feminist, satirical dark comedy inspired by the true events of house party gang rape, human and organ trafficking, sex dolls, extreme body modification, and a whole bunch of other things that are really about how much everyone hates women, or at least loves us to death.

What did you change when you decided to rewrite the play for this Trump-era Frigid Festival run?

Mostly what I changed is that the fun-loving, life-affirming intern who gets knocked up the hard way is a Trump supporter. But also the pusses (aka Libby and Ali), are spurred on by their need to take positive, political action in this new dumpster-fire atmosphere of these United States.

Most of your plays are comedies centered on women characters, and deal with things that are usually not considered inherently funny.  When the Libby/Ali shorts were performed at Sticky, I remember the women in the audience were the loudest, longest laughers, while most of the men looked really uncomfortable.  (This is one of the reasons I love directing your work -- it's hard for the audience to just sit there and not have a point of view.) Are you deliberately trying for this effect?  To make women feel less alone, while discomforting men?

No, I just write as honestly as I can. I had a professor at Sarah Lawrence, Cassandra Medley, who said "go to the place where you're afraid, and start from there." I still do that. Another guiding principle is this: when I was a teenager hanging out in bookstores, I searched the shelves for books about me, about what I was experiencing, about my perspective on the world. I was looking for a friend in a book. I often looked to women authors, and instead I found these depressive figures-- sad Ann Sexton, sad Sylvia Plath, sad Virginia Woolf, over-sexed but prudish Anais Nin. The closest I could get was Dorothy Allison, and yeah, she's good, but like... So I write for the me who is sixteen, looking for a friend just like me in a book, and to her I say: have a laugh, I love you, it's all hell, but it's all brilliant, and you are brilliant, and you make existence worthwhile, and I am just like you, and we matter.

What are you working on now?

I've been working on a novel about 13 year-old best friends who have to face their worst fears in order to find out who they really are. It's called Emmy Archer and the Mad Secrets, and I just quit my job to write it. I'm working on the developmental reading end of a full-length called Hippopotamus, with actress Richarda Abrams, about the stay-at-home artist-mom in a two-mom family, who has to readjust her expectations and question her priorities when her son is recommended for special ed programs. I have a one-minute play coming up in the One-Minute Play Festival at The New Ohio in early March. I'm working on As I Lay Dying with Live-Series. Also I'm trying to get my son through first grade, which is both less easy and more fun than I thought it would be.

What do you most enjoy about making theater?

The part where it's super scary and you feel like you can't possibly do it and then you do it and it's a blast and the lights feel warm and so do the laughs. 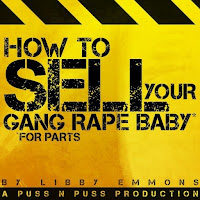 HOW TO SELL YOUR GANG RAPE BABY* *FOR PARTS runs in the Frigid Festival at the Kraine Theatre, NYC, February 18th – March 4th. Advance tickets are available online.