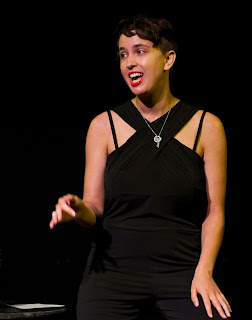 What made you decide to write and perform this show?

Diana Oh. I saw her first solo show, Diana Oh Is Going Rogue, at IRT (where Baby Mama is happening!) in 2013 - about six months after I'd had my son. (She also makes a number of appearances in Baby Mama, as "Didi.") For most of my life, pretty much anytime I'd seen a solo show, I'd always thought, "This would be better as a traditional play with characters played by different actors who talk to each other." The only exceptions were Mike Daisey's work and I Am My Own Wife. But with Diana's show, I saw, "Oh. The medium IS the message, and she is her own medium." I saw how simple a solo show could be: just tell your story and be honest and open.

I also talk a great deal in the show about feeling profoundly alone with this experience, because no one around me knew what I was going through and despite the incredible love and support I was shown, it was still really isolating. I feel like this show is the closest that I can come to making people really know what it was like for me. And a huge part of that is that they're looking at the person who went through it - that it's a true story.

Many people may know you as a playwright primarily. Do you have performance/acting in your background?

Not to brag, but I won "Best Actress" my senior year of high school for playing Frenchy in Grease, so you're looking at a pro here. Actually, that was the last time I performed something longer than ten minutes; I did The Vagina Monologues and some scene study in college, and occasionally I'll get onstage and rap about vegetarian girls or do some burlesque, but I didn't really get back into acting until Baby Mama. And now that I'm here, I've got even more respect for actors than I already did. This shit is exhausting.

What has been the biggest challenge/obstacle in creating this piece?
- also, in performing it?

Talking for that long. Seriously. Try it sometime. Your tongue dries out. Honestly, writing it was the easiest part, because I have very little filter as it is, and I don't mind writing down the words "and then I went to an orgy" or "then I cried for a month" or whatever. Performing it is infinitely harder. I've got to, like, stop eating pizza for a month and not drink alcohol and be very very conscious about every single thing I do to my body. I can't believe that actors have the willpower to live this way all the time.

What has been the unexpected rewards in both?

Hearing a whole audience sniffle in unison. God, it's the beeeessssstttt. Or the stories I get afterwards. "You made me want to find my birth mother." "I would've had a kid by now if I'd had the money; thank you for talking about the financial aspect of this." "I lost custody of my daughter in the divorce and I felt just like that." People respond to heart-opening with heart-opening and it's really really moving.

You recently launched your Patreon profile. Tell us a little about that.

Patreon is amazing! Patreon is the future! For those who don't know what Patreon is, it basically takes the crowdfunding model of Kickstarter or Indiegogo and makes it ongoing and sustainable. So people sign up to support you on a monthly basis (or sometimes per thing that you make, per song or per video or whatever). Right now I've got 55 patrons and I'm getting $167/month from them, or $2000/year. In exchange, they're getting Cool Insider Shit. Behind-the-scenes photos and videos, exclusive pictures of my cat, postcards in the mail, deleted scenes or works-in-progress, and if you pledge $10/month or more you get a video of me singing a song of your choosing. They're supporting me because they believe in me and they want me to keep Making All the Things. It's also a way to circumvent the antiquated, gatekeeper-guarded, not-remotely-artist-centered venues and structures for Making Things. Go straight to the people who want to see you succeed, rather than keep competing with a million people fighting for the same, like, ten opportunities. It's way more efficient and way more connected.

This was something I wanted to start for years before I did, and part of why it took me so long to start was because I couldn't see how the platform could work for playwrights. How do you create an online, virtual support system (and reward patrons appropriately) with an art form that is so stubbornly and relentlessly live? Only once I started really spending a lot of time on forms of writing other than theater - namely, fiction and nonfiction - did I feel like, OK, it makes sense to ask for pledges for this. Here are some forms of writing I can share with my patrons that aren't, like, paling in comparison to the way it's actually supposed to be consumed. I do think that Patreon would be a fantastic platform for theater companies who make work on a more consistent basis than mine does. Like, I think Flux Theatre Ensemble is a prime candidate for Patreon. Talk to me, Flux!

(And if you wanna support me on Patreon and be part of the revolution, you can do so here!)

Who are your inspirations?

Where do you see yourself in 5 years? 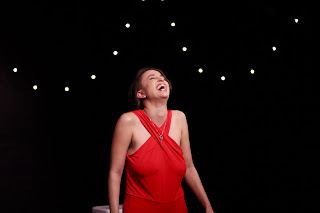 "financially stable, traveling a lot, and doing only the things I want to do," but I have no idea. Anything between "famous show runner" and "still temping" is possible. I just did a "Plan Your 2017" worksheet thingie, and it looks like last year I did approximately half the things I wanted to do, so if I keep up that rate of success I'm probably in really great shape!

How do you organize your days since you run a theater company, are writing a YA book, performing and the myriad of other things you're doing?

It's SOOOOO HAAARRRRRD. Champagne problems, for sure. I no longer have a "day job"; I quit a year ago and now I'm freelance full-time, working from home, 100% my own boss. It's AMAZING. It's exactly what I want. But it's SO HARD. It's hard to prioritize, it's hard to keep all the balls in the air, it's hard not to get bogged down with busywork. I have a project management app (Asana) which I just use as a to-do list. And I use the "snooze" function in Google Inbox a lot, so emails come back when I need them instead of just sitting in my inbox staring at me and taking up valuable space. But, I don't really "organize" my days, I just wake up and start flailing around. I have an amazing daily planner and I'm just not using it at all. I really do want to get organized. I did a time-tracker spreadsheet yesterday, tracking how I was spending my time every fifteen minutes. It definitely helped me see where I was wasting time. There was too much Facebook on that spreadsheet.

Right after we finish the NYC run, Baby Mama is heading to Cincinnati for a couple performances. Then my YA novel, Squad (about a cheerleader whose relationship with her best friend falls apart), is due to the publishers on March 15th, so I'll be spending February in a mad dash to get that done. I'm also taking Baby Mama to the Edinburgh Fringe Festival in August. No idea what's happening in between. It depends on a lot of things that are out of my control. Which is actually fine with me because then I don't have to do anything until I know. I'm all about having fewer things to do right now.

I love my son. I love my community. I love you.

Baby Mama: One Woman’s Quest to Give Her Child to Gay People is produced by Caps Lock Theatre and Jack Sharkey and directed by Sara Lyons. It runs through January 29th at IRT Theater located at 154 Christopher Street, 3rd Floor Theater. For more information and tickets, go here.