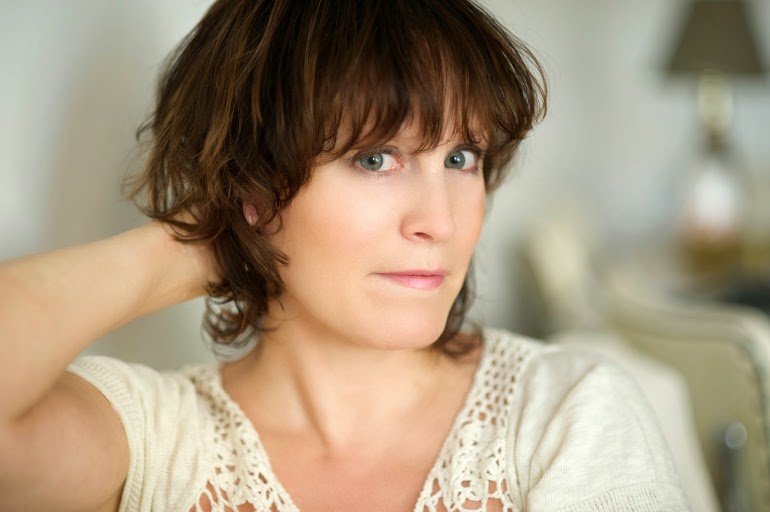 "... they seem to represent the two sides of - what is deemed to be - a woman's psyche. In other words, the 'good' wife and mother versus the 'bad' sexpot.."
-Sheri Graubert
Playwright


What is Jackie & Marilyn about?

It is a play about loneliness, love and sex. The price these women paid for loving this particular man. Of course, it is fiction. Informed by historical research, but still fiction. Marilyn and Jackie didn't actually meet.

What was the inspiration or how did writing this come about?

Sanja [director of Jackie and Marilyn] commissioned me to write a play on the subject. I did a little digging to see if I would find this an interesting topic about which to write and became fascinated by our culture's obsession with these two women.

I was drawn to the subject matter partly because, they seem to represent the two sides of - what is deemed to be - a woman's psyche. In other words, the 'good' wife and mother versus the 'bad' sexpot. Obviously, these are clichés but they still inform and influence the way women are raised in our culture. To this day, when I do work in high schools, young girls still talk about being jammed into these two categories - if you are sexually precocious and curious, you are labeled a [fill in the blank - there are a million interchangeable derogatory terms] or if don't experiment sexually, and be 'good' then there are quite a few judgements about that option, too.  It blows my mind that there is still this judgement around women and sexual expression and experimentation, while for the young boys, it is the opposite.  And, then, there's JFK who doesn't think twice about what he got up to. Apparently, he called it 'girling', which sounds like an Olympic sport. Given the alleged amount of women he slept with,  it seems he was going for gold. 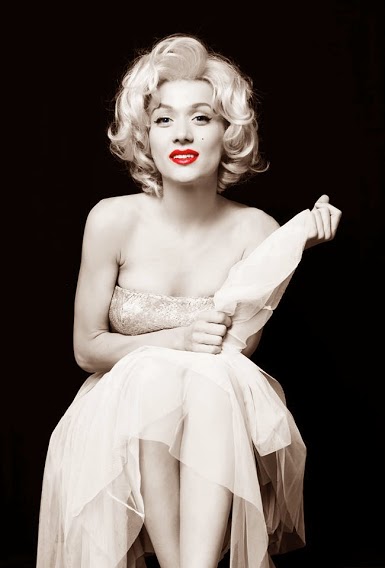 So, that was a starting point in the exploration of these two women, along with how hard they worked to cultivate their particular images.

What was the development of the play?

I met with the actors and director and we talked about our perceptions of these women. There was a lot of discussion about sex and relationships. Meanwhile, I was reading a million books on the subject matter and watching endless videos. Every book, every source has a point of view, and they all seem to contradict each other.  It is an enticing subject because there is still so much secrecy about it.

At first, I tended to read books about Jackie and watch videos about Marilyn. But, that soon switched. I quickly fell in love with both women but I particularly admire Marilyn and everything she achieved in her life, given her childhood.

I did not have long to write the play - six weeks. I had to go into a writing 'tunnel' holing myself up for hours in The Hungarian Pastry Shop, hammering out a script, first draft, second draft, etc.

In rehearsals, I was able to cut and rearrange according to what was happening in the rehearsal room. Sanja had some radical reworking which we would discuss - for example the second Marilyn/Jack scene was originally before they went upstairs but Sanja wanted it after they had had sex - so I rewrote the scene to be more appropriate. I now quite like the contrast between their passionate sex and Jackie's tour of the white house.

How did you meet the director Sanja Bestic?

Sanja cast me in a play about four years ago called The Weeping Gameby Branislav Nusic. It was fascinating working with her. She has an entirely different approach than western directors. It is highly respectful of actors.

How do you work together? Is it different than other collaborations and how?

Sanja is a European auteur. She has a vision and she pulls together all the different elements to create her vision on stage. So the music in the production? That's not in the play, but she wanted a movie feel to the piece as a comment on the power of movies and movie stardom at the time. Sanja always adds a meta level to her productions. There was a very clear example in her production of my play, Tesla. Tesla was obsessed with threes, so Sanja always had the actors stand in triangle arrangements. It's subtle, but it's there if you know to see it. With this production, it was all about the apparent transparency and opacity of their lives. How they lived so much of their lives in the spotlight whether they liked it or not.  So, there is a lot of reflected light in Yon's amazing set.  Music underscores certain scenes and not others, as in a movie and there is almost a movie montage at one point.  Marilyn gradually moves into the Jackie and Jack's playing area as she increasingly dominates their lives. Marilyn is completely naked as she emotionally gives herself completely and utterly to Jack (who rejects her). 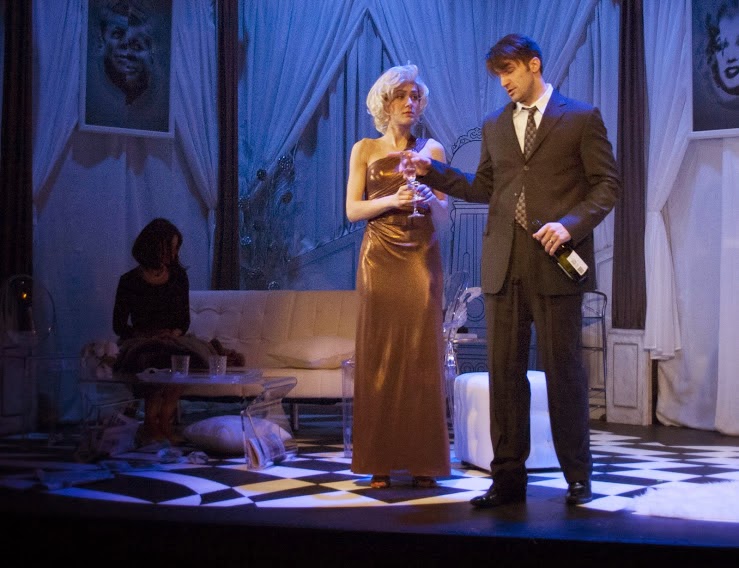 Honestly? I think I always wanted to write. I wrote my first play when I was 10. Perhaps younger. I have a recording of it! But, the theatre world in England sort-of frowned on artists who did more than one thing. I play saxophone and worked a lot as an actor-musician, and the perception seemed to be, 'oh, you aren't that good at either so you have to do both.'  So, I never allowed myself to write, sadly. In New York, it's the opposite: 'Oh, you can do both? That's amazing!' New York freed me. I was involved in the downtown scene and became inspired by the downtown triple-barrelled artists, you know: actor-writer-producer; singer-actor-director, etc. The writing voice in my head got so loud I could no longer ignore it so I started listening and typing - two women, two sisters - it became my first play. Last Word. Pam MacKinnon directed the staged reading at the Neighborhood Playhouse.

What is your writing schedule or not-schedule ;)

As a multi-talented theater artist, mother and wife - how do you balance everything?

Well, first of all, thank you.
Second of all, I DON'T KNOW!!
I get up early and do my stuff. Then the household gets up and I engage with their stuff.
I would love 28-hours in a day, can you arrange that?

Ha ha! That's like asking 'Are you a Marilyn or a Jackie?' As soon as I choose one my mind immediately goes, 'oh, but....' If I had to choose one because my life depended on it (glad I don't live in THAT world), I'd say salty. Except for extremely dark chocolate. Usually, in the evening. And in the late afternoon. And... 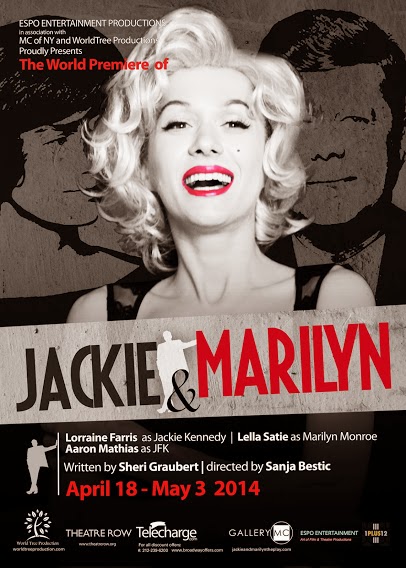 I am about to go on vacation. Yes! Then, perhaps write a book. I've just co-created a wonderful piece of immersive theatre with high school students about GMOs and they are going to act on a Broadway stage (courtesy of the Roundabout Theater Company) in May! Very excited for them. It is such a fantastic piece!  The kids have been incredibly imaginative and funny. I wish more people could see it. We need to adapt it from being immersive to the proscenium at the American Airlines theatre. So, the adaptation starts next week.

Also, I am currently branching off my theatrepreneurs blog from my personal website to it's own space - theatrepreneurs.com. And, of course, rather than make it easy and pay for someone else to do it, I am building it myself. The upcoming interview is with Daniel Talbott and it is absolutely, fantastically inspiring. A must-see to all theatre artists.

Micheline, you rock. Can I add that? Add that.

Jackie and Marilyn is playing until May 3, 2014 at the Lion Theatre. For more information and tickets click here.