Playwright Rosemary Moore and Her New Play Side Street

"Artists must be patient.  Artists must have faith and continue!  Do it or you will never know!"

What was the inspiration for SIDE STREET?

The inspiration for SIDE STREET was a recurring dream I have had since my mother died when I was 21 years old.  The dream has many variations but its core is always that I see my mother alive…she is kind of sick but amazingly alive. A couple of times in the dream I’d introduce her to my friends. In some, I’d see her at a gathering. Once, I dreamed that she had her own apartment on the Upper East Side of Manhattan. That apartment dream sparked the writing of a scene which sparked another and so on. I wrote many, many, many scenes over a couple of years, and then pulled them together into the beginnings of a play.

What's the play about?

It takes place in a bewitched,  parallel universe where 48 year old Meg encounters her long dead mother, Dora, very much alive and on her way into the Upper East Side apartment building where Dora now lives.  During their afternoon together in her mother’s apartment, apparently frozen in time, Meg witnesses her mother’s love affair with a Navy lieutenant, which occurred many years earlier, when Meg’s father was in the Marines, fighting in World War Two. As Meg nurses her dying mother for the second time, she discovers her own mortality and her capacity for forgiveness, coming of age at last in middle age.

What has its development been?

The very first reading was in the informal salon of my friend Rita London’s living room in Brooklyn, directed by Hayley Finn.  Then, a couple of years later, I had it read at New Georges, directed by Daisy Walker.  By about 2006, Ian Morgan directed a reading of it at the New Group and from then on Ian read draft after draft and was the only director.

I wrote other plays in between.  A few years later, we did a reading at the Old Stone House in Brooklyn with actor Jan Leslie Harding who GOT!  the daughter's  role (Meg) so completely that I felt fired up and launched to push on!  The last reading before this production was at The Barrow Street Theater, again with Jan Leslie Harding, in the spring of 2011.

After that reading, Ian and I thought the play was ready for production.  I sent it around to a few theaters, who read the play, but got no bites.  A year later, I told Ian I didn’t want to wait for a theater to produce it,  I wanted to do it.  He said he would direct!

How did you meet Director Ian Morgan? 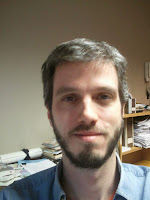 I met Ian after a reading he did at St. Clements. I don’t remember what it was but I introduced myself and he said he had read and liked my play Aunt Pieces which had just been done at the Cherry Lane Alternative in the Mentor Project.  I kept in touch with him and joined a playwriting group he lead.  He directed a reading of my play Continuous Bloom now called A Slight Kidnapping.

Eventually I showed him SIDE STREET which he responded to and read drafts of.

How do you guys work together?

I send him a draft.  He reads it and then I come in to his office at the New Group and we chat.  Looking back, what was amazing to me, in the case of SIDE STREET, was how rough and unformed the play was at the point he read it.  His comments were always directed so succinctly, accurately and intuitively to where the play was in its development.  He’d meet me where I was.  I do another draft and come back.  Sometimes it would be almost a year before I’d come back since I was raising my kids and teaching and writing other plays.  It seems like our collaboration has been one long conversation!

I came to playwriting by mistake.  When I first moved to New York, I was a fiction writer, writing short stories and trying to get them published which I did in the early 1980’s.  At some point I challenged myself to write a short novel (a rough, rough draft) in a month. Ha Ha. I did it in a month but …something happened!

I allowed myself to write as “badly” as I wanted. I wrote in long-hand five pages a day, single-spaced, in a spiral notebook, while listening to a Spanish-speaking radio station for distraction.

I had a basic plot, characters, and the number of words and amount pages it had to be.

About half way through the writing of this rough draft, the mother character, Tracy Lusk, took over.  She was supposed to be dead and only a memory to her two teenage children but Tracy literally hijacked the story and the novel went from third person to first person (Tracy!).  After her 20 page monologue ended, the book became all dialogue. I turned the novel into a play called Raindevils which included the monologue.

The monologue from Raindevils, was published in BOMB magazine and soon after that, I started writing other monologues of characters for myself to perform around downtown performing spots like Dixon Place and Franklin Furnace.

After I had my kids and was living in Brooklyn, I stopped performing and applied and got into get the MFA at NYU Dramatic Writing Program.  I used Raindevils (which I had expanded to a full-length play adapted from the rough novel) as my writing sample!

What is your writing schedule if you have one?

I don’t have a writing schedule!  I write if I have a deadline.  I used to be VERY blocked.  That’s why performing helped.  People were going to show up at a certain place at a certain time and I had to give them something.

At NYU, I studied with Maria Irene Fornes who had her students write in class from her prompts.  A few of us from that class kept doing this group writing after we graduated.  Lizzie Olesker, Aurorae Khoo, Gary Winter and others.  There have been many writers in and out of the groups (Jo Andres, Lisa Shea, Rachel Koenig, Ann Rittenberg).

I wrote whole plays (rough drafts)  in those groups.  I am not blocked anymore! Now I can work alone!

Salty and sweet…bitter thrown in for balance.  Also the physical world and randomness must be included.  But for me, the most important thing after “write don’t think” is STRUCTURE which can be anything, but which lets me feel free to write.  For instance, it can be….I am going to write a play that is two friends at breakfast.  Or I get myself to find a silly description from a book that describes plots of every movie ever made.  Use part of a plot and write a ten-page play.  STRUCTURE!!!   That was the hardest thing to learn, and I came to that after many years of not quite getting how STRUCTURE is my friend!

What do you love to do besides writing or theater?

I like going to the movies.  I like reading.  I like drinking coffee and talking to friends.  I love going to extreme places in nature and hiking or sitting and watching a body of water or light change.

What excites you about theater right now?

I like the originality I see in the good shows I’ve seen in the last few years.

I like going to see Clubbed Thumb’s season!  I liked the bravery and smarts of 13P’s years of productions.  I loved seeing my friends Lizzie Olesker and Lenora Champagne’s brilliant show TINY LIGHTS which they produced themselves at INVISIBLE DOG…which gave me the spark and nerve to produce SIDE STREET.

I like being surprised by a play because of one actor’s performance.  This summer I went to see my friend Marian Fontana’s wonderful short play Falling Short  at the SUMMER SHORTS 2013 at 59 E. 59th St Theatre. There was another play that evening called PINE CONE MOMENT written by Alan Zweibel which was touching and funny.  In that play, there was a performance that was so good and so surprising that I understood, all over again why people go to the theater.  The actor, Camille Saviola, playing Bunny,  lifted me out of my seat. She was so true and funny because she held nothing back and entertained (in the deepest sense of the word). She is a sublimely skilled artist…who wasn’t afraid!

What do you find challenging or frustrating?
Challenging:  Everything takes so long!!!!!  Artists must be patient.  Artists must have faith and continue!  Do it or you will never know!  Write “THE END” to your play and see what you’ve got.  It took me a very long time to understand this.

I couldn’t have done it without my different writing groups. Right now, I am in a weekly Tuesday night group with writers of many different genres.  Showing up at the group keeps the work coming.

I don’t quite know what’s next.  I have a play set in the early 1980’s at the artist bars in Tribeca called  Bar Play: Opium Wars.  My friend, Hugh Crawford is determined that I finish it…it might have to be site specific!

ROSEMARY MOORE (Playwright): Her play The Pain of Pink Evenings is included in the Best American Short Plays of 2001 (Applause Books). A Slight Kidnapping, The Bar Play, Aunt Pieces, The Pain of Pink Evenings and Pineapple have been produced or read at the Cherry Lane Alternative, The New Group, New York Theater Workshop, New Georges and HERE. Pulitzer Prize Winning playwright Tony Kushner, Ian Morgan and Michael Sexton have directed her plays. She received an MFA in playwriting from New York University and is an adjunct professor of composition at Rutgers University.

IAN MORGAN (Director) is Associate Artistic Director of The New Group, and in May he directed REALISTS by Serbian playwright Jelena Kajgo, at HERE Arts Center.  He also directed A Spalding Gray Matter by Michael Brandt, Critical Darling by Barry Levey, Rich Boyfriend by Evan Smith and the Drama-Desk-nominated The Accomplices by Bernard Weinraub, all at The New Group. Other productions includeRough Sketch by Shawn Nacol, Ham Lake by Nat Bennett and Sam Rosen, Sparrow by Linda Faigao-Hall, Progress by Matei Visniec, and Eric Larue by Brett Neveu (the last two both at HERE).