How You Can Make the Sweethearts of Swing Sing! 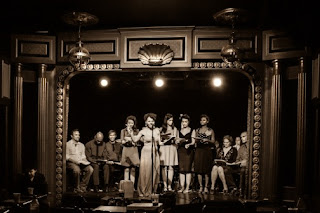 "... inspired by the true stories of interracial all-female swing bands of the 1940s and the white women who "passed" as black in order to play with them."


Tell us about The Sweethearts of Swing?

The Sweethearts of Swing, is a new Play with Music:  In 1943 Mississippi, a young trumpeter has the chance to fulfill her dream of playing with the hottest all-girl swing band in the country. There's just one catch: she's white, it's a "colored" band, and this is the Jim Crow South.

What was the play's development?

The script has been in development for a year, and has had a handful of small readings. The largely original score (with a few arrangements mixed in) was developed in the last 5 months, and we had a tremendously successful 29 hour reading with a live band on July 16 at the Triad.

What was its inspiration?

The Sweethearts of Swing is a work of historical fiction, inspired by the true stories of interracial all-female swing bands of the 1940s and the white women who "passed" as black in order to play with them. Though all of the characters are completely fictional, many of the play's events are drawn from actual stories.

How good is SWEETHEARTS OF SWING? from Natalie Wilson on Vimeo.

After the tremendously successful staged reading in NYC on July 16, the likely next step for SWEETHEARTS is an out-of-town tryout or workshop with full-size band, for which we need to be able to submit a demo CD along with the script.

The Sweethearts of Swing is written by Natalie Wilson, with music by Kat Sherrell. Contrubite to their Indiegogo campaign and get cool stuff and be part of making new work happen! Yay!