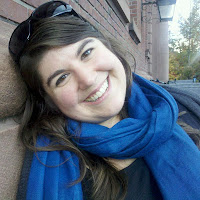 Playwright Mariah MacCarthy: How do you go about directing a four-dimensional script like this one?

LETA: Very carefully. :) It's an experiment! As you'll remember, on the first day that you brought the script in, it took about half an hour to explain to everyone how to read it. To explain further to readers, because there are often multiple concurrent conversations happening at once (just like at a party), there is a master script and color coded insert pages. Literally every actor's script looks different because every individual has a different trajectory. During our first read, actors moved about the space so as to be close to whoever they happened to be talking to at the time while I sat on the floor in front of a coffee table, with two piles of scripts in front of me, following along with all of the action points at once and noting where they intersected. It's kind of like a giant puzzle and a team of 12 people are working together to make the pieces fit.

All of our rehearsals have been purposefully in apartments so that we could always have a sense of a real 3 dimensional space. We've never seen the fourth wall during this entire process. Sometimes in rehearsals I just say "go" and then my AD, Trent, and I scuttle around the space to watch what happens and take notes. Other times, we've met with smaller groups to do individual scene work. This whole process has been hugely collaborative with the cast as they have developed these characters before, during, and after Mariah's script writing. For example, there may be times when a character is not accounted for in the script and the actor must fill that time in-character while still at the party and interacting with guests. It's been a huge learning curve for all of us and every day is a new adventure.

M: What in particular resonates for you about the story(ies) we are telling?

L: When you, Mariah, first approached me with this idea, you talked about the loss of innocence that we experience as children. Those moments bond us forever to the people who were around us at the time. Who experienced those losses with us. We all carry baggage from our childhood, especially at this moment around 10 years old, in fifth-grade, right on the cusp of puberty. We become more self-aware, more aware that we are different than the people around us. Some children deal with this by becoming more sociable and finding their clique, others retreat into seclusion, still others become bullies out of fear that they will themselves be looked down on if they don't stay on top.

In MRS. MAYFIELD'S... the characters are 20 years removed from all that but many of them have not seen each other since that highly impressionable and developmentally important time. So as the alcohol flows, memories and emotions long since buried come bubbling up from the depths. They are forced to confront each other with everything that wasn't said 20 years ago and everything that has shaped who they are now. That is compelling to me.

M: What have you learned about working this way (whatever "this way" means to you)? 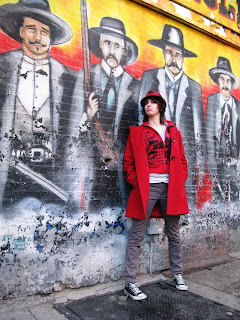 M: What do you like about directing projects that start with no script? What are the challenges?

L: I like that there is so much room for collaboration and that anything is possible. In these situations where you literally start with almost nothing, so much of the personality and genius of ALL of the people involved becomes apparent in a very real way out of necessity. It's exhilarating and it's absolutely terrifying. And so much freaking fun. I laughed so much in rehearsals. You never know what's going to happen.

Of course, with a process like this, it would wonderful to have more time. I could spend months, a year, more with these characters. It was also challenging to direct concurrent scenes that overlap with each other. I constantly wondered if I was doing enough text work with the actors. Blocking in an apartment around invisible audience members is a challenge too. There has been a lot of experimentation in this process and despite the challenges, I think that we've hit a good balance.

M: How awesome are these actors?

L: These actors are the AWESOMEST group of people. They are so fearless and brave. I am so so proud of them for putting it all on the line and diving in without many answers. We were making up the rules has we went along. And these incredible actors not only rose to the occasion but they have surpassed my expectations. They are incredible. You should see them work it.

"Mrs. Mayfield´s Fifth-Grade Class of ´93 20-Year Reunion" presented by Caps Lock Theatre, will play at an undisclosed location in Astoria, near the Ditmars Blvd. N/Q subway stop. Audience members will receive the location upon purchasing their ticket. Performances are Friday May 31-Sunday June 2, Thursday June 6-Sunday June 9, and Wednesday June 12-Sunday June 16. All performances are at 8pm. Tickets ($18) may be purchased online at here or by calling 1-800-838-3006.