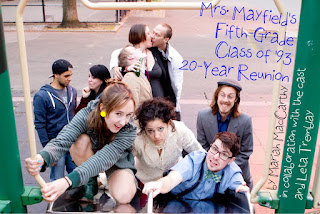 "I had people making out on my couch and dead in the bathroom and screaming and it was just awesome."
-Playwright/producer Mariah MacCarthy
Caps Lock Theatre

Director Lisa Tremblay: Tell me again why you wanted to create this play with me in the first place!

Playwright/producer Mariah MacCarthy:  I guess this is a two-part question...why this play, and why with you. So, part 1:

This was actually an amalgamation of two different ideas: a party play, and a loss-of-innocence play. I wanted a play that was literally a party. I wanted the audience to be able to wander around and feel really awkward being at this party where people were at each other's throats. I just had no idea what that party would be.

And in another part of my brain, there was an idea for an ensemble-created piece about that moment in your childhood when you lose your innocence, when you realize it's not all gonna be OK. I think the movie of Where the Wild Things Are captured that moment beautifully, in a way that honestly had nothing to do with the book, but I was OK with that. Anyway, at a certain moment it occurred to me to combine the two.

But before that moment, I had already asked you to do this party play with me, because I know that you put actors at ease and that you like creating work somewhat unconventionally, and because doing a project with you feels like going on vacation.

What has been the most challenging about writing this particular play?

How do I choose? Well, as you know (but the fine people of Theaterspeak may not), we didn't start with a script. We just started with some kick-ass actors with some very vague/sketchy character ideas and a few plot points. So we actually started by improvising and just playing around in the room, developing these characters further, which culminated in one long improvised party in my apartment.

I gotta say, that was one of the coolest moments of my creative life. I had people making out on my couch and dead in the bathroom and screaming and it was just awesome.

The challenging part about that night, and about this whole process, is that there are nine damn people in this play, and they're all doing their own thing at any given moment of the play. So I had to rely on you and Trent (our kick-ass assistant director) to see things that night that I couldn't--literally, because they were happening in different rooms. And in order to rehearse this play with the "real" timing of everything, we still have to kind of do everything at once, which means that any one of us will miss something in rehearsal.

Writing a full-length play in two weeks was also REALLY hard. I've never done that before. Especially when that full-length play involves constant simultaneous action. As you've said, I basically had to write nine different plays, one for each character. And that script still had tons of holes in it where characters were just unaccounted for, and figuring out how to fill those holes is mad challenging too. This is maybe the most difficult rehearsal process I've had in my adult life.

What has been the most rewarding?

Again, so hard to choose. I am perpetually blown away by how these actors have just stepped up to the plate. They continue to fill in blanks and flesh these characters out and play with each other. This play requires the performers to be very, VERY present and listen constantly, and they do it. Watching them take this crazy idea and process and run with it has been so gratifying.

What are you most looking forward to in performances?

I think audiences are going to be over-stimulated in a good way. I think they'll want to come back. I think they're going to be genuinely surprised by where the evening goes. I think this is a project that absolutely begs for an audience and can't really be gauged without one. I'm looking forward to seeing what people pay attention to, where people go, how comfortable or uncomfortable they feel with being fellow "guests" at this party. I can't wait.

Would you ever write a play like this again? Why/why not and what would you do differently?

Absolutely! It's been a blast! But I'd give myself more time.

Mrs. Mayfield's Fifth-Grade Class of '93 20-year Reunion will play at an undisclosed location in Astoria, near the Ditmars Blvd. N/Q subway stop. Audience members will receive the location upon purchasing their ticket. Performances are Friday May 31-Sunday June 2, Thursday June 6-Sunday June 9, and Wednesday June 12-Sunday June 16. All performances are at 8pm. Tickets ($18) may be purchased online or by calling 1-800-838-3006.