"The lady without mercy was the force that made him write. And I generally write that way. When the muse is forcing me to."
- Playwright Johnna Adams

This is your fourth play produced with Flux Theatre Ensemble. How is it working with the group and with the co-founder of Flux and director of Sans Merci Heather Cohn?

I love Flux. You couldn't find a nicer bunch of theater folk in the city. And even though I'd worked with a lot of Fluxers when the Angel Eates Trilogy was produced in 2008-- this is the first time I've gotten to work with Heather Cohn, or Flux friends Alisha, Rachael and Susan-- all of whom I have loved from afar and been very excited to one day work with. So it was something of a dream project to get all of these talented women together on the same play. I really enjoyed it.

John Keats poem “La Belle Dame Sans Merci” was a reoccurring element in the play as referenced in the title. Did your concept for the play start with the poem or did that come in later?

The poem came later. I wrote this script very quickly-- in about five days. All of the research came in at the point it was needed. In the first scene, Elizabeth asks about how Tracy and Kelly met. And Kelly introduces the poem into the story. While writing it, I literally stopped writing at the point where Elizabeth asks how they met, decided it would be in a women's studies literature course and did a google search for syllabi from that sort of class-- and I found a syllabus where the professor had included La Belle in a similar feminist literature class. I knew from the title without reading it that this was Tracy's oral project, and it then became an integral part of the play.

What were some of your other inspirations for Sans Merci and how did this intense and heartbreaking story develop for you?

My freshman and sophomore college roommate died of a heart condition the summer between my sophomore and junior year and this play is dedicated to her. Jane. I wrote it after a weekend Pataphysics playwriting workshop that Paula Vogel led at the Flea theatre-- the week after. Those were the two guiding forces in writing the play.

One of the central themes of the show was feminism. Would you consider Sans Merci to be a feminist play? And does this come up in your writing often?

Feminism comes up quite a lot in my plays. My latest play Skinless actually features a grad student getting a degree in women's studies in literature and her graduate advisor. They have a long conversation about feminism that defines that play in a lot of ways. I don't actually consider Sans Merci to be a "feminist play." I am interpreting "feminist play" to mean a play that takes a perspective on the idea of feminism as an academic and political movement and promotes or explores it. Skinless may be that. But Sans is a personal story that happens to have some lines about feminism. The girls meet in a class on feminism in art because they are on a journey to define themselves-- and feminism is the political science of defining women. So it is sort of a symbolic starting place for their journey. But not really the point of the play.

The moment in the show referencing Gaston Bachelard’s definition of love (“Love is the intersection of two poetries”) was really compelling. Can you speak to this moment?

This was a definition of love that I found incredibly compelling myself. Mac Wellman recommended this book in yet another Pataphysics class at the Flea (really should have put the Flea Theatre and Gary Winter who organizes those workshops in my special thanks section in the program I am realizing).

I was struggling with Elizabeth's reaction to Kelly's love for Tracy-- how she found it alien, unwelcome, frightening, and threatening-- and I realized that at some level, Elizabeth considers all love alien, unwelcome, frightening, and threatening, not just this lesbian relationship her daughter enjoyed. At the moment she discusses it in the play, she has just devastated Kelly by telling her she hoped Tracy didn't love her.

My feeling was that she was using the Bachelard quote as almost an apology to Kelly. She tells her, essentially, she doesn't believe Tracy really loved her, but then confesses that she doesn't believe in love as anything but a base urge that ultimately disappoints and corrupts. An older woman's advice to a younger more idealistic woman. Don't romanticize love, it is a devastating and unfair emotion that is generally based on shared pathology. It gives the best incite into Elizabeth's private world than any other moment in the play I think.

How has it been running in rep with Honey Fist? Do you feel like the two stories speak to one another?

I do feel like the stories speak together quite eloquently. Stu, in Honey Fist, is stuck on the cliff side that Justin jumped off of-- physically, he can't remove himself for most of the play. None of the friends can, but in particular the way starts his journey in the chair on the cliff and stays there until the final moments of the play is eerily similar to Kelly's journey. She starts the play on the couch, but mentally she is listening to Tracy's final words and is still on the cliff side where she lost Tracy, and it the end of the play she is still there. Both characters are trapped in their grief like flies in amber. And you watch them deal with disruptive people who intrude on this grief and make them confront it in a way they wish they didn't have to (Joey's return in Honey Fist and Elizabeth's appearance in Honey Fist).

The idealized lost friend and love is a huge theme in both plays. You could re-imagine Honey Fist with flashbacks including Justin and you can re-imagine Sans Merci as a play without Tracy-- you see how similar they really are when you reimagine each to resemble the other structurally. I like imagining Sans-like flashbacks for Justin in Honey Fist. He is such a gorgeous tragic character. Tracy has the problem of not having a voice like other people. She can't express herself fully. When she meets Kelly, Kelly becomes her voice. My friend Fengar Gail, who saw Honey Fist with me, pointed out that Justin's problem is that he is an anhedonic-- someone who can't experience pleasure. These are the things that drive both characters to their death. Tracy's voice suddenly erupts and Justin's inability to feel pleasure suddenly overwhelms him in similar ways (although Justin goes more quietly!). 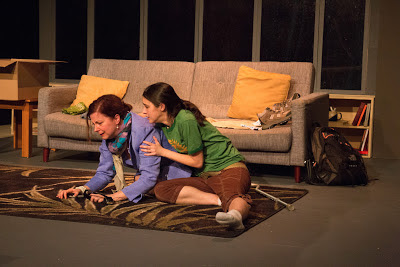 What’s your process when developing a new play?

My process changes each time and from play to play. Usually I will carry an idea around for a while and it will be developing in my head for a long time before I write it. I write when I am seized by la belle dame sans merci, which was actually one of the ways Keats' referred to his muse. The lady without mercy was the force that made him write. And I generally write that way. When the muse is forcing me to.

Right now I am fascinated with inserting prose sections into plays and with all-woman casts. I have a two-woman show (Gidion's Knot), a three-woman show (Sans Merci) and a six-woman show (Skinless) and I am going to try to write plays for 4,5,7,8,9,10,11 women. A decalogue. Sort of a challenge to myself. Picasso had his blue period, I will have my all women show period. My plays Gidion's Knot and Skinless both feature writers who are characters (in Gidion the writer is never seen) and we hear long passages from their writing. I like what happens when an audience is forced to listen like that. So I am inspired by that right now.

Are you currently working on a new project?

I have several things going on at once. I am outlining some pilots. I am working on my rhyming iambic verse play Lickspittles, Buttonholers and Damned Pernicious Go-Betweens in advance of its premiere this fall in Boomerang Theatre's next season. I will workshop Skinless in Atlanta in June at Actor's Express. I am also workshopping the play I am currently writing (the four-woman play) Lingua Ignota at the Kennedy Center in July. That is about a writer, a visual artist, and the artist's two daughters: a manga writer and a realtor on a weekend artists's retreat. Plus 12 productions of Gidion's Knot  in the 2013-14 season around the country. I will probably go to 5 or 6 of those.

Sans Merci and Honey Fist will be playing in rep at the 4th Street Theatre in NYC through May 18. For more information visit the Flux Theatre's Website.