Greencard Wedding is a Creative Match Made in Heaven 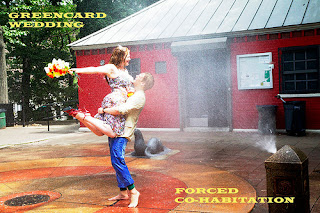 "I get bored with things that are predictable. Mischief is where the magic happens!"


What is Greencard Wedding?

JODY: A band but also an experience. We play a set, tell stories about each other, there’s Frisian Wedding cake, there’s bubbles. We give the audience set list T-shirts and underwear to wear (that we actually play from during the show). There’s a wedding video camera we pass around. It’s a story about two people trying to do what they love together against impossible odds. We make everything ourselves because we have to and it’s fun. We have basically no budget- like most artists who get married. We knew Michael might have to leave America when his student Visa was up so we wanted to create something to keep us connected. So the name Greencard Wedding seemed to be a good band name for us.

MICHAEL: Greencard Wedding is an awesome Indie-Folk Rock band that uses English/Dutch and Beatboxing to make a set sound and look special. We are a 2 person band but there is a lot you can do with 2 people!

We try to invent ways to make a song more then just another song by another band, but we strive to make every one of our songs into small experiences so people remember. That also gives the show that we perform the chance to have an arc. Like a theatre piece. I think that's where our theatrical aspect comes in. I think Greencard Wedding more then a band is the fact that people are leaving the show feeling things are possible! 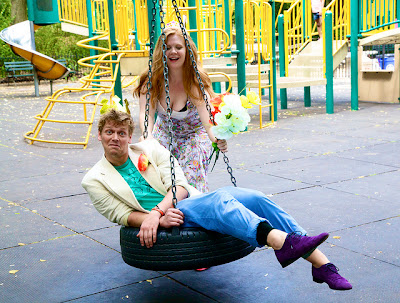 How did you guys meet?

MICHAEL: We met in a church.. hehe.. right around the time that I found God… Nope that’s not true… it was in a church though. She was performing a show where she had to sing in a choir.

JODY: I was singing in Alec Duffy/ Dave Malloy’s Murder in the Cathedral, in a Cathedral in Crown Heights, and Michael came to see it.

MICHAEL: It was beautiful. I didn’t understand the show much because I just arrived in the U.S. and my English wasn’t really spectacular.

JODY: We met after the show and he laid down some beats for me.

MICHAEL: And we went to have burgers with a group of friends at a place called Dutch Boy Burger which I thought was very funny. And after that a weird loft party (at least weird for a dude from the country side of Holland, little did I know heheh.) Where we started talking about theatre and plans and visions...

JODY: We stayed out till 4am dancing. Yeah, we ended up at that epic loft party with fires in trash cans! It was really Bacchanalian. Some poor kid split his head open head-banging next to a speaker and sprayed blood, like everywhere...I think we went home after that.

MICHAEL: The next morning she called me to do a play/musical and the rest is history!

Are you in love?

MICHAEL: Hmmm…. Yes . . . with fried chicken.. but I’m on a diet now… so I guess that makes it a forbidden love!!!! Ooooooh how exciting!

JODY: People ask us that a lot. We write a lot of love songs and have a lot of fun together. To me, that’s the best type of feeling to give people, being loved. It’s exciting. I’m interested in making things that leave the audience with a feeling good, that anything is possible. So I always hope we can create something with high enough stakes that it makes people wonder that.

What are your backgrounds?

JODY: I grew up in Nebraska around classic country and folk music. I played the cello for 4 years and the string bass for two. I’ve been singing in choirs and musicals and just on people's front porches since I was little.

MICHAEL: I’m from a small town called Sneek in the North of Holland. I have never been into musical instruments- really more into sports and beatboxing; we used to battle on the skate course. There were a lot of beatboxers in the town I was from, even the Dutch championship was held there. I did a big gig with an 80 piece orchestra and beatboxed on their CD. Beatboxing also got me through the auditions of the local theatre school in my town. When I was 19 I moved to Amsterdam to study acting, then to Den Bosch to study comedy, then to New York City to study Acting and Dance. And most important of all WORK! Now I’m back in Amsterdam again. BOOM!

Who is more of the troublemaker?

JODY: I think we both love mischief and taking big risks. That’s probably why we work well together. It’s fun to put something unexpected and honest up. To say something in the moment that might not always be rehearsed but is true. I get bored with things that are predictable. Mischief is where the magic happens!

MICHAEL: I mean, I like to think that I am. Because that means you can be nicely irresponsible. But if I make a promise I’ll keep it…I mean hey, your laundry might turn out all pink or green but at least I’ve done the laundry right!!!

JODY: Just to clarify, Michael has never done my laundry. I had no idea he did his own . . .

How do you collaborate?

JODY: Right now we work over Skype, Whatsapp, Facetime and email. We rehearse at 6am NYC time or 12 midnight due to our day jobs. We kick around ideas, we transcribe our calls. We can’t really play music over Skype unless we just play from memory and stand really far away from our computers. Skype has this problem with two people talking at once; the sound cuts out.

When we are together we improvise music. Sometimes Michael writes music and then we improvise words and harmonies or I write lyrics and melody and we improvise chords.

What's going on in May?

MICHAEL: We play some amazing gigs at Dixon Place, Ella Lounge, Bar Matchless, and more. AND we workshop our new play, THE SKYPE SHOW that’s going to be done over Skype!!!!! Shit's so exciting! Can’t wait to be back in NYC!!

JODY: We have a 60 minute theater piece with video, music and Skyping onstage, THE SKYPE SHOW, that’s going to be workshopped with director Pirronne Yousefzadeh and producer Aaron Simms. It’s the story of  us sitting down on Skype to make a show that will help Michael get his artist visa and discovering that we can’t make music over Skype, so we have to find a way to make a show we can perform. There’s a rock guru role for the amazing David Anzuelo in it that’s shot on video- “UNKA DAVE’S: Guitar for absolute fucking beginners." (I don’t really play an instrument anymore and so Michael got me a “learn to play guitar” DVD series when he left so it’s based, in part, on that).  It includes David’s awesome music.

We just built this sexy new website that speaks Dutch and English to tell people more about upcoming gigs and there are cake recipes, music and pictures: www.greencardwedding.com

What is your vision for the next year?

MICHAEL: We envision touring with the shows we make. We want to expand are audience and reach out to different countries. Love is a Universal thing right; we want the audience to leave feeling like love is possible- boundaries included. It would be awesome to tour in one of those old Volkswagen vans and just play venues and festivals along the road. We started building this in New York, and then throw it upon the World- sort of like that.

JODY: Yeah! Like that! I really hope that a venue in America or abroad will give us a shot to put up the show. We’ve sent out a load of applications. It costs next to nothing to mount. It would help us make a case to continue working together and to build our next two shows in this trilogy. I’d also like to go to Amsterdam. We were just offered a gig there in a coffee shop and our music has been played in a bar that was streaming us from Spotify. Also, I’m learning Dutch! Michael has only taught me naughty Dutch words so I have to expand my education.

MICHAEL: Yeah! This is our brand new website: www.greencardwedding.com you can buy tickets to our shows and come enjoy us in person!!

JODY: Also there’s some fun footage on our indiegogo page that’s been shot by the audience.