"...we put an image out there of how we want to be perceived, but how close is that persona to who we really are?"

How did you come to  playwriting? 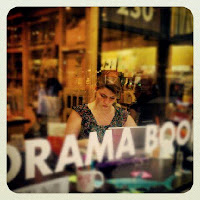 I was an acting major at my University and I had a terrific teacher that encouraged me to take a playwriting class. He said it would make me a well-rounded actor. Our first assignment was to construct a ten-minute play. I wrote a short piece called "Life, Love and a 7-11" and it went on to win an award at the Kennedy Center that year. From the first assignment on- I've been hooked. Acting is wonderful, immediate. Writing, for me, has turned out to be so much more rewarding and satisfying.

What was the inspiration for Rise and Fall of a Teenage Cyber Queen?

I read this article in Rolling Stone:

The article revolves around a "scene queen" named Kiki Kannibal. At 14, she created short videos that went viral. I started wondering what that would do to a family unit- to have fast fame centering around a young girl. A girl that is just coming to understand her own sexuality. It also got me thinking about these personas that we put out into the world. Meaning- we put an image out there of how we want to be perceived, but how close is that persona to who we really are?

What has the development been?

Development has been a long and quite enjoyable road. I had two amazing sources to help me along the

way. I had Padraic's Play Development group- a group of smart, astute writers that give great and supportive feedback to help guide me. And my company, The LabRats, has been there every step of the way. I was able to bring this piece up for our retreat at NACL and then workshop it until it was a part of our yearly reading series, RAW. The play has had many different openings/endings but I'm so very pleased that we have landed with this script.

What do you like about working with director Padraic Lillis?

Everything. Seriously. Dude is crazy smart. He has been a guiding hand through the development of the play- he knows it as well as I do, probably better. He's like a laser in the rehearsal room- so specific with his notes. But what I really love is that it still feels like a collaboration. The process was so fun to watch and- over the weeks of rehearsals- it helped me see the little things that needed tweaking. Once you see a great director shake down a scene to need and action, and there is still a line sticking out? Well, that's a line problem!

The new play that I'm writing cuts pretty close to home. It revolves around a couple trying to have a baby- a situation my hubby and myself are in right now. I had no idea that trying to conceive would take...trying. So, fertility is fascinating to me at this very moment.

You can see the Rise and Fall of a Teenage Cyber Queen at the Access Theater (380 Broadway at White Street) now thru March 17th. Purchase tix here or call 800-838-3006. Rise and Fall is produced by LabRats Theater company. Tickets are $18 but you can get them for $15 bucks by entering or mentioning SceneQueen! Do it.


Read more about LabRats Theater Company Presents 'Rise and Fall of a Teenage Cyberqueen,' Opening 2/28 by broadwayworld.com
Posted by Unknown