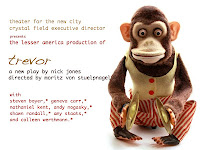 "A new play about fame, success, and the lies we tell ourselves in order to keep people from taking away our erratic, 200-pound chimpanzee."

What is Trevor about?

Trevor follows a 200-pound chimpanzee, played by OBIE-winner Steve Boyer (Hand to God), as he plots his showbiz comeback. You may know that once chimps reach sexual maturity, they are usually retired because, well... for all kinds of reasons... their behavior is unpredictable, they can be aggressive, and also their genitals become engorged, which isn't... you know, as cute.

Factoring into Trevor's journey are his muse and love interest, Morgan Fairchild (played by Geneva Carr), his caretaker and manager (Colleen Werthmann), his idol and fellow chimp (Nathaniel Kent), and a slew of neighbors, cops and animal control officers who wonder if maybe things are getting out of hand (Amy Staats, Andy Nogasky, and Shawn Randall). In that struggle to achieve the American Dream, even in the twilight of a career, the play is a lot like Death of a Salesman. So if you're imagining a tragedy about a chimp being absurd, funny, and weirdly moving, then you've got the essence of this play right there. Trevor is about the lies we tell ourselves to keep our worldview alive with hope.

How did you get involved in Trevor? Have you worked with playwright Nick Jones before?

Nick and I have been collaborating on another of his plays, Important Hats of the 20th Century, which is about the 1930s fashion industry told wryly through the lens of an Ayn Rand novel. And I guess while we're still shopping for a home for that one, he thought this might be another project we could join forces on. I had directed some shorts for Lesser America a couple years ago, just before they took on that name, and I love those folks, so we've also been looking for a way to collaborate as well. But also, my theater company, Studio 42, produced a play that Nick wrote with Rachel Shukert called The Sporting Life, an irreverent murder mystery centered around a turn of the century brothel (as well as a critique of capitalist morality). So I guess we've crossed paths in lots of ways! I love Nick's writing because he knows how to make comedy bitingly satiric, yet wildly entertaining.

Can you talk about working/collaborating with the Lesser Americans?

There's a lot of similarity between Lesser America and Studio 42, where I serve as Artistic Director. The former works to expose those hidden sides of our culture, and my company produces "unproducible" plays that might not otherwise see the light of day. We both believe in gritty comedy, and trust that our audiences are hungry to be surprised and inspired by bold theatricality. So aesthetically, there's lots of harmony. But on a personal level, I just think they're awesome people. Devoted and supportive of the power of new voices. And they have a sense of humor, which is just really important when cobbling a play together downtown.

How do you approach a new play?

I try to take the essence of my experience in first reading the play as the central pillar of the production. It's that experience that I try to build on and work toward flushing out. If that's not in line with the playwright's vision, or I simply don't connect to that thrust of the play, then I have a really hard time directing it. When I ask questions of the playwright, it's always to clarify how I can tell the story of the main thrust. And in rehearsal, I do my best to connect to whatever impulses the playwright seems to have had and discover the play from the inside out, you know, before I try to reshape the play in my own image. That self-involved way is deadly, I find.

How do you like to collaborate with a playwright? What's your ideal situation?

Ideally, like in any relationship, honesty has to be central. I have to be able to be honest with the writer, they have to honestly critique what I'm doing, and we each of us have to be honest with ourselves. What's amazing about Nick, and also Mike Lew who I just worked with at the Alliance, is the level of honest self-criticism. He's proactive about working with what he's seeing, and not only about hoping it'll magically be as effective as the thing he concocted in his mind's eye. Because these things always evolve, you know? It's important that we search deeply for the heart of the play, and avoid being self-congratulatory before there's cause.


How did you get involved in theater and as a director specifically?

Well, I started studying graphic design because that's what I always thought I wanted to do. And then I missed theater like crazy, and it felt like, I guess I don't have a choice really. I don't mean to be all religious about it, but I do genuinely feel the most alive in rehearsals. But those tools of design definitely help in my directing work. Investigating the value of what might otherwise be taken as fixed circumstances, carefully arranging the parts to create a whole, and thinking about end user experience. All those design theories that can shape how an audience participates with a theatrical event.

Sweet or savory? and what specifically?

I'm always drawn to comedies that have a really dark heart. Work in which the laughs come from the very pain of continuing to hope and dream. That's when I think we learn the most about ourselves, in surviving ourselves. Trevor is about the desperation of maintaining the facade that we belong. But also, there's a monkey in it. And when else am I going to have the chance to investigate the tortured soul of a chimp who dreams of celebrity and acclaim?


What is inspiring you right now?

So much. What's not is the easier question? The increased interest in young up-and-coming playwrights that our industry seems to be valuing. The explosion of new media and Web 2.0 interactivity. The willingness of theater artists to cross boundaries in our networks to collaborate. A spirit of adventure that I'm sensing in audiences these days, when they look for an experience or an event as much as a theatrical narrative. I just feel very positive about all that's happening at the moment.

In the fall, I'm directing Mike Lew's Bike America at MaYi Theatre, which we just did at the Alliance Theatre. It's about a girl looking to find herself, and the whole thing takes place on bikes, which is super fun to stage. But before then, I'm doing a new play with graduate playwright Alex Gherardi at Rutgers Mason Gross, and an as yet unannounced Shakespeare at Allentown Shakespeare in the Park. Also, my theater company, Studio 42, has an evening of short "unproducible" short plays pitted against one another in our second annual "Unproducible Smackdown." Definitely check that out!