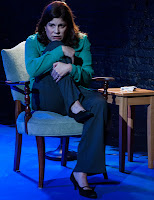 " You might not realize that it’s kind of subversive..."
-Playwright Susan Bernfield


In your program notes, you talk about your experience having a baby ten years ago felt frustrating because of people's assumptions on parenting (and perhaps particularly in the theater industry). It sounds like you feel those assumptions have changed.  Is that true and can you expand on that?

I think I maybe feel like those assumptions have changed just based on casual observation, but I may be very sensitive or wrong… or guilty of making new assumptions!  Because people still seem to relate to the play, fortunately!  It felt lonely and unusual then, to be a parent, and some of those assumptions I think came from my being kind of a strange and curious animal among the people I knew.  I’d “out” myself as a parent, and suddenly it was like I was from Mars, I needed to be treated more sensitively or something.

There are simply more examples now, and those examples are more out there, in social media and stuff, and they’re just, well, cooler, I mean, obviously people had kids before, but maybe it was less of a “thing”?  Definitely a different culture of parenting, and again, in my perhaps biased or ridiculous observation, it comes from the aggregate, from everybody doing it in every neighborhood, not just the traditional NYC bastions of stroller-pushing, and that everybody has made it fashionable, and the media and marketers have latched onto that, making it even MORE fashionable, there sure was no cool baby gear back in the day! 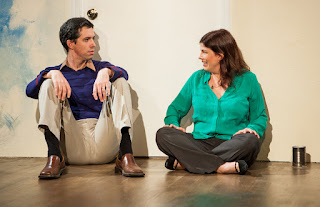 Not that it isn’t still difficult, not that people don’t still feel conflicted… and I think there’s a whole different kind of pressure, actually, that comes from all that attention, all that awareness of other people’s babies, that’s probably makes it more difficult now in many ways.  Also, maybe I was just always a little older or more settled down than my colleagues?

But a lot of my issues with being called a “mom” and conforming to other people’s ideas of what a “mom” is and not wanting to renounce professional or even just human aspects of my identity – or if not renounce, then just not have this additional identity supersede the others – are very much more about my upbringing, with a re-entry mom for whom going to work was a really big deal, and her working identity was something she fought for, whereas being a parent was just… a natural part of life, no big.  So who knows, starting out today I might not have the same issues.  But then again… I might. 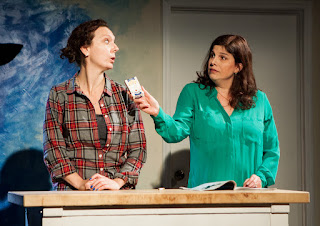 Rae has some very un-Parenting Magazine/popular culture reactions to becoming a mom, how has her character been received both ten years ago as the play was being developed and today?

I remember in a rehearsal of a workshop of it long ago, the actor who played Gil said about one of the lines, “oh, but she doesn’t really mean that,” and I was like, yes she does!  And the experience this time has been pretty much the same, at least talking it through in rehearsal, the realization of what she’s really saying kind of creeps up on you.

I think the play’s had a hard road because at first glance people are dismissive of a “baby play”  (I am too, I never intended to write one), if you’re not in the middle of it you might not realize that it’s kind of subversive.  It’s so so nice now when people say “wow, nobody ever talks about this” and you know they’ve had similar experiences. 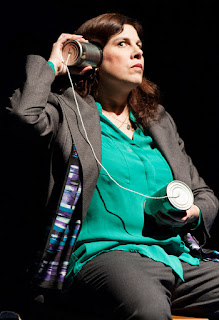 How did you, and do you in general, like to collaborate with your director (in this case Pirronne Yousefzadeh)?

I love working with collaborators, and Pirronne was awesome.  It’s so nice to get to rehearsal and you have a partner and advocate in the director, that we get to have a similar experience from different angles.  I have tremendous respect for directors, because I couldn’t do that job, I express things so poorly when they pertain to my plays, and a director translates me in such a smarter, more succinct, MUCH more productive way.  Mainly with directors I try not to put my foot in my mouth in front of everybody else!  Which doesn’t always work out…. I tend to say too much, or the wrong thing.  Terrible.

How did you become involved with Chrysalis?

My friend Sonya Sobieski saw Chrysalis’ call for submissions, which was looking for a very specific kind of play, and she thought of this one.  So I sent it.  And Adina picked it!  Which is awesome.

There's a line that Rae says - something about the "barking girl" flaunting her freedom - which really stuck out  in a powerful way and then was sort of circled back on when Rae receives the news on the phone... what was the inspiration for that particular story and what were your thoughts on weaving it throughout?

Y’know, I really did see a girl like that in a small, beautiful museum on the Riviera.  I already had a kid, and the circumstances of my visit were different, and I think I didn’t know why I was writing about it when I first wrote about it…  but clearly I felt that she was able to release in a way that made me very uncomfortable, that scared me, that rubbed against my in-controlness.

The first scene of BARKING GIRL was originally a 10-minute play which was performed a few times, and I didn’t write the rest until 2 or 3 years later.  I love it, though, when you write something, and then you discover how it’s really gonna resonate later on, often WAY later on.  You come up with these things, and they’re just sitting there in the play, and something else emerges and suddenly you know 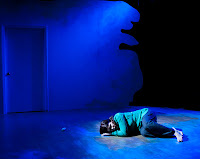 why you came up with them in the first place, and there’s an arc in more than one way.  I’m glad they resonated for you.

How do you write? Writing schedule? Idiosyncrasies/routine? Has it changed in the last ten years?

I get so busy I sadly never have a schedule!  Although I’ve been trying to be better about that lately.  I think I’ve come to terms with the fact that my writing life is cyclical, there are going to be times when I have the time or mind-space to write, and times when I don’t, but during those times I have to trust that it will come back someday.  And then when it doesn’t, ha, I have to at least find some time and make myself work a little more!

I think it’s harder now, I’m older, and things don’t just spew out like they used to – like this play did, finally, nearly fully formed after 2 years of false starts (I was in an airport rental car lot when I suddenly saw the second scene and had to sit on my suitcase and pull out my notebook so I wouldn’t lose it).  But these days, if I somehow finally find myself on a roll, I appreciate it more.

How did you come to theater?

I started being in plays at the children’s theater in my town when I was 9.

How do you juggle producing and playwriting?

Oh, I don’t!  See “cyclical,” above.  But seriously, though I try to balance, the producing (and administrating, really) stuff is more deadline- or real world-heavy and it tends to win.  For the past year I’ve been trying to take a “creative day” once a week, and that’s been productive, or even when it’s not at least it reminds me that I AM creative, gives me focus.

Barking Girl, with Adina Taubman, Max Arnaud, Meg MacCary and Tom O’Keefe is produced by Chrysalis Theatre Company and runs through December 2nd at the 4th Street Theatre. You can get your tix here and enter NGFriends to get your Theaterspeak discount.