RADIANCE Playwright Cusi Cram on Bar Plays, Craft and How to Stay (writing)

"It's been a little like playing the accordion with this play, there is a constant expanding and contracting..."
-playwright Cusi Cram

(Interview brought to you by Russian Transport playwright ERIKA SHEFFER. )


SHEFFER:  Theaterspeak (a.k.a. Micheline Auger) and I had the distinct pleasure of catching Cusi Cram's RADIANCE, produced by the Labyrinth and currently running at The Bank Street Theater.  Cusi is a brilliant playwright, who I've been playing six degrees with for some time, so I'm very pleased to get the chance to pick her brain.  (Some of these questions are lifted from a Daniel Talbott interview because he is awesome at asking interesting questions).

Is there a subject or character that you would be nervous writing about?  If so, why?

Before writing this play, I was terrified of writing a play set in a bar. Seems like O'Neill and lots of fine Irish playwrights really cornered the market in that arena. I seem to have conquered that fear. I realized in spite of my apprehension, I do have some expertise in the field. In addition, a court room drama seems daunting to me, as does something set in a prison. A play about cannibalism or cannibals would be really hard for me too, as I don't even like saying the word. Also, anything where children or animals are hurt. I am a huge fan of both.

Do you have a regular writing routine?  What is it?

Well at the moment, it involves a dream of getting up very early and trying to get to my desk as soon as possible. This has gone to hell in a hand basket during production but I am trying to get back to it. I build up a lot of resistance to writing as the day progresses. I think tiredness helps in silencing the vociferous committee of  critics in my head. All this is to say, my routine is always changing but the more I read about writers who are in it for the long haul they seem to have rules about writing and a lot of them get up early and write first thing. Some of the dearly departed ones were drinking by 11, maybe that's why they wrote such fine bar plays? Napping is also a part of my regular writing routine. That is a constant. 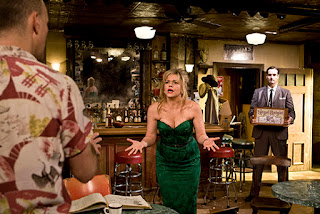 RADIANCE grew out of the Cino Nights series at Rising Phoenix Rep. How did you go about expanding the piece?  Are their new scenes, drastic changes?  If you feel comfortable, can we look behind the curtain?

When we did the Cino Nights  version in June the play was just under fifty pages. Now it's about 84 pages. There is a flashback that is totally new. And I also pulled out some more things in the pages that I originally wrote. It's been a little like playing the accordian with this play, there is a constant expanding and contracting. It has a unique structure that has required a lot of fine tuning. It's also the only play that I have written that has gone from page to stage in six months. I've been learning the play and it's particular rules as we go.

What do you love most about seeing your work produced?  What is the hardest part of the process? 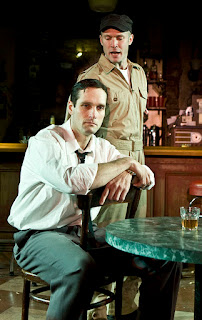 I love rehearsal. Process is thrilling, inspiring and wildly exciting to me, pushing things toward production is less thrilling. Though I do love watching all the design elements fall into place. I am always moved at how hard all these different kinds of artists work to make something that first existed in my addled brain to life. If we could do the play for free for kind, smart folks and not worry about money, reviews or marketing---then I would be in total bliss. I would also be living in an alternative universe or France.

Do you have any plays that are strictly for the drawer (or hard drive)?  Something that along the way, you put aside, for whatever reason.  What's it about?

I don't have any plays that I have finished that have not had some other life, some of those lives have been pretty short and not terribly glorious. I have many, many, many unfinished plays. One was called Virginia Wolves. It was about a very sheltered woman who moves to New York from an island in South Carolina and falls in love with her gay Ecuadorean neighbor who has an exotic collection of cashmere socks.

What do you do when you're working on something, but you are just not feelin' it?  How do you inspire yourself?

I write out of order.
I write the scene I am most excited to write.
I write about why I think what I am writing sucks.
I write in another form. I like the personal essay as a form of escape.
I force myself out of the house, even though I am often very resistant.
I take a non-athletic walk with no particular destination, this usually involves pit stops for espresso and thrifting.
I sometimes go to museums. More often, I go through the New Yorker and circle all the things I want to see when I finish what I am writing.
I read poetry. I never tire of Mary Oliver.
I read the Paris Review interviews of writers I admire. This one is full of gems for the playwright
I complain to my sister.
I talk to my husband about what I would like eat (I am an expert food producer) sometimes my husband listens.
I think about exercising.
I meet my sister and brother in law for lunch at Elephant and Castle for more complaining
I sit at my desk and breathe.
If the sitting and breathing at my desk is a bust, I read this quote. It often works, making the above list an in depth study in procrastination.

"Learning to stay with ourselves in meditation is like training a dog. If we train a dog by beating it, we’ll end up with an obedient but very inflexible and rather terrified dog. The dog may obey when we say "Stay!" "Come!" "Roll over!" and "Sit up!" but he will also be neurotic and confused. By contrast, training with kindness results in someone who is flexible and confident, who doesn’t become upset when situations are unpredictable and insecure. So whenever we wander off, we gently encourage ourselves to "stay" and settle down. Are we experiencing restlessness? Stay! Discursive mind? Stay! Are fear and loathing out of control? Stay! Aching knees and throbbing back? Stay! What’s for lunch? Stay! What am I doing here? Stay! I can’t stand this another minute! Stay! That is how to cultivate steadfastness." 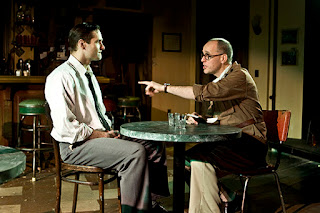 Who is your hero?

Right now, the Obamas are at the very top of my list. I am crushing on both of them in a huge and crazy way. Above all, they both make me want to be a better citizen. I want to believe that better citizens make better art. Here's hoping...

RADIANCE is produced by the LAByrinth Theater Company, directed by Suzanne Agins with Kelly AuCoin, Ana Reeder, Kohl Sudduth and Aaron Roman Weiner. It runs at the Bank Street Theater and has been extended thru December 8th. You can get your $20 discount tix here (discount code "Thanks") DO IT.