You Will Make A Difference - AliveWire's Immersive Theater

"...it reached back to something much more fundamental and basic – more powerful – in the human experience."
-Creator and director, Jeremy Goren on You Will Make A Difference

Perched on a corner of the Starbucks and Gap-riddled streets of the Upper West Side, AliveWire has poked into the forgotten rooms of the West Park Presbyterian Church to present You Will Make a Difference. The building, so easy to pass on a morning commute without a thought, is in actuality a labyrinth of strangely mismatched rooms and levels, creating the stage for a unique theatrical experience.

I won’t give away the surprises, but do go in with open mind and a willingness to immerse yourself in the experience. It left me with much to reflect on, so I posed a few questions to some of the key players in the creation of You Will Make a Difference: Creator/Director Jeremy Goren, Co-fonder/Producer Chana Porter, and Director of Development/Producer Eric Borlaug.

-Alex Rubin
You Will Make a Difference reconstructs the ritual of Theatre. Instead of sitting in a seat in a single space, we are moved through many rooms. What came first, the concept or the discovery of this space?

Chana Porter: The concept, definitely. It our early, pre-residency talks Jeremy was very clear on the movement of the piece and the audience as passing through different rites of passage, until the line between audience and actor becomes totally blurred. We just really lucked out with finding this gorgeous old church and being made so welcome there.

Jeremy Goren: You’re right to refer to reconstruction – rather than, say, innovation. First, though, let me mention that we’ve only scratched the surface of this, and there are many more serious people who know much more about “the ritual of Theatre” than I. In fact, it would be presumptuous for me to use the word “ritual” here at all, so I won’t. It’s not actually part of the intention. For me, this is merely art. I never took a theatre class. Everything I know came from other sources, reading, instinct, and my mentor, director/master teacher Polina Klimovitskaya.

On to your question: The dynamic of moving through rooms was, initially, an intuitive discovery for me while the concept of the piece was in the early stages of gestation. I took myself to task for it – famous projects utilizing this concept already existed after all. Was I sure that this was not just a theatre gimmick? I knew instinctively it wasn’t but had yet to understand why. Then, I found a dirty paperback in the $1 bin at a used-book store. This book – a seminal anthropological work from 1908 that I’d never heard of – made clear the ancient connections between my initial thematics – life transitions (particularly adolescence) – and the passage through distinct physical spaces. I felt comfortable to go ahead, knowing the concept was founded in something real and wasn’t just some smart idea I’d made up.

Months later, I visited West-Park Presbyterian and knew it was the place – not a theatrical void, but a grand, lived space that housed a remarkable and varied history and whose current residents were engaged in the same struggle as we, in a way. Then, while researching medieval miracle pageants in another old book, I read backwards to the chapter on Catholic liturgical drama and discovered that even 1000 years ago some Catholic clergy – to whom we hardly look for innovation or creativity these days – were staging progressive performances throughout their churches. I became ecstatic, much to the confusion of some around me who tried to reassure me that what we were doing was indeed innovative or special. It’s not – and that’s why it’s exciting. I was thrilled to discover that what we were attempting was not new or innovative or avant garde in the least (what is?) – but that it reached back to something much more fundamental and basic – more powerful – in the human experience.

Another reinvention of the rituals of Theatre is that instead of applauding and leaving with no interaction between audience and artist, the performance rolls right into a community activity. Why do you feel this is an important component of the experience of You Will Make a Difference?
Eric Borlaug:  The ending (which is my favorite experience of the piece) allows the audience to digest their experience in a truly non-theatrical way, but rather a personal one.  The “Living Installation” portion, where performers are stationed around the room telling personal stories to strangers, in which participants can move between performers, often mid-sentence, is such a unique and intimate closing.  Instead of applauding performers you get the opportunity to share in their lives as individuals, break bread with them, and on some nights join them for a ho down.  Did I mention that they tell different personal stories every night? 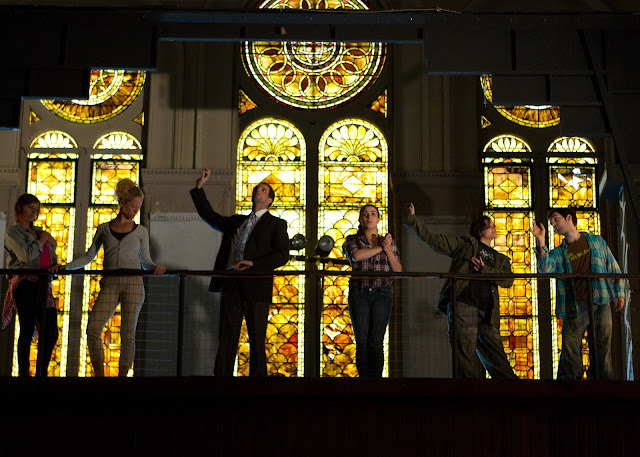 CP: Personally I never want people to feel experimented on in experimental theatre. You want to extend an invitation, to follow the white rabbit. I love the kind of village social vibe we strike at the end of the piece, because you’re not forced to talk about what you’ve just seen. You can talk about Doctor Who if you want. But then the experience keeps bubbling up into conversation. I think that’s the piece’s greatest success.

How do you go about organizing a theatrical experience like this?

EB: The key is collaboration.  We’ve had so, so many talented artists working on this project tirelessly over the last six months and we were lucky to have a network of other artists and supporters who came to our fundraisers and contributed to our campaigns.  Also, it didn’t hurt to have a director as passionate about, and dedicated to, this piece as Jeremy Goren.

What does it take to get an audience to follow you into an unknown space? What tactics do you use? What have you seen succeed and fail?

JG: These are huge questions. They’re perhaps the main questions I ask every day and each night during performance. I don’t have the answer. I can say that the indirect path can be the most direct. Then again, sometimes people want a strong hand and an outstretched arm, and so one has to reach out to them. It changes each night and with each person. This is the large experiment in this “experimental” work and the excitement of human interaction.


How do you go about getting people to come to such an out of the norm theatrical experience?

EB: We trick them.  Ha!  I jest.  We have been doing our best to have as diverse an audience as possible.  Some of our dinner night tickets are price prohibitive to some people, and so we also invite high school students for a fraction of the price.  We’ve been trying to invite people from a variety of community groups, people of all ages, and people of all degrees of social views.  Our goal is to get them all there at the same time, too.

Is there a Dream Found Space you want to create work in?

JG: I have no idea. The White House? Petra? Bandelier? The Black Forest? You have to find the space for it to be “found”, right? I really like West Park Presbyterian – it’s a fascinating building with an open and interesting community. For instance, today, I listened to Reverend Brashear and Teddy, a steamfitter by trade and the church’s sexton, discuss the Gov’t Mule version of “John the Revelator”, which led to The Book of Revelation and then into Ingmar Bergman.

CP: Everything I’ve thought of and went, yes! I then scared myself thinking of rehearsing in. Like the big abandoned hospital near my house. I believe in ghosts and residual energies, and you have to take that into account. Dia Beacon, the factory turned modern art museum, definitely. I’d like to do a modern dance piece there, with text.

EB: I’ve always thought it’d be really neat to do a play on the side of a long trail, like the Appalachian Trail or the Pacific Crest Trail.  I can’t imagine going hiking for months a time without seeing a play.  Does it count as found if we’re not finding the space but rather the audience is finding us?

Scenario: the Earth is doomed, Armageddon style, and there is a rocket ship that can carry one artist of your choice. Who do you save?

EB: My initial response is Hart Crane, but it would probably be polite to return Lady Gaga to her people up there.

JG: I will assume that the rocket ship can move through space-time and bring back the dead, so: Sor Juana Inés de la Cruz.

CP: Thai filmmaker Apichatpong Weerasethakul. His movies are so expansive and intimate. But is this a trick question? Aren’t you torturing the artist, sending them into space to be alone forever? If so, I have a different answer (which I will tell you in person.)

AliveWire Theatrics’ World Premiere of You Will Make A Difference is a collaboratively devised performance conceived and directed by Jeremy Goren. Performances take place now through November 11th at the West Park Presbyterian Church (165 West 86 St.) in NYC. For more info and tix you can visit AliveWire.

Interview by Alex Rubin: New York based playwright and lyricist. She is a member of the BMI Musical Theatre Workshop, 2012 SPACE on Ryder resident, 2012 ESPA*drills finalist, and recipient of the Francis Ford Coppola Award for Excellence in Theatre. Alex's plays have been presented by Primary Stages, Theatre for the New City, The Tank, The 45th Street Theatre, Hofstra University, Temple University, Thunderclap Productions, and Peter Schneider Productions. For more information, please visit www.AlexandraHRubin.com.
Posted by Unknown