In the play, I describe myself as Evel KeNegro in platform wedges. Mania will make you feel super-human. I thought I was above death...
-Eboni Hogan
Performance Poet, Playwright and Teaching Artist
Eboni, how did you come to theater, writing and performance?

EH: I've always been a bit of a ham. I come from an artistic family and as a child, my love of acting and dancing was always supported. I also loved to write. My father gave me a book of Langston Hughes' poems when I was 10 or so and I would memorize his work and recite it to anyone who would listen.

I stuck with theater all through high school (I was president of the Thespian Honor Society at my school...Drama nerd-dom, for sure) and was later accepted into the Tisch School of the Arts at NYU to study at the Stella Adler Studio of Acting. While at NYU, I started toying with performance poetry, and writing became my sole focus for years.

And Nicole, how did you come to theater and directing?

NW: I've always loved theater and like many artists, I came to NYC straight out of college with the dream of becoming an actor. I had studied history in undergrad and interestingly enough, I accepted a "day job" as history teacher. I taught history for several years, directed the school musicals and then went back to acting and did a lot of teaching artist work.

Even though I had been directing my students, I did not consider myself a "director" because it was just so much fun. A few years ago, I was getting tired of acting in plays that were not satisfying and really wondered if I would continue to purse acting. At the same time, I didn't want to give up on theater. I thought to myself, I wonder if I can direct adults? So I made a big change, I gave up my UWS apartment that I could barely afford, moved back to my parents house, went to the LaMaMa Directing Symposium in Italy, and when I returned to NYC, I took on every project I could and started telling people I was a director. I guess people believed me.
What is Foreign Bodies about?

EH: Foreign Bodies is the true account of a six month trip I took to Ghana, West Africa in 2006 shortly after being diagnosed as bipolar. I was in a total manic state for most of the trip and, as a result, made plenty of questionable and dangerous decisions because I hadn't yet come to terms with my own mortality. In the play, I describe myself as Evel KeNegro in platform wedges. Mania will make you feel super-human. I thought I was above death. A number of events, including a major surgery while in Ghana, caused me to face the reality that I am breakable. And also, fixable. 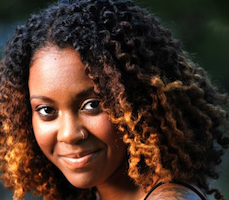 What was the inspiration?

EH: At first, the inspiration was simply Ghana. I came back home to New York and immediately began writing poems and monologues and short stories about the experience. I desperately missed Africa. It was a way to place myself back there.

Fast forward to 2010 (yeah, it took me 4 years to write this script), and I started to realize that the play isn't just about Africa, or falling in love for the first time or missing home. It isn't just about being a foreigner in a strange land but a foreigner in your own body. With the help of some outside editors, I recognized that I had the opportunity to tell the story behind the story and touch on issues of mental illness which is something that is not often discussed in the black community.

How do you write?

I prefer a good ole fashioned notebook and pen to a computer any day. Especially when I'm just beginning to work on something new. I'm less likely to end up on Twitter if I stay away from a computer. Much of this play was written in coffee shops everywhere from Brooklyn to Chicago. I like to people-watch while I write. New York is the perfect place for that. It balances out the madness in my head.

Nicole, how do you approach working with writers?

That depends a lot on the writer and where the individual writer is in her process. I think the question is always, "What is this story you want to tell? What is most important to you?" and from there, the goal is to help any writer see if what is on the page reflects the answer to those 2 questions. In the world of new plays, I think there can be this tendency to want to rush in and "fix" things. Sometimes the moments that people think "don't make sense" are often golden opportunities to bring something to life, and those are the moments that I find really excite directors and actors. 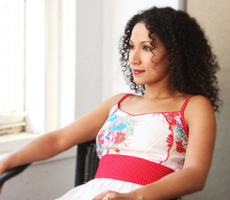 What is your approach to giving feedback?

NW: I wish I were better at it. In the sense that I think I am too nice sometimes. (Maybe you should ask one of the actors this question). I try to be as positive as I can. In rehearsal, there are so many choices that an artist can make. If I think something is not working and if I don't have something specific in mind, I will ask the performer to try something else "just to see what other road we might go down."

Again, I try to ask as many questions as possible so I can understand where a particular artist was coming from before I step up and change or refine things. In Foreign Bodies, there was a lot that we needed to discover as going from a solo show to an ensemble piece required a new understanding of an older text. We didn't want to change the text but we did need to look at what was happening on stage.

Ebony, how do you navigate feedback?

EH: I was so terrified to share this work for so long because it's so deeply personal and confessional to me. It's hard to hand someone a piece of your life and ask them to dissect it, chop it up and judge it. I try my hardest to always be open, though by nature I am the most stubborn person you will ever meet. But I'm also a perfectionist. I refuse to present wack-ass work to the public. So I had to learn to trust the opinions of others.

Nicole, how can playwrights help the director in their process?

Eboni, how can directors help playwrights in their process?

EH: There's a certain sensitivity to the work that a director has to have especially when working in the same room as the playwright. And even more so when the work is autobiographical. I'm not going to run out crying if something doesn't look how I imagined it, but I appreciate being consulted along the way. 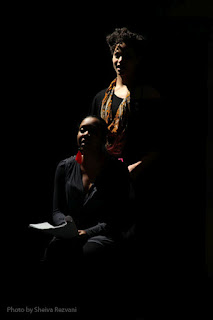 How did you meet Nicole and Poetic Theater Productions?

EH: Jeremy and Alex have been creating new work with all my favorite New York City poets for a while now, so it was inevitable that we would eventually join forces. Alex came to the first staged reading of Foreign Bodies and later Poetic Theater offered to produce it. They were the ones that introduced me to Nicole as a potential director. I work well with directors that are willing to play and Nicole is all about creating as we go along.

EH: I wrote, wrote, wrote and wrote for years. I looked at journal entries and emails I'd sent during that time. Since writing it was such a long process and memory is fallible, I found myself consistently having to re-immerse myself in these stories. I listened to hip-life music. I looked through photos and watched Youtube videos of the man I had met and fallen in love with in Ghana. I always had to find ways to return to that moment. That became especially important since I spent so much time running around Accra like a madwoman, chasing boys and chugging palm wine, that I had to collect the pieces of my memory and sort them out in this play.

NW: In terms of working with Eboni, turning this into an ensemble piece was really about looking at the journey she was taking in the play and finding ways in which the ensemble could create those images. I think the idea that really allowed us to break open the piece was when we decided to cast someone as the narrator's younger self. Being able to tell the story and go through the story at the same time. Given the poetic language and imagery in the play, it was exciting to me to find ways to create those images and move through the story in a way that honored the poetry but still kept the story alive and moving.
Who/What inspires you?

EH: I'm pregnant with my first child so preparing for him has been my primary focus. I've written so much about this little person I haven't even met. It is fascinating and inspiring to witness what the human body is capable of. Yesterday, I put my hand on my stomach and for a brief moment I could feel his pulse through my skin. I could feel my own heart beating and then his smaller, quicker one. If that ain't poetry; if that ain't a reason to adore this life and dance in the streets and write love songs, I swear I don't know what is.

NW: I am directing a show at the 52nd Street Project. I have a 10 year old playwright who wrote a play about a monkey who wants to be a chameleon. I am also a co-producer/curator for the Working Theater Directors Salon. In May, I am directing Veil'd by Monet Hurst-Mendoza with Rising Circle, then, in June the Women's Project Lab is putting up our production of We Play For the Gods.

EH: Foreign Bodies on Broadway. Then an international tour. You hear that, Universe?

FOREIGN BODIES is part of Culture Project's Women Center Stage Festival. You can catch it Tuesday and Wednesday, April 3rd and 4th at The Living Theater, 21 Clinton Street between E. Houston and Stanton Street. Tickets are $18. You can purchase tickets online or call 866-811-4111.