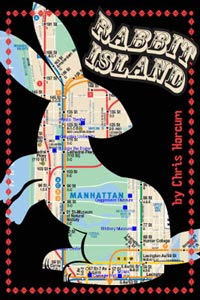 "Happiness doesn't like it when you think about it. It runs away..."
- Chris Harcum's Rabbit Island

What was the inspiration for Rabbit Island?

The play is about the moment of becoming a real New Yorker and what it takes to get there. A clown friend asked after one performance if it's based on actual experiences from my life. I told him, "Nah. The real stories are much worse."

The way I write is by letting ideas simmer for a long time until I sit down and let it flow. I walk around with some ideas for several years. I feel slightly possessed when I write. It's like there's a big funnel floating around the clouds with an umbilical chord to my brain and nervous system.

I pushed out the first version of Rabbit Island back in '09 and immediately had a reading of it. Now that I've had a little more distance, I can say that it's clearly a metaphor for the first five years I spent in the city. For the first three, I kept expecting some men in suits to come up and tell me I wasn't allowed to stay here. Everything is a little off in my memory of that time, even though that period ended only five years ago. It's like if you turned up the red and sharpness on the picture of your TV. It's hard to watch but kind of cool at the same time.

I tried to capture the feeling of being in the center of things but totally out of place, feeling threatened but knowing it's also hilarious, how everyone wants something much bigger and how you can only feel this in New York City.

What is your background as a theater artist?

I was into Shakespeare, Saturday Night Live and Monty Python when I was in high school. I also took dance and played guitar in a rock band. I don't write in verse but there's definitely music to it. If things are off, it's hard for actors to get back to the words. There's a precision and a set up to things later on. When a drummer loses a stick, the beat must somehow be maintained until another stick is grabbed.

I try to write what will come out of the mouth easily but also strike the moment immediately so the audience isn't trying to catch up. If moments are kept up in a rhythm like this, you can smack the audience upside the head with a surprise. When someone says, "I knew something like that was going to happen, I just didn't know how," I know I've failed. 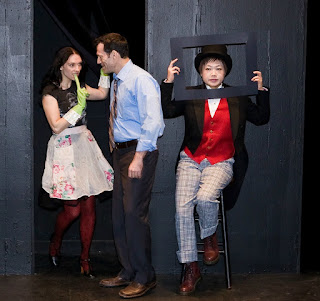 I want things to be accessible and cause an audible reaction in the audience. It's how I know there is genuine listening and thinking on the part of those in attendance. It also fuels the actors to Bring It. I've put in ten years a solo performer in addition to doing more traditional acting and playwriting so I have a good idea when something flows and when it's not fully baked. I try to express the thoughts under the thoughts under the thoughts and have the characters say those things. When actors pick it up the first few times, they immediately want to tame what's being said. It's human nature. We are made to be polite so we want to behave in ways that are safe and realistic or get the easy laugh or make us look good. Once that passes, the fun can be had.

How did you meet Aimee Todoroff (the director)?

It's a true story of fate, Stephen Sondheim, Michael Birch, Alec Baldwin, cigarettes, ArtEffects, Foley's Bar, Ringling Bros. elephants, Blackberry and Facebook. When people would ask what I was working on during our first few months of dating I'd wave a hand around Aimee and say, "this!"

She took a site-specific directing class with the mighty Daniel Talbott and needed to do a scene from As You Like It in the West Village. When she didn't quite find what she was looking for in an actress to play Rosalind, I wound up playing that role. And the company Elephant Run District was born. 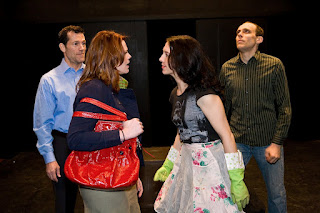 Aimee, how did you come to directing?

I started out as an actress, and still do perform when the opportunity arises. But early on, a teacher recognized that I tended to pay more attention to the over-arching concepts of the play than to my own particular part. Jokingly, he said "it's a wonderful quality, but maybe not the most useful for an actor. You should think about directing." From then on, I still studied acting but would grab chances to direct whenever I could. Other mentors would encourage me along the way, and eventually, I realized that as much as I loved performing, I was happier and more satisfied as an artist by working towards fulfilling the promise of the whole production. I can contribute most through directing.

Chris and I are partners in life as well as in art, which can bring it's own joys and challenges- mostly joys! With us, we need to set very clear limits about when we are focused on work vs. when we are focused on the rest of our life. From there, it's just a matter of respecting each other as artists. I listen to Chris as I would any other collaborator. It gets tricky when people ask "Who's idea was that?" Most of the time, it's both of us.

And speaking of collaborators, this project has been a huge source of pride for me. The radiant Carrie Heitman has a background in devised work, Joel Nagle has the detailed approach of a film actor, Ethan Angelica brings the energy of his musical theatre experience, Mel House, who trains at Esper, explores every avenue of preparation to find her character, and Mariko Iwasa is a newly transplanted clown from Japan!

The cast of Rabbit Island are all vastly different performers, but all approached the process with ideas, openness and an absolute commitment to finding the best, truest course regardless of where it came from. Each rehearsal was an ego-free zone and it was wonderful to be able to walk into a room full of artists, throw out my notes, and see what we could create together. 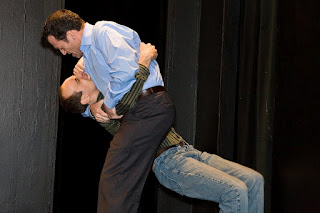 Great. I was able to be the playwright on this project and watch everyone else go through the torture I normally put myself through as a performer. This was Elephant Run District's third big project. So we were able to amass a good stable of people on stage as well as our great designers and stage manager. We hope to build on this.

The main thing was getting this piece down from 95 minutes to under 60. I chopped the heck out of this. The first run was 81 minutes. Everyone rallied to get it under time. More than that, they all worked to give the piece the deep dramatic feel needed to sell the comedy. The people in this play feel like people and not just mouthpieces for me. Part of that was from my NOT telling the actors real answers to their questions. They found the heart beat with Aimee who fused many styles of our actors and kept the play alive.

Aimee, How did your company Elephant Run District come about?

Chris and I had both been working separately, creating our own work, for years when we met on that fated night in the Elephant Run District. I like to say we walked backwards into our own company, but to be honest it's what we both were moving towards. Opportunities kept coming up- a supporter would offer his theater for a few weeks, a good friend wanted to collaborate, etc. and so we found a way to make art for those spaces.

Since we were doing the work of producers anyway, we decided to make it official by forming Elephant Run District. This has been a great move for us, allowing us to break away from the model of waiting for opportunities to come to us and to take a more thoughtful, purpose driven approach to our work. Rabbit Island has been a big step in that direction, and we couldn't be more proud! 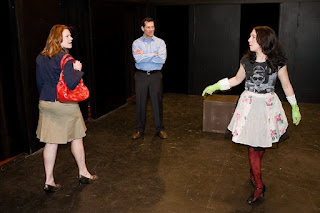 What is your mission?

Elephant Run District is a collective devoted to challenging expectations, inspiring dialogue in our community and creating long-lasting memories. Elephant Run seeks to entertain its audience at the same time it addresses social justice issues. The District is a place where traditions collide and new possibilities are explored in the hunt to create stories that are ultimately human.
What do you both have coming up next?

Aimee will be directing the work of young writers in the Writopia Worldwide Plays Festival- a festival of plays, musicals and monologues written by the next generation of playwrights.

We're also doing evenings of work for and by women. The first question some people have asked is, "like Vagina Monologues?" My short answer is, "No, jerk face." There are more women in this field than men. They need more opportunities. I like writing for women and have a rare knack for it, as a guy. We also have six or so other projects up for decision.

What is inspiring you lately?

CHRIS: I like what's happening with the BFG Collective, New Group, Barrow Street, Parallel Exit, Transport Group, and Rattlestick. Van Halen's latest tour. Working at the Times. But my biggest inspiration is from getting older.

AIMEE: The Frigid Festival! In less than 2 weeks, I will have been able to see more than 20 works by passionate artists from around the world. Tim Murphy's Blind to Happiness and Nicole Pandolfo's Love in the Time of Chlamydia are both gorgeous one-person shows that emphasize excellent writing performed with raw honestly by their authors. Emleigh Wolfe's The Terrible Manpain of Umberto MacDougal is a hilarious study in the humor of simplicity. The clowning in both LOL: The End and Big Girls Don't Cry showed the diversity of the clowning genre. No. 11 Production's fantastical love story Coosje, and Bricken Sparacino's deeply personal Death- It Happens, A Girl's Guide to Death were also favorites. Some of these shows have a Hangover extension date, so even though the festival has ended, there's still one more chance to see them at the Kraine Theater this week.

You can find Rabbit Island at the Kraine Theater, 85 East 4th Street, NYC. For tickets hop your little tukas over here.
Posted by Unknown