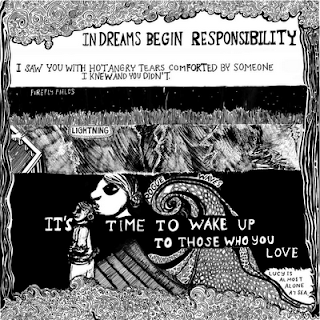 What was the inspiration for the graphic novel Swell?

Juliacks: Fiction comes from a lot of places-but it began with the idea of imagining a girl who moves into a tomb after her sister died. I always loved the poem, "Annabel Lee" by Edgar Allen Poe when I was little and that American romanticism of dark death and oppressive love/loss was a good jumping off point.

How did the idea of adapting Swell into a play come about?

J: In 2007 and 2008, I was doing a lot of non-narrative performance art related to Swell about the abstraction and construction of memory. The spaces, images, movements and effects of the performances met with the narrative of Swell in a layered and diagonal way.

After doing the performance, Egg Ceremony in 2008 about the abstraction of memory associated with guilt and grief-I approached Kathleen. Egg Ceremony was a complex performance score where the viewers were inside the narrative memory as it evolved. It was powerful but impenetrable. 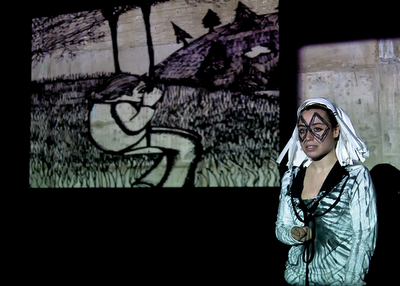 With Kathleen directing the play, the narrative could be pulled out with her intelligence, creativity and objectivity.

Kathleen Amshoff : When Juliacks showed me the unfinished book Swell, I was immediately attracted to the glut of images, the rawness and the idiosyncratic journey of the protagonist Emmeline. I remember finally getting the last book, reading it at home in Brooklyn and being so moved by the way Juliacks concluded the arc.

What were the challenges in changing the form?

J: This book moves through memories, dreams, time, first person and third person. In a play-communicating that logic and change is very difficult!

K: Usually I talk about the difficulty of handling the narration in the book. But now that we're open and I watch the whole thing, I'd say the most interesting challenge is developing the scenes in the book (which mostly take up one page, leading naturally to scenes of similar lengths) to contrast each other in duration, tempo, tone, etc. 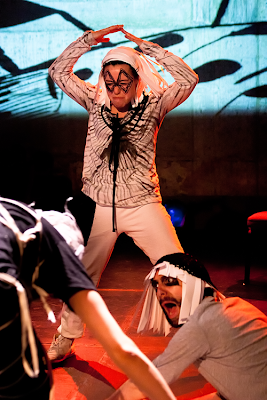 K: Juliacks and I met here and there about the project for several years, worked on experimental excerpts of the play in NY and abroad -- the "performance" in our minds has taken many different forms.

Women Center Stage gave us our first platform to develop the whole story. What a gift. Both designers and actors began by reading the graphic novel aloud -- no script. It was fascinating to see what the placement of words on the page, even font style and size, suggested about intention. The design team gathered a lot of research images and played around with materials, projection surfaces and tools, unusual lighting instruments. Since we decided to play in the round -- in a festival set up for end stage -- everyone had to be very creative about utilizing and augmenting resources. Actors improvised a lot of material around the characters; very interesting stuff that could make it into a future Swell someday.

From there it was a process of teasing out the story, clarifying it where we thought we needed to, changing order of events sometimes. Draft upon draft upon draft. And I still feel like we can develop it much further. 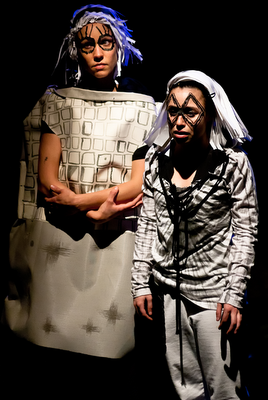 How did you meet originally?

J: We met in a class at Carnegie Mellon University called Performance for Video taught by Suzie Silver.

K: Julia and I both have two sisters and are interested in the dynamics of sisterly relationships. I made her watch "Cries and Whispers" and then we made a short video with a narrative and performance elements -- starring our future Emmeline Emma Galvin! -- that I think we called "Sister, Sister," That's when we started talking about Swell, in which the ambivalence of sister-love is a predominant element. 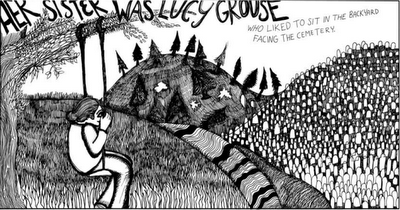 Kathleen, what is your background? How did you come to the theater?

Started as an actor, but I had hideous stage fright and was always floating over myself. I Ioved rehearsal but started to hate performing. Then I became a dramaturg and felt like my hands were tied because I couldn't directly shape the vision. I went to Berlin and directed a play, thinking: if directing doesn't work for me, I better get into some other field. Happily, directing was it. It's challenging and impossible and I love that. 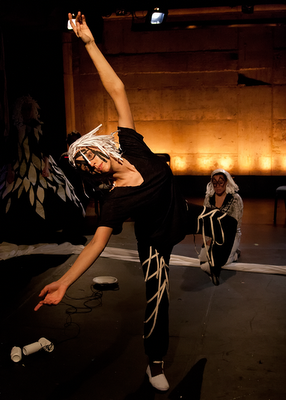 Juliacks, you work in various forms. How did you come to the arts?

J: Lately I write to myself or write letters to others almost every other day. There is no routine to my life, and therefore no routine for writing-except that because I'm moving a lot, I always have someone to write to, and because I'm moving a lot, I'm always trying to pin down my experiences to understand them in this chaos. Then the writing gets put in places to be made sense of and compartmentalized so that others may experience it and possibly understand it as well. 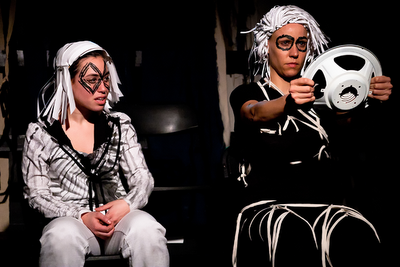 Where do you get your inspiration?

J: The moment of the idea is one of the most joyful parts of making. My writing process comes from chaos and fantastical playfulness, books, films, dreams, friendships, spirit quests, oceans, planes, mountains, wind, touch and disgusting experiences. On the other side, I'm also fascinated by neuroscience and the brain, speech-language and thought, cultural psychic and physical boundaries and spaces, the group consciousness versus the individual, the logic of cultures and stories.

K: People. What people do in a room together. That and a very archaic process of looking at a lot of pictures and pasting them in a notebook.

J: SWELL is going to the Atomic Center in Winnipeg, Canada October 31-November 7th and will be presenting at APAP in 2013. We have hopes to present it internationally, responding to each place and its particular way of negotiating the emotions of loss on an individual and societal scale. 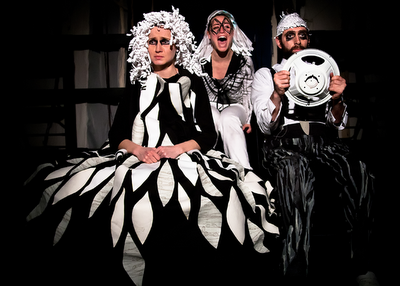 Individually Kathleen and I are also working on other projects well.

Related to the latter sentence about inspiration, I have begun and am working on a feature length art film, series of performances (quasi opera) and comic art book, "Architecture of An Atom."

The tale is about a group of adult children who move into an abandoned swimming pool in the Ardeche region of France. In the nearby outside periphery of the pool is the ancient Ardeche valley where the first known conscious humans began making musical instruments, representing the world around them and contemplating the unknown. On one of their excursions looking for food and herbs they find a strange object- a compelling sculpture that takes them into other worlds affecting their behavior and changing the course of their lives.

Globally created, the project is about the construction of conflict. So far there have been shoots in Sweden, Finland, and Rome. I will be doing a one day shoot in New York City on April 1st-please let me know if you would like to participate! 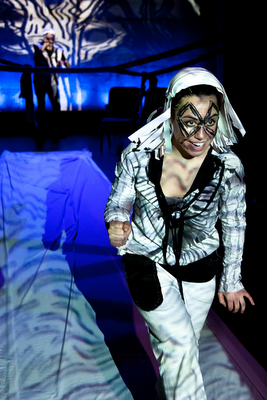 J: The Culture Project and the Women Center Stage Theater Festival are organizations that aren't afraid to be political, emotional, exposed, and vulnerable. After this experience working with them, I champion their cause. They believe in the work.

K: Have to second Juliacks here. I've already seen a lot of diverse and powerful work from the artists Manda Martin curated these past two years...and it's not just the work. There's a community of headstrong, wildly creative people forming around the festival. I'm glad to know them and their artistic pursuits. It's wonderful to be part of something that you can effortlessly and genuinely cheerlead for. 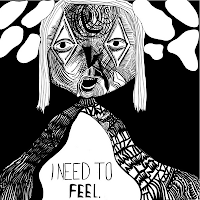