"Ever since the first time I stayed up past "Sesame Street" and "The Electric Company" to see my first episode of "Doctor Who" I never went back."
-Mac Rogers
Playwright
How did the BFG Collective come about and how did it get involved with The Secret Theatre?

SEAN WILLIAMS (pictured right): Several years ago, a big group of us started to try to coordinate our productions, purely because we didn't want to miss anything that the others did. So we would shift our runs by a week, or try to make sure we had at least an off night or two in order to see each other's pieces. About a year ago, we were at a community function with about 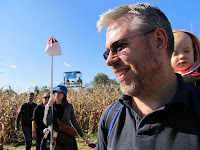 forty different theater companies and we were going around the room hawking our upcoming shows, and I mentioned that we were going to be producing a trilogy of plays in 2012.

Tim Errickson of Boomerang came up to me after the meeting and suggested that he could take the 7 or 8 weeks between our first two shows for their rep season, and as soon as he said that, we knew we wanted to talk to Gus Schulenburg at Flux to take the last space. We thought it might be possible to share resources, set pieces, labor, that kind of thing, and most importantly be assured that we could actually *see* each other's shows. The truth is that all three of our companies love what the others do, but we all do completely different things, so it felt like a really good marriage. The only problem we had is that we're all very picky about the kinds of theaters we are willing to produce in. 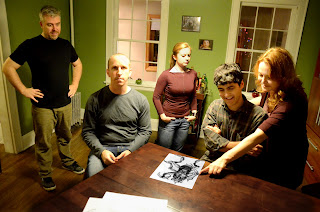 Because of our enormous good luck within The New York International Fringe Festival, we've ended up producing in some of the most beautiful off-Broadway houses in the city. We were completely spoiled by the Lucille Lortel and 45 Bleecker and The Soho Playhouse. And both Flux and Boomerang need space, actual breathing *space* for their shows to come alive. So we looked and looked for months, but couldn't find a place that had the room and the beauty that we really wanted, until we stumbled on to The Secret Theatre. Because so many of us live in Queens and Brooklyn, or right off the 7 in Manhattan, the space and the location were just perfect for what we wanted to do. Not to mention the fact that Richard Mazda, who runs the space, is an old theater guy from way back and just completely gets what we're all about.

How did you meet you guys meet each other?

SEAN: At school, where Mac was a student and I was a foul-mouthed hanger-on, I noticed that this tall goofy guy consistently said the funniest stuff whenever I was at a party. So, I started standing close to him at parties, until he finally said, "Who the hell are you?"

MAC: I worked with Sean and Jordana (Williams - Director) at the student-run Lab Theater at UNC-Chapel Hill. Jordana acted in a play I wrote my sophomore/her freshman year of college, so we go way, way back. In reuniting in New York (close to when they got married), we discovered that we shared not only a theatrical aesthetic, but also an ethic of providing audiences with top-quality entertainment while ensuring that we make the best and most courteous use of both our audience and our colleagues. "Gideon" was the name of Sean's Dungeons and Dragons character when he was younger, and that set the template for most of the work we do now, where we use the genre forms we loved as kids (and still love) while infusing them with more complex adult themes.

When did you form Gideon Productions and what has the experience been like?

has been one of slow and steady accumulation. We had to do a number of shows before people started remembering us from one show to the next. It honestly took until 2009 before we were able to enjoy a sense of public anticipation within a certain sphere for our shows, but the nice thing is I think we feel like we earned it.

Today, I have a firmer handle on my writing, Jordana is an accomplished and respected director, and Sean is a superb producer and a well-lived presence in the indie theater scene (and an amazing actor, as ADVANCE MAN audiences will see.) My wife Sandy joined Gideon a few years ago and has quickly become invaluable, and the set for ADVANCE MAN is a major creative triumph for her.

How do you work together? 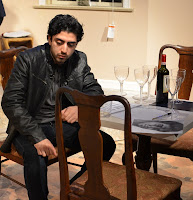 SEAN: There are four of us, and although we've tried to assign regular theater-company type roles to each other, the best description I've come up with is nautical. Sandy Yaklin is the engineer and shipbuilder; she comes up with all the physical plans for the things that actually exist. Jordana is the captain, steering the boat from the top of the rigging, able to see far further than any of the rest of us. Mac is the actual ship, the one thing that's keeping all the rest of us afloat. And I'm the engine, flooring it, making tons of noise, obnoxiously and furiously pushing us forward without really looking which way we're going. It seems to work out just fine.

What has it been like working on ADVANCE MAN?

SEAN: There was a moment, about two weeks in, when I was having trouble with my lines, when one of the rehearsals got very rocky, and I felt a little bit sad. After about 90 seconds of feeling sorry for myself, I was overwhelmed with the sense that, for the entirety of my adult life, I had always hope and prayed that I might be in a position where I was lucky enough to be worried about the very things I was worrying about. This has been, beyond a shadow of a doubt, the very best project I have ever worked on in my life. 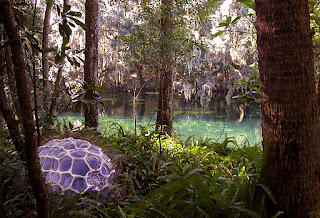 How would you describe The Honeycomb Trilogy?

MAC: It's a science fiction epic about an American family split apart by an extraterrestrial occupation, and, more specifically, about a sister and brother on opposite sides of a global civil war forced to make excruciating moral choices. It's action-packed, sexy, intense, hopefully funny, and hopefully somewhat moving underneath it all.

Do you go home and dream about pods? (I did.)

Sean: I didn't, strangely. And it's the first show where I didn't have The Actor's Nightmare.

Mac, how did you come to playwriting?

In elementary school I acted in children's theater plays and wrote pulpy sci-fi short stories. As I got less patient with the plays I was doing, it was inevitable that those interests would mix.
Were you always interested in Science Fiction?

For most of my life, certainly - ever since the first time I stayed up past "Sesame Street" and "The Electric Company" to see my first episode of "Doctor Who." I never went back. As a result of discovering science fiction at such an early, earnest age, it's always been very serious and meaningful to me, never campy. It was important to me that with ADVANCE MAN, the sci-fi ideas be taken as seriously as the human drama - to actually weave the two together.

What are most people's reactions when you tell them about the play?

MAC: Ha! Well, after my last two plays (both of which dealt with outlandish subjects) people know me pretty well by now, which means the looks have gone from "Uh, what?" to "Oh, you."

SEAN: People who are genuinely strange and funny. Quiet people that can't help but see and speak in their own worlds. Tall strange aliens that you have to go and stand next to in order to hear their jokes. Five year olds who make grownups laugh. Two year olds who are afraid of nothing.

MAC: I used to get inspiration from inside my self, my own inner emotional life. Thank God I don't do that as much anymore, that's rough. Now I get inspiration chiefly from genre forms - science fiction, horror, noir - and from news stories. As a result the plays have gotten a lot more enjoyable, both to write and (I think) to watch.

What other artists/shows are you looking forward to in the next few months?

SEAN: The Mad Ones "Samuel and Alisdair". "Yosemite" at Rattlestick. Flux Theatre Ensemble’s "Menders”. The return of my favorite Shakespeare production EVER Boomerang Theatre Company’s "Much Ado About Nothing". Ian W. Hill's plays at The Brick. If I could convince the entire theater world to start their plays at 9 PM, then every night I'd put my kids down and go see a show.

MAC: As soon as I get a day off from ADVANCE MAN, I'm headed to Catherine Trieschmann's HOW THE WORLD BEGAN, which I saw an amazing reading of. I'm also chomping at the bit to see Flux Theater Ensemble's MENDERS and a possible revival of a James Comtois play I've been hearing rumors of. 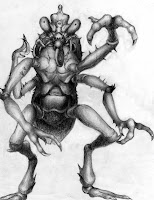