Dominic D'Andrea: the Fatherdude of the One-Minute Play Festival 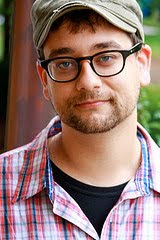 "There’s a whole culture of our generation that’s doing work from the heart, and a place of impulse, and from the gut..."

Since you ask playwrights to write one minute plays, I thought I’d ask you to describe yourself in one word. Just off the cuff…

There? There not here?

(laughing) There and here! Wherever. Call me and I’m there.

How did you come to directing?

I came to directing in an interesting way. In college, I was part of this thing called the American College Theatre Festival and I was really trying to get this acting nomination to be part of the Irene Ryan Acting Scholarship and I worked really, really hard on casting this production and when push came to shove, I didn’t get the nomination. Around that same time, the student association at our college was putting on a production of the Rocky Horror Musical and they needed a director, so I was like, what the hell, I’ll do this, and they contacted me and I did and it was awesome.

We caused a lot of trouble - we got into trouble with security on campus, something crazy like 2000 people showed up to see it one night, and because of that, I ended up being eligible for this thing KCATF was launching that year for student directors, and since I technically had done one college production, I submitted myself.

I was a sophomore in college, and never directed anything in my life, and somehow I got picked to be part of this directing thing. They sent me to a regional competition at Carnegie Mellon, and I walked into the room, and here I was nineteen years old, and everybody in the room was like thirty years old, MFA students from top schools, and I was so intimidated.

They gave us all the same play to direct and somehow I won, quote unquote, and they

gave me this opportunity to go to the Kennedy Center and be there as a director. This was in 1999, and I was like, ‘wow!’ I went down there, and met all these amazing people.

That’s where I met Marion McClinton. He was doing Hedly at the time, and I met Mead Hunter and Megan Monaghan, and ended up working here for a bit (the Lark Play Development Center) and I met a man named Eric Schaeffer - who just directed Follies that opened on Broadway a few days ago, and also runs the Signature Theatre in DC. We were talking and turns out we come from similar backgrounds, so from that point, I started working in DC Theater which was cool since it was my hometown.

So, when you were directing that first production as an undergrad, you weren’t thinking, ‘oh, I haven’t taking that directing 101 class…”

(Laughing) I did all that stuff later.

So what was your approach?

Common sense, which is sort of the way I direct now, which is something Marion and I were just talking about upstairs. He was just saying to me that what he’s really impressed with, in this generation of artists coming up, is that though most of us have some sort of training, or a lot of training, there’s a whole culture of our generation that’s doing work from the heart, and a place of impulse, and from the gut, and I thought, ‘yeah, I agree with that’. I think that’s very much true with me and every decision I’ve made. It’s been from the gut. 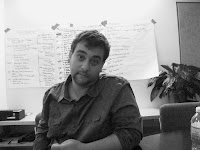 Of course, I did all my training and stuff, but it’s also been very impulsive - whatever I felt like I needed to work on, or felt like I needed to say. And most of that has been in conjunction with working with playwrights and ACTF in 1999, so those kinds of collaborations - which are difficult for some people - are very natural to me, and it’s almost weird when I don’t have a playwright in a process.

How do you work with your playwrights? Or is it unique to every situation?

Yeah, I think so. It’s mostly about starting from a place of goals. I think one of the reasons I’ve spent so much time here at the Lark is that there are so many way to learn about how to begin working with a playwright and, for me, my big education working in the theater has been with this company and with these people so I’ve been very fortunate to have that opportunity. 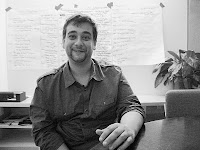 But yeah, it’s unique to every situation but it’s starting from this place of what do you want to know? What are your goals? If the playwright is able to articulate a set of things they want to work on, able to articulate why they wrote this work, what they’re saying and what they want to do with it, I kind of look at that, and figure if I can help, or be a part of that, or push it, or bring it to a reality in some way, or if it seems like a project that would fit for me.

Do you find that most playwrights are able to articulate those things?

Yeah, I find that it’s different for a lot of people. I think the playwrights that I tend to work with are playwrights that are able to articulate those types of things, sure. But I can certainly think of many playwrights who I respect who can’t articulate their work so well - maybe they’re types of playwrights who are writing from a different place, or have a different style, or have a different thing to say, and their work is awesome, too. There’s a whole laundry list of people that I’d love to work with, and it’s because I have no idea how they work, and I respect it, and love it, but it’s so opposite from where I am. 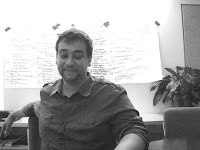 Sibyl Kempson. I’ve worked with her before but not in a deep way. There’s nothing recognizable about her process or the work that she does. It’s bizarre, and it’s wonderful, and it’s really, really challenging dramaturgically and idealistically.

She’ll make a play where her and her friend do a hundred roles - two people, and they’ll either be in a scene by themselves or another person, it doesn’t matter, and it’ll just sort of sprawl. Or she’ll write a play about these people who are aging, and act one will be about them coming to terms with where they were in their life, and act two, these alien potatoes descend upon the world, and capture them, and take them underground, tie them up, and have a debate about the meaning of life.

So, it’s like I have no idea what the impulse was for that, but it’s amazing, and something that I just can’t pinpoint the genesis of, but definitely when experiencing it, understand what it means viscerally, and I really value those experiences that challenge what I know and think.

What you were saying about this generation of artists coming up being more instinctually inclined in their approach… do you have any ideas on why that may be?

I think it has to do with the fact that this generation has been subjected to so much institutional programming and so much institutional thinking. I think if you look at the generations before us, not everybody has had an MFA or undergraduate program, not every theater had a structure that allows or accommodates emerging artists for better or for worse in a very specific way, not every theater had a playwriting program, or a blind-submission process, or a reading series, or some kind of school or class opportunity.

I mean, back in the day, I think people who wanted to work in theaters did the assistant thing and then sort of came up through the ranks, and I think now, our generation is so subjected to, ‘Oh if you want to work for that theater, you have to apply to the thing.’ We’re always applying to things, so in response to that, people are getting away from that system and going back to the theater that people want to make, perhaps. I’m assuming.

I mean, I notice that it’s true for me and some of the people that I work with. And there’s always a balance between your institutional involvement and the stuff you want to do outside of that realm. And it’s a healthy balance. I think it’s good to be part of institutions, and it’s also good to have opportunities to explore your own voice on your terms. But I think the impulse being what it is, is to work on your own terms perhaps.

I know that you can’t name everyone, but just off the top of your head, what are some of the artists and theater companies that are doing that right now?

Young Jean Lee’s Theater Company, Nature Theater of Oklahoma, the work that the Amoralists are doing; I think they’re really smart. They’re sort of becoming their own institution by doing things on their own terms. Rude Mechanicals, certainly – they’re kind of an institution but they’re doing it on their own terms and toured their own work. And any number of international companies that come through. 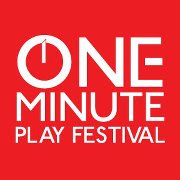 Part Two will continue with the genesis and inspiration behind the One-Minute Play Festival which is being co-produced by Primary Stages at 59E59 on October 16. For more information, take a minute right here.