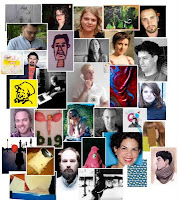 "It kind of just says 'go there, jump into the water and stop thinking about it." -playwright Daniel Talbott
You sit in a circle and someone whispers a sentence in your ear. You pass it on "as best you can" to the kid sitting next to you.
By the time it reaches the last kid in the circle, the sentence has changed in unimaginable ways that usually leads to giggles and delight for one and all. Overturn Ensemble takes this familiar children's game and gets crazy on its Pampers - and this week - you get to play, too.
MAKING THE CALL
"After reading about (LES bar/gallery) Culturefix in the NYTimes, I reached out to Lia Woertendyke (the gallery director) about a possible collaboration back in January,” said Overturn Ensemble’s Artistic Director Kristy Dodson. “Lia and I shot off a number of ideas and I think they eventually just all came together in a crazy hodge-podge of the arts. There are so many up and coming playwrights, not to mention those that proceed us, who were inspired by visual art (Brooke Berman, Crystal Skillman, Christopher Oscar Pena, etc.) and I thought, why doesn't someone do that? …So while it started with visual to kinetic, it eventually had to cover our senses as a whole.”
WHEN THE PHONE RINGS, PICK IT UP (It might be something yummy.)
"It all began with (Culturefix co-owner and chef) Ari Stern's dish which he named Chinese

Whispers, which is the Australian name for the American Version of the game Telephone. That kind of creativity from the get-go inspired everyone else to think outside the box,” says Dodson.
From a bite of the above-mentioned inspiration, composer Michael Vincent Waller wrote a piece of music which was performed for sixteen artists who, in turn, created pieces of art which then served as the inspiration for sixteen playwrights from the Overturn Theater Ensemble who had only one week to write plays that were then brought to life by professional actors and directors.

So basically, alls YOU gotta do is go to Culturefix any night of this week at 6:00 (show starts at 6:30), order a drink from their “carefully curated selection of wine and American and European beers”, scoot your derrier to the back and place those ears of yours in the headphones hanging from the wall on your right and listen.
Listen while focusing your pretty peepers on the art hanging all around you. Imagine what the Chinese Whispers tasted like. Masticate the magnificent of inspiration between your pearly whites. Marinate your mind in the juices of brilliance.
EASY, RIGHT?
“It was tougher than I thought. Initially, I wasn't flooded with any ideas that I wanted to write about,” said playwright Mando Alvarado. “I wanted to challenge myself. And it was hard to get any real detail off the picture I was sent. So I thought about the theme and I slept on it. Woke up wanting to put a twist on it, and that's what I did." 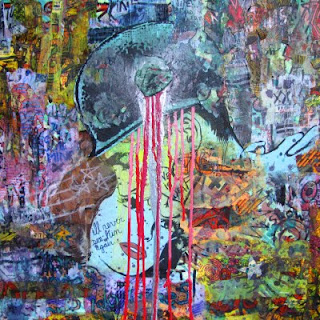 Alvarado’s play, Mambo Love Bomb was inspired by One Minute to Foreverever by Nico Traut (pictured above). “It's about a Marine who is about to be sent to Vietnam and he decides to visit his ex-lover. Unfortunately, his lover is still pissed off about how things ended and decides to take revenge, in a cinematic way.”
“I loved not having a lot of time to think about it, or to over-think it,” said fellow playwright Daniel Talbott. “I really appreciated that someone just sent me a surprise and said run. It was great and felt really freeing and fun. I often think time constraints can be insanely helpful because you have no choice but to dive in - it kind of just says 'go there, jump into the water and stop thinking about it - let something outside inspire it, give over and just see where it takes you'." 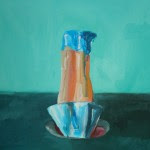 Talbott's play, based on the painting by artist Anthony Iacono, called "Second Helping #15"(pictured right) is called Break My Face with Your Hand. "It's about this omni-sexual kid called Bear and this other high school student, Trev, who are forced to spend an hour a day for a week after school together in Bear's grandma's kitchen because of Trev's treatment of Bear at School.”
“I'm not quite sure why that's what I ran with from Anthony's painting but I started with that and also a song that my friend Aria sent me around the same time that I got the painting, and it sort of just happened from there.”
Talbott's play is going up Friday, July 22nd with Cecilia Copeland's play, Velvet Eggs, inspired by Christine Rucker’s painting, Venn Diagram: Pt IV.

"Velvet Eggs is about a woman appreciating the male body, exploring heterosexuality in a world where being straight can translate to conservative, and finding a way for both a man and woman to connect in a way that is as much

about emotional nudity and love as it is about physical attraction.

The most jarring thing about the process,” continues Copeland (pictured), “was that my painting was worked on past the deadline. So when I saw it in person, it was different than the JPEG. I felt somehow hurt by the artists, tricked…but then I thought, well, I guess that's part of the "telephone" aspect of it."
Jeffrey James Keyes adds, "I feel that when you give artists from different disciplines the opportunity to be in dialogue or in the room with each other, the creativity becomes charged, electric." His play, Electra on the Strip was based on Cara Shih's piece, “The House, It Sings” and is a retelling of Euripides' version of Electra in which Orestes returns home and kills his mother.
“I was on a work trip to Las Vegas when I received the image and couldn't resist 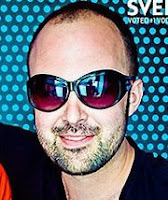 setting the play in a casino on the Strip. That night I went to see an amazing drag show (Frank Marino's Divas Las Vegas) at the Imperial where Frank Marino, dressed as Joan Rivers, presented an incredible line-up of drag queens.

It came to me, Clytemnestra is the hostess of a burlesque/drag show and Electra and Orestes would be the performers. In a weird way, the spirit and buzz of the glamorous life of Wynn's Encore Tower Suites, where I was staying, completely inspired the piece. I raced to write the play late in the evenings in the Encore Tower, as I looked down at an incredible view of the glam and grit on the Vegas strip.”
"For me, it was a return to my writing roots." says Carmen Palaez, (pictured below) whose play, Wrapped in a Bow, debuted Monday. "I learned how to write by going to museums and actually spend much more time in museums than theaters."
Her inspiration was Dan Giordano's painting, Four Fold Knot. "The painting is a collage of five cut-outs of women from the waist down in pornographic positions,” describes Palaez. “It’s on a gold background with a snakeskin cut-out and a man's traditional shirt-cuffed hand pointing an arrow to one of the vagina's that has a vibrator inserted into it.”

“Its graphic nature wasn't shocking or provoking just boring…” continues Palaez. “I didn't connect with this particular painting at all. There was nothing about it that spoke anything that I like to write about. And this isn't a knock on Dan-he's gifted. It's just this particular piece wasn't something that I wanted to live with in my head and it inspired only banality - which was fine because I thought of the person with most banal perspective I have ever known and wrote about him.”
SO, YOU GO SEE THE PLAYS… NOW WHAT?
“Get to know us! We are always so excited to meet artists (of all genres) that are interested in creating something life changing for the theatre that will move it into the 21st century,” says Dodson. “Come to our shows and tell us what you are up to and what your big dream is... we love to talk about big and crazy dreams.”

Telephone is at Culturefix, 9 Clinton Street, NYC until July 24th. Play readings begin every night at 6:30 in the gallery. Tickets are $10 available on Brown Paper Tickets.
Posted by Unknown