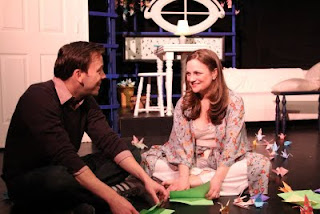 "When one of your actors pops an air mattress with her heel while rehearsing a spanking scene, a sense of humor is required..."


What was the inspiration for Paper Cranes?

Paper Cranes was inspired by a book I’d read as a child called Sadako and the Thousand Paper Cranes by Eleanor Coerr. It told the story of Sadako Sasahi, a 12 year old Japanese girl who got leukemia ten years after the atomic bombing of Hiroshima. When she found out she was sick, she wanted to fold one thousand paper cranes (called senbazuru; it is thought that anyone who finishes all the cranes will be granted a wish). The book said that she didn’t finish folding before she passed away, but her friends and family finished them for her. This turns out to be a bit of creative license; Sadako did finish the cranes and continued to fold up until her death.

The play started when I was on a flight to Chicago. I had this image of a woman folding cranes by her husband’s bedside come to me and just started writing. There was something so beautiful to me about this little girl creating in the face of illness and destruction. I think humans strive to keep people alive (including themselves) in various ways. We all try to cheat and evade death and loss, and I think that’s part of what I was exploring here. I was also interested in talking about sexuality as both life force and as a way to avoid intimacy. Sex and death are opposite sides of the same coin, and there’s definitely exploration of the two extremes in the piece.

The rest of the inspiration came from various aesthetic obsessions, but the Sadako story was the catalyst. 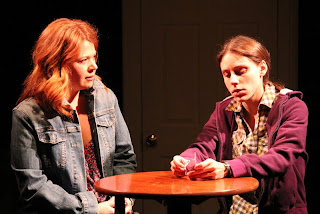 I wrote the first draft of the play by working with The Pack, a once-monthly meeting of writers, directors and actors. It is the brainchild of Alejandro Morales and Scott Ebersold, the founders of Packawallop Productions. I brought in the first monologues for Paper Cranes in late 2009. The response from the group was really positive, so I kept bringing pieces of the play in every month for over a year. The feedback was so vital to me. Susan Louise O’Connor (who plays Amy) has been creating the part with me from the beginning. I am so lucky to be working with someone as talented and giving as Susan is.

Once the play was finished, I had two internal developmental readings where we brought in actors. That was how we found Sarah Lord (who plays Maddie). Alejandro Morales worked very closely as dramaturg and was helpful beyond measure. I felt nurtured and supported through the whole process, and they definitely kept me on top of my game.

Because I am on the board of directors and contributed some of my own money to the show, I was also intimately involved in the actual producing aspect of the show and worked closely with Jay Aubrey, our producing director. I have learned a lot about fundraising and the inner workings of a company. It’s been fascinating.

How was that development different from other experiences you've had?

This is only my second full production, but it was very different. My first production was in FringeNYC, and it was white-knuckle, guerilla theater. I had an amazing producer, cast, and creative team, but it was a panicked time and we only had 5 performances. I got more time to craft and refine this play and we have 16 performances. Working with Packawallop from start to finish on a show is an enviable experience. One thing that Packawallop does better than anyone else is creating elegant, beautiful productions with superior attention to detail. Paper Cranes is no exception. I think that it is a really beautiful show. I’m so proud of it. 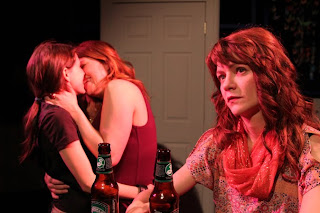 How did you work with your director, Scott Ebersold?

Scott and I have been friends for several years. I found that working with him was a really comfortable and collegial experience. We had lots of long discussions (sometimes over martinis!) and were, overall, on the same page most of the time. We worked as a team to make this show the best it could be. Scott trusted me to do the right thing by the script, but there were times he’d write a note to me saying “what if this line went towards the end of the scene, because then it leads into this next scene?”, and the light bulb would go off. He was very focused on the transitions and the relationships between scenes, and that focus helped me immensely with the shape of the piece.

I was in the room for most rehearsals, and he let me have a great deal of input. He was so generous with his vision and time. As a result, I think everyone has had a good experience working on this show. Scott is a huge, huge part of why the play is what it is, and I’m immensely grateful to him. He also bought me Cadbury Mini Eggs the other day. Anyone who can anticipate my need for carbohydrates is my ideal collaborator.

And the rest of your team?

My cast is totally amazing and the nicest group of people you’ll ever meet. We’ve had a total blast getting to know one another, and I consider all of them dear friends. Kyle Fox, our assistant director, provided so much intelligent and helpful insight during this process. He’s become a fast friend and has a big future ahead of him. Amy Schott, our stage manager, brings a professionalism and precision that keeps our show moving seamlessly every night. We also have a fabulous team of designers that I am so glad didn’t kill us with our constant last-minute changes. We all got along really well, and we laughed a lot. When one of your actors pops an air mattress with her heel while rehearsing a spanking scene, a sense of humor is required! 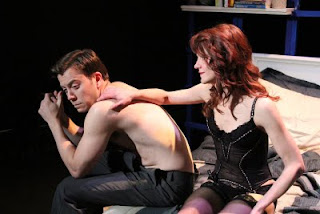 How did you get involved with Packawallop?

I had known Alejandro Morales for a while (he directed one of my readings and was the first champion of my work), and I went to see the FringeNYC production of his play The Silent Concerto. That’s when I met Scott and the rest of the gang. The first Packawallop show I worked on was Adam Szymkowicz’s Nerve. I helped with concessions and box office. Ever since then, I’ve had some role to play in the company, and I am now a member of the board. It’s a great company and I’m honored to be a part of it. Having an artistic home is so important, and getting to make theater with your friends is the best.

I’d love to say that I get up at 5 every morning and write, but it’s not that way. I don’t really have a schedule. I work a 9-5 job and try to see as much theater as I can, so my schedule is erratic. I will say that I do try to write something every day. Sometimes it’s a blog entry, sometimes it’s a one pager in my notebook, sometimes it’s a scene. I’ve realized that I write much more than I think I do, and the majority of said writing does not happen when I am on a computer. Paper Cranes was written almost entirely in notebooks. 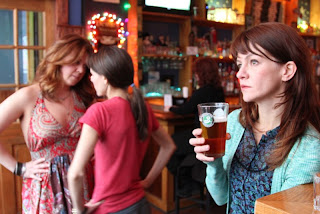 Everything. There’s so much amazing work happening in theater right now. I am proud to be a part of this season in NYC. I also just finished reading Let The Great World Spin by Colum McCann, and it is one of those rare books that leaves you feeling changed after you finish it. I find spring in NYC very inspiring.

What are you working on now?

Paper Cranes has taken up most of my time over the past 6 months or so, but I’m gearing up to work on brand new stuff this summer. I just started a new full length play that is (so far) about a flight attendant who is the sole survivor of a plane crash and what her life is like after. I am also collaborating with my friend Jason Loffredo on a new musical, which is challenging and awesome.

Paper Cranes runs until May 8th at The Access Theater (380 Broadway, 4th Floor at White Street, NYC). For more information or to purchase tickets you can go to www.packawallop.org.