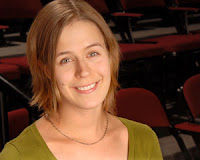 "I am fascinated by families, especially families, like my own, where people struggle with mental illness and developmental disorders."

GOOD EGG
Responsible Meg has always taken care of her bipolar younger brother Matt. But when she decides to get pregnant—and have her embryos screened for bipolar disorder—is she taking the idea of "being responsible" too far? A funny and surprising play about bioethics, siblings, and the limits of unconditional love.

What was the inspiration for GOOD EGG?

Honestly, this play began out of my own questions and anxieties about possibly one day having children (I started the play in 2007 when the question was pretty hypothetical). I was fascinated by the notion of choice and all the ways in which it has affected contemporary women's lives, especially around fertility.

Everything now is presented as a choice (to have children at all, when, how, with whom, why) and while I certainly wouldn't give back the invention of birth control, I also wondered, how far do these choices lead? What does it mean to approach motherhood with a set of options at your disposal?

I am also, on a very gut level, fascinated by families, especially families, like my own, where people struggle with mental illness and developmental disorders. I wanted to explore how these relationships affect the "sick" member and the "normal" ones, and how, in a lot of ways, the issues are the same as in any family: guilt, joy, resentment, companionship, betrayal, and love.

Also, I am a big fan of old movie musicals.

How was it developed?

I wrote GOOD EGG while I was in grad school at Yale, in my last year. I was very lucky and got to see a production of it at school during the Carlotta Festival of New Plays, directed by Snehal Desai, with John Doherty and Liz Wisan as Matt and Meg. I learned a lot from that production, and the play had several readings (at Arena Stage, at Ars Nova, at Geva Theater, at the ATHE conference) at which I continued to learn more.

For a while, it was the little play that almost could --it came close to being produced, but wasn't -- and then in 2009, just as I was getting ready to accept that it might never be seen, two things happened. I got an EST/Sloan grant to re-write the play substantially, and I had a reading at Red Fern of the new draft which led to the production.

Have you worked with Red Fern before?

Only at the reading.

How did you become acquainted with each other?

I got an email through Youngblood with their call for scripts, and GOOD EGG seemed like it might be a match for their mission.

You got your MFA from Yale. How has post-grad school life been?

It's been pretty good. I lived in New Haven and worked for Yale in the year after graduating, while commuting into New York for Youngblood meetings or to see shows or for auditions and rehearsals of my play CAITLIN AND THE SWAN. Then, in summer 2009, I moved to Los Angeles because my husband Colin Wambsgans was starting grad school at CalArts. The move cross-country has been a bigger adjustment than graduating, but I'm slowly figuring out my version of a bi-coastal life.

Would you recommend writers get an MFA and why or why not?

Oof. I think it really depends on what you want to get out of it. An MFA isn't permission - it's not some sort of document that makes you a more "real" playwright than anyone else. And it's not a guarantee that things will go a particular way -- plenty of writers get MFAs and struggle, plenty of writers who don't have MFAs are produced all the time.

I do think it provides a certain kind of opportunity (to meet great collaborators, to meet amazing faculty) but if you go into it for any reason other than you actively want to spend X number of years doing whatever it is you'd do at that particular program, I think that's a recipe to be a resentful grump. So, if you can find a place that you can afford that you think you'll actually like, go for it. I am really happy I went to Yale but I wouldn't recommend it to everybody.

It completely varies play to play -- my most recent play, STATUS UPDATE, I wrote the 1st draft of in a month, working pretty much every day, as part of the Playwrights' Union play-in-a-month Writing Challenge.

Other plays take longer or take lots of research, or get started and put in a drawer and taken out after a couple months, like another play I'm working on now that seems a harder nut to crack. Every once in a while something will come really fast, especially if I'm under pressure, like my play JESUS LOVES YOU, MAKE A COLLAGE that I wrote for Chalk Rep's Flash Fest. I've also recently started writing screenplays and, for whatever reason, my screenwriting schedule is a lot more consistent (about 3 hours a day when I'm working on one) than my playwriting work.

What have you seen lately that you've liked?

Hmm, lots of stuff. I saw THE ELABORATE ENTRANCE OF CHAD DEITY which I thought was really cool and theatrical in a way that seemed exceptional to theater and probably really ordinary to wrestling, which is neat.

TIGERS BE STILL by Kim Rosenstock at Roundabout Underground.

And THE SOCIAL NETWORK and TOY STORY 3 are sleek and smart machines that make you realize how much movies can accomplish when they work super-hard at being good.

What plays and playwrights do you love?

RUINED by Lynn Nottage. It is well-made. It is a play. And I think it was way more daring than most experimental work.

TOP GIRLS by Caryl Churchill. It's secretly about all the same things as GOOD EGG, but don't tell anyone.

ARCADIA by Tom Stoppard. This is an early love, and will always be a favorite.

ESCAPE FROM HAPPINESS by George F. Walker. He is Canadian. It is fantastic.

How do you keep yourself inspired?

This is actually a really difficult question because many of the things that most inspire me (politics, the Internet, pop culture) are also the most powerful distractions that prevent me from doing my work. So, on the one hand, I'd say, watch lots of reality TV and read 15 political blogs a day. On the other hand, that's a great way never to write a play. I guess I stay inspired by staying confused and angry and fascinated by people, and then turning off my wifi so I can actually write.

GOOD EGG will premiere October 21 through November 7, 2010, at the LABA Theater located at the 14th Street Y at 344 East 14th Street between First and Second Avenues.

"Pay What You Can" 10/21 and 22nd. You need to make a reservation by emailing pwyc@redferntheatre.org. Also, $10 tickets for opening night 10/23 and Monday 10/25. Just enter KEL as the code upon checkout when buying tickets from the website or through Theatermania.