Sheila Callaghan Takes Us Inside Her New Play, Roadkill Confidential - A Noirish Meditation on Brutality. (It's fun, too!)

I tend to start with an image, a feeling, an idea, a set of phrases, an emotion, a setting, etc, and then unravel the story from whatever bit of inspiration triggered me in the first place.

What was the inspiration for Roadkill Confidential?

For Roadkill Confidential, I researched work by the Critical Art Ensemble, a performance and installation art collective focused on the intersections between art, critical theory, technology, and political activism. In the spring of 2004, its member Stephen Kurtz, a founding member of the group, was detained without charge under terrorism legislation due to suspicions aroused by his artwork, which often uses biological specimens, including pathogens, and ran afoul of terrorism legislation. He was ultimately proven innocent of any suspicious threatening activity, but his case made me ponder the intersection of art and fear; when art provokes terror, is that provocation personal or global? When the goal of the art is to incite mass fear and hysteria, is the difference between art and terrorism purely contextual? And when violent acts are committed in service of the "greater good"," what is the moral obligation of those who commit such acts—-- to take responsibility for the acts themselves, or to justify the goodness of the goals? Or both? And... what is the true price of fame?

How did it develop from its original inspiration?

I began writing this play at the Millay Colony, which is up in the Berkshires. I was there in the fall, when the air was turning crisp and the leaves were turning brown, and all the bugs and animals were scurrying around trying to find warmth. I wrote daily in a huge converted barn, and walked nightly in the dark to dinners up the hill amid the trees. This setting soon crept into my subconscious, then my conscious, then right into my play. What better place for a noir play than a creepy darkened road in autumn in the middle of the woods?

When you envision a play, does it stay relatively true to that vision in its final form or does it take you somewhere else? (Generally and specifically to the play)

I tend to start with an image, a feeling, an idea, a set of phrases, an emotion, a setting, etc, and then unravel the story from whatever bit of inspiration triggered me in the first place. This play had a lot of narrative fumblings in its birth canal, and characters dropped in and out, and the thing took its sweet time finding itself—one iteration even had a scene with a singing frog in a sombrero! Don’t ask. But the tone was the thing that remained consistent throughout the writing process from start to finish, and it guided the writing throughout.

How involved was Clubbed Thumb in the development of the play?

Clubbed Thumb was involved from start to finish on this project. Maria Striar commissioned me, held countless readings in her living room complete with whiskey, wine, homemade cookies, or egg lemon soup (as the occasion required), offered specific and rigorous dramaturgy, and of course produced the play. Maria has a great ear for rhythm and a brain for logic. The play is a stylistic and structural departure for me, and Maria helped me hone the peculiar music of it throughout my clumsy half-blind stabbing attempts. 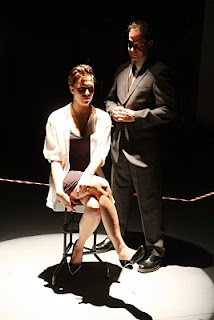 Trevor is such an interesting character. Can you talk a little bit about her? Where do you see her a year (or five) after we leave her in the play?

Gosh, she’d be in jail, wouldn’t she? For manslaughter? We have often discussed what crime she actually committed in this play… certainly she’s guilty of attempting to present some sort of killing machine to folks who were not cognizant of its danger… but she never actually pulls the trigger herself. I’d have to consult with a legal expert to figure out exactly what crime she’s guilty of, but I know it’s something! As for my inspiration for Trevor… I am attracted to martyrs, I think. Must be my catholic upbringing. I find narcissists and people with god complexes incredibly compelling, as long as they have something to say. It’s interesting to me that a human being can think so highly of herself that she’d be willing to sacrifice herself on the alter of fame for a set of beliefs. And I do think fame-chasing requires a certain sacrifice—of ego, of privacy, of grounding.

Can you expand on the idea of the “Marvel” and how and why Trevor is the keeper of it?

This goes along with the god complex. She sees herself as chosen. She knows a dark truth about humanity which must be exposed at all costs. The marvel is her knowledge, her gift, that she must impart unto the masses.

In the script, you leave a lot of room for directorial interpretation. What kinds of conversations did you have with the director Kip Fagan and how closely do you usually work with your directors?

My directors tend to be my primary collaborators on a play — dramaturg, muse, confidant, therapist, etc. Kip and I have acquired a kind of shorthand over the years, and he understands my aesthetic so well, that our conversations were minimal during the production process. The bulk of the talking we did on the play happened before rehearsals even started, as we were trying to figure out the nature of the creature. I was on a different coast throughout the production, so it was crucial that we had baked out the ideas beforehand, as I didn’t have the luxury to do this in the rehearsal room. But still, I flew back to NYC three times and did two Skype sessions with Kip and the cast in order to keep on top of the questions that had yet to be answered in the script.

What is your writing process? Does it change depending on the project?

It often does depend on the project… but these days it also depends on my schedule. Sometimes I have the privilege of sitting around all day in my apartment in my jammies, sipping coffee and eating yogurt and trying to get into the world of the play between web-surfing badly dressed celebrities and gossip sites and twitter… and then sometimes I rush home after my TV job, have dinner with hubby and baby, and then rush off to a nearby café for a solid 3-4 hours of nighttime writing… and then occasionally, I will lock myself in my office on the Paramount lot for the weekend and sleep on the couch, and muscle through a project while eating wheat thins and miniature Milky Ways.

How much rewriting do you do in rehearsal?

A bunch. Everything changes when smart actors start asking probing questions with a production on the horizon.

How do you balance writing for TV and playwriting? Do you have a preference between the two?

I love them both for very different reasons. Sometimes I love being a cog in the machine, and sometimes I love being the machine itself. TV is great because you get to explore emotions on such a micro level, with a look or a nod. Also I love the collaborative nature of coming up with stories. I’ve been very fortunate to work with amazingly smart, gifted writers who are so good at talking about crafting meaningful moments between imaginary people. It takes some of the pressure off me, as someone who is used to being responsible for every aspect of a script. But of course, it’s hard to beat the headiness that comes with creating a theatrical world from top to bottom and then populating it with skilled artists who can take your own singular vision a step further. TV doesn’t allow for this, unless you are a show creator or show runner. I am so unbelievably lucky that I get to do both.

What are you mulling over, musing on these days?

Right now, this very second, I am studying fashion like it is my job. I am on the fashion websites three and four times a day. I am also writing a play that has fashion as a centerpiece. You wouldn’t suspect this was an obsession of mine based on my wardrobe, though. I follow it like some couch potatoes follow soccer. The frivolity and the glamor of it coupled with the skill, the vision, and the utility feels like a guilty pleasure that has more than a tinge of artistic merit.

Roadkill Confidential is presented by Clubbed Thumb, and directed by Kip Fagan. It runs off-Broadway from September 7th - 27th at the 3LD Art & Technology Center (80 Greenwich St.) in NYC. For more information, visit Clubbed Thumb Tickets are $25 for adults and $18 for students and can be purchased here or by calling 212-352-3101.