Blair Singer's play, Notice Me, rocks the hizouse at The Wild Project 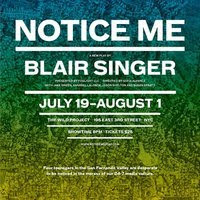 I was challenged by a former agent to write something "young and hip." His quote, "Nobody wants to watch old women on stage." I figured, "I'll write the dirtiest play about teenagers I can come up with and when I'm done, I'll fire him."

Since playwright, Blair Singer is currently in L.A., I sent him a bunch of questions and asked him to write answers to them stream-of-consciousness style with no editing. Blair never disappoints.

1. What are you wearing?

It's 10:22 p.m in Los Angeles and I've just taken a long shower. I always take a shower before I go to bed in Los Angeles. And, still, I never feel clean. Yes, the metaphor is intentional.

2. What was the inspiration for your play Notice Me?

I was challenged by a former agent to write something "young and hip." I'd recently finished a play about two middle-aged women who went to clean out their deceased mother's assisted care living apartment and this "agent" didn't think I should be writing plays like that. His quote, "Nobody wants to watch old women on stage." I figured, "I'll write the dirtiest play about teenagers I can come up with and when I'm done, I'll fire him." Sadly, he quit before I could fire him. But I got a better agent.

3. What was your process in writing it?

I wrote it fast. And then I rewrote for about five years. Sometimes for the better. Sometimes, I wrote down dark alleyways and spent months trying to find my way back.

4. How did Notice Me get developed/produced?

This play has been developed and read at many, many theaters in New York and has been passed on by many, many theaters in New York. And it's been passed on for many, many reasons, none of which I choose to remember. And then my agent, the new agent, the great agent, Olivier Sultan, introduced me to some lovely producers who tried like hell to get it produced for about a year. But that didn't take. So then this brilliant young writer/director, Sofia Alvarez, came out to Los Angeles and I bought her coffee because she's very cool and I so desperately want to be cool too and we talked about how I'd always wanted to do the play with young actors who wore their hearts on their sleeves, and she said, "Let me direct it." Um. Okay. Best four dollars I ever spent on coffee.


5. What was your background?

I was an actor. I wasn't very good. And I like going to work. Being a bad actor is a good recipe for unemployment. So I devoted myself to writing. The jury's still out.

6. What helps you write?

Nothing helps. Writing is a sickness that is never expelled from your body. Although, a good muffin and a decent cup of coffee can get me through the first few hours of work. Hot liquids. Hot liquids are the key to a day at the desk.

Bejeweled Blitz hinders me. It's a stupid fucking game and I'm embarrassed for playing it. I actually don't believe in writer's block. I write all the time. Mostly what I write is shit that I eventually throw away, but if I don't write something every day, I feel like I've wasted my life.

8.What is turning you on right now (in your writing)?

I like to start early, say 8 or 9, and go to 5. That said, most of that time is spent avoiding work. I heard Tony Kushner give a speech where he said he spends nine hours avoiding writing and one hour actually writing. I want to be just like Tony Kushner.

10. What are you working on right now?

I'm working on a TV show on the USA Network that is untitled as of now... I love the creator of the show, Michael Sardo. He's got a huge heart and it comes across on every page. He's making something that doesn't exist on television right now. He's bold, brave, hilarious, and heart-breaking.

Work hard but don't be hard on yourself. Writing is a fucking hard business. Enjoy every success that comes your way no matter how big or small. If you can't enjoy the small successes-- a reading of a new play of yours that didn't completely suck-- then you'll never make it through a writing career. Because so much of it is a slog. And, so, you must enjoy it when you have the opportunity.

I had a delicious chicken teriyaki bowl for dinner tonight.

Notice Me is playing at The Wild Project at 195 E. 3rd Street in NYC through August 1st at 8pm. You can buy tickets at www.noticeme2010.com.
Posted by Unknown