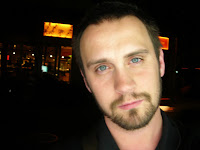 As a theater artist, you wear a lot of hats. Where did you begin?

I think I started as an actor because it’s easier as a kid to start that way. There are a lot of acting classes for kids. I always wanted to do everything in the theater. I’ve taken tickets for friend’s theater companies. I’ll sweep the floor. I’ll do stage management. I’ve done costumes. I’ve done lighting. I just really love the theater, so the more ways I work in things, the more brave I am about other things. I feel like directing makes me a better actor, and acting makes me a better playwright. All of it makes me a better artistic director.

I never think about it in terms of wearing a hat, which is weird because I’m also OCD and anal, so it’s like I only like to direct when I’m directing because otherwise it’s hard for me to focus. I think I primarily make my living as a producer/director/actor so paying acting/directing jobs take precedent. But it’s weird because I’m almost finished with two plays this year, and it's weird because it felt like it took me nine years to write Slipping. For the first time, I actually turned down some acting jobs so I could finish these plays because I really wanted to make myself do that. I knew that if I took those acting jobs, I wouldn’t do it, so now I’m frantically looking for an acting job because the funds are dried up.

Do you work with an agent?

I have an acting agent and a literary/directing agent. I’m really lucky because I love my agents. They’re really good people.

Bill Timms and Peter Strain at Peter Strain and Associates are my acting agents, and Morgan Jenness is my lit/directing agent, and she’s brilliant. She’s an artist instead of an agent, and that works really well for me. They’re great about me balancing them. She’s such a huge inspiration to me as an artist so I feel very lucky. I have a very positive artistic team to help support me, and allow me to do the different things. They’ll let me turn down jobs to direct something and vice versa, and that’s rare.

It seems like you’re a very positive person. That’s something I was struck by just in corresponding with you. Is that something you’ve cultivated?

It’s something that’s really important to me. We all chose to be in this life and I don’t think any of us, if we’re smart, got into it for money, or for any other reason than we just really wanted to do theater, and it’s a really hard life. You try to raise a family. You try to make a living, and I think it’s a fucking, heart-breaker life, but we all chose it, so I don’t feel I have a right to bitch about stuff because I made the decision to do this. I grew up in it, and I knew it was going to be very hard. This is what I was doing, whether I sucked at it, or was good at it, and I definitely have sucked, and I have been good at times. There’s a lot of unfairness in it.

The work has to happen either way, so I don’t understand why people have to be assholes to get the work done. Either way, the work has to happen, and either way the work can happen. I don’t think you have to be an asshole to accomplish that. It doesn’t make sense to me, so I try to be good to everybody, and there are times I’ve been an asshole, absolutely, and there’s times I talk shit, and I call myself on it. I think we all need to be responsible for ourselves, and responsible for ourselves as artists. I think being a person and an artist is one in the same. I just don’t think you need to treat people like shit. It’s hard enough. Why would we make it harder on each other as theater people?

Sometimes, I think people act that way because they think they need to in order to be taken seriously.

Yeah, I’ve literally had people say to me “look, we love you as a director, but we think you need to be meaner.” I’ve literally heard that, and I’m like, “no, I don’t”. I still get the work done. I’ve never missed a rehearsal. I’ve never missed a performance, and I’ve never opened a show late, so I don’t need to be an asshole to get something done. But I’ve been told that literally. You know like, “Oh, we love you Daniel. We’d love to send you out on this project, but we think you’re too nice,” or “you come across too casual,” you know? And I don’t think you need to be a dick, or act like a corporate businessmen to be a theater artist.

I wouldn’t go into a meeting with someone I didn’t know and say, “hey motherfucka!” (laughing) I’m not an idiot about it, but I try very hard to be myself, and I think I can do that and get my work done. I treat you with respect whether you’re the stage manager, or the intern, or the star, and the work is better. It’s a healthier environment, so people feel safer to go to nastier places I think. And I tend to like to work on darker, weirder shit - which is different than my personality a lot of the time, but I feel like if you live in that darkness all the time, it’s hard. If there’s a lot of laughter and joy in the room, it’s easier to get to the other shit.

So you started studying acting at 16…

I think I was just about to turn 17. I was a baseball player for a long time. I was training to play baseball in college.

Yeah. Crazy. When I get into something, I become obsessed with it so it’s like 24/7. I trained all day, and I played in five different leagues and played all year around, and a girlfriend of mine – she was in a play at A.C.T., and we’d make these crazy, horror movies together about vampires - and she said, you should take an acting class. So I went to A.C.T. because of her, and Andrew Dolan was my first acting teacher. And I just, from day one, totally quit baseball - right there on the spot. It was like I found my life, from that day forward.

It kind of blows my mind that you say when you’re working on something, you’re kind of OCD - yet you do so much. How does that work? It seems almost counter-intuitive.

I don’t know. I think a lot of theater and life is a struggle with self - in relation to society, in relation to people around you, and I have a lot of baggage –as does everybody, and it’s something I fight really hard with - a lot of problems with being worried about stuff, and fear, and stuff like that, so it’s good for me to fight against it. It can make me a little nutty sometimes, but I think I’m old enough to know that it’s me, and my shit, and not other people, so it gets you over yourself, and I think it’s really good for all of us to get over ourselves. That’s what theater’s all about. It’s about laying it bare, and here are my words, and these are my good qualities, and these are my bad qualities, and this is the grey area in between that I don’t really understand, and kind of sharing all that.

So what are you working on now?

I’ve been auditioning a lot, and I’m finishing a new play. I was doing this thing called 24Seven Lab which was founded by Sharon Freedman, Edith Freni and Sarah Hayon, and is a really awesome group of people, and my goal was to finish a full draft of the play. I’m about halfway there which is pretty good, but I was kind of bummed I didn’t finish it.

Tell me about the 24Seven Lab.

It’s this awesome thing where they commission or ask a small group of writers to get together every week, and you kind of make a goal for like two months, and it was hard because I was directing a couple things while doing it, and I’m one of three literary managers at Rattlestick Playwrights Theater, with two of my best friends who also run Rising Phoenix Rep. with me, and we were doing all this stuff at Rattlestick, so I kind of bit off a tad more than I could chew. I can do that at times. So, I’m trying to finish that right now, and I have the next three weeks open before things get crazy again.

So you were working on a play for two months that is now about half-way done. It takes some people a year to do a full-length play.

Unless you’re like Adam Rapp and you write one in like a night, you know? (laughing) I’m also looking at some things I might direct, and we have stuff coming up at Rising Phoenix in August and fall. We’ll do our next off-Broadway show, and I’m going to teach for the first time ever, which I’m really excited about.

Yeah, I’m going to teach a site-specific directing class - kind of what we do with our lab space at Rising Phoenix. We got sick of worrying about money so Denis Butkus - who helped found Rising Phoenix Rep. with me, and is also one of the literary managers at Rattlestick, found this great space called Jimmy No. 43. He found it on Playbill, and Jimmy’s kind of made us one of the resident theater companies there, so he’s been really great to us. So, we commissioned playwrights for that space, and it allowed us not to obsess about money all the time. Our kind of independent theater stuff started becoming about how to make the highest quality theater possible for as little money as possible, instead of it always being about money. So, this class is going to be a lot about working with what you get. Let’s say you’re given the Scottish Play. Your dream is to do the Scottish play, and you have no money, so can you do it in the bathroom, or at a rest stop at Grand Central? It’ll be about six to eight directors.

That’s going to be this summer?

Yeah. Their school is amazing. It’s all the people I love. I love Tessa LaNeve so much. I think she’s a fucking rock star. It’ll be on Mondays, so I can still do a show as an actor, and if I’m out of town, I can come back.