The Amoralists Have What It Takes - part 2 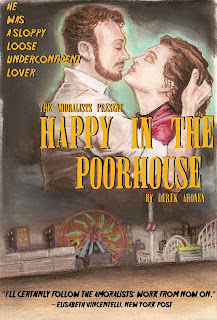 "...So they went to Las Vegas and were like, 'We’re going to make a bunch of money to set up a theater company!' It didn’t quite work out that way, but they started it anyway."

Producing partner of The Amoralists, Meghan Ritchie, talks about how the company started, how they keep going, and what their hopes are for the future.

(This is the second part of a two-part interview. The first is with founding playwright/director, Derek Ahonen.)

Tell me about the origins of The Amoralists.

When they first started the company, they went out to L.A. to see if they could make a go of it out there, better than they could here, but when they got there, they were turned off by it quite a bit, so they went to Las Vegas and were like “We’re going to make a bunch of money to set up a theater company!” It didn’t quite work out that way, but they started it anyway. Derek Ahonen had already been writing some plays that had been produced by other companies, so they took one of his plays, While Chasing The Fantastic, and did it at the Kraine Theatre. They just kind of did it trial by error. They got a response where they could get their friends to come out and see it. They could get people involved. They got to work with each other and then they just kept going from there.

Every year it’s gotten a little bit bigger, and now we’re to the point where we’re doing all the things that companies do in the beginning, like business plans and all those things. We’re playing catch-up and doing that now, four years in. It’s helpful to have made mistakes over time and realize that September’s not the greatest time to do a play because the dates tend to conflict with a lot of Broadway openings and holidays, or that press reps can make all the difference - like having a press rep that can get you good reviewers, and who really work hard for you so you can be seen by more people. So we’ve learned over the years all those little things that go into building a big company.

Did you start with a press rep right away or is that something that came in later?

I think they did their own press for the first play and I’m not sure if they did for the first two years or just the first year but then we found David Gibbs of Darr Publicity for Pied Pipers’ second mounting and he was fantastic. So far we’ve been working with him and have really enjoyed our relationship. He really gets the company. He’s passionate about what we do, and he does a great job, and he’s fun to work with. We also can attribute it to the fact that P.S. 122 and Theater 80 are bigger venues than the Gene Frankel. It’s easier to get them to come to these, so moving up with David and into these bigger spaces combined to kind of create a really perfect storm for starting to get noticed a bit more.

Were you all in the same class at The American Academy of Dramatic Arts?

Yeah, we started at The American Academy in 1999 and met each other there. Matt Fraley, myself – who joined the company in 2009, Matt Pilieci, James Kautz and Derek Ahonen all went to school together. A number of the actors that we work with are from The American Academy as well, mostly because, having gone to that school, we have more access to go see their showcases and we know that they work in the same sort of language that we do and in the same sort of style, so it’s definitely been a good resource for our company.

So you all graduated around 2001 and were trying to make it as actors before this company was started?

Yeah, just kind of make it and do our own things, which is great but I think part of the reason the company formed was because they felt like if they were really going to be doing work that they loved, that they believed in, and that you created yourself, you have to just jump in and do it. Nobody’s going to come and try to find you to do that kind of work, and since Derek was a playwright and we loved his work, it was a natural fit.

One of the things that I thought was interesting is that you guys have decided to stay Non-Equity. Can you talk a little about that?

I think our goal overall is to be able to be big enough to work within Equity rules. Currently, it doesn’t allow us the freedom to work the way that we do. Our shows can budget in at roughly $30,000 to $60,000 per show if we pay everybody the amount that we’d love to pay them. I mean, it’s an actor-driven company. We want to pay our actors. We want to pay the people that create it. It costs a lot of money. There are also rules with Equity. When we first started, we would have only been able to do 16 performances which means you’re not eligible for any of the awards thoughout the season. You’re not eligible for a certain amount of press. With $18 dollar tickets, which are what you have to have, it’s really hard to recoup any money, and we don’t necessarily make any money yet. We try to use any profits we make towards the next show, so we try to make as much as we can, so we can continue on with the work and Equity doesn’t necessarily help us yet. We’re all Non-Equity so you know, for now, it makes sense for us to try to stay that way as long as we can to try to build the company so that eventually we can join Equity.

In this venue, being that it’s 160 seats, we could no longer do showcase code anyway, so it would have to be like a major off-Broadway Equity contract and it gets expensive. Non-Equity means we can work with up-and-coming actors who are really hungry and want to do stuff and have the same attitude as we do, so it’s helpful for us at the moment.

So does that mean as actors within the company, you don’t necessarily get paid?

Yeah, but we try to spread the love whenever we can, if we profit enough that we can pay for the down-payment for our next show and we can take care of the expenses and the money that people have put into it. We have a bank account but we all kind of pitch in and help buy props and things, so we reimburse, and we make sure that nobody actually has to pay for anything themselves anymore. Then, if we make any money over that, we spread the love and give a bonus to the actors and just take care of people as much as we can.

Initially, Matt, Derek and James put in quite a bit of money just to start the company, so it was their investment and they bankrolled that by working in bars and doing day jobs and getting money wherever they could. It was pretty much that way up until last year where we became fiscally-sponsored which helped us to be able to ask for tax-deductible donations which was a major shift in our ability to get people to give us money who hadn’t considered it before.

We also have fund-raisers as often as we can without depleting our group of people. We had one major season-opening fundraiser, and then we’ll have little ones throughout the year that people will throw, like if someone wants to throw a Halloween party, they’ll do it with a donation at the door. Little things like that we’ll get along the way, but two or three fundraisers a year at this point. Usually, for every show, we’ll have to do a big fund-raiser. We have another show opening in June so we need to raise that money and we’ll probably have to have another to-do and then another one in September when we’ll be gearing up for the show in November.

Have you done two shows every year since you started?

Usually it has been two. Last year, we reprised Pied Piper of the Lower East Side at P.S. 122. We extended it so many times and were able to continue to let it live on so that was the only show we did in 2009. And this year we have three shows scheduled.

Happy In The Poorhouse is the first?

Yes, then we’re relaunching Amerissiah and then Adam Rapp gave us his first play and is directing that. The hope is that we’ll be able to continue with a couple plays by Derek Ahonen a year and then have a guest writer. That’s kind of the thinking on the following season at the moment. Of course, that can change depending on how the season moves, how big it gets, if we have to scale back, but that is the hope.

It’s kind of amazing that given the economic climate that you guys have done so well in such a short amount of time.

We’re amazed that we’re able to get any money, but we’ve been really lucky with generous friends and neighbors and family members and people that were really interested in Pied Pipers and wanted to continue to see the work. We’re really grateful for that so we’ll just continue on as long as we can get those same people to support it, and try to meet new people and get as much new audience as we can. Audience building has turned out to be a really interesting thing to learn about now, now that we have a bigger house, we’re kind of learning where our ceiling is. We were at P.S. 122 and we started selling out at 70 seats so then we’re like, we need a place that’s bigger. Originally, we started at Gene Frankel which is like 50 seats, then P.S. 122 with 70 seats, and then here at Theater 80 with 160 seats, and we’re still at 75%. We’ve had a few nights where we’ve had 100, 120, 140 people which has been great. We just want to continue that for the next run, where we start out at 100 people, and then at the end of Amerissiah, have close to 150 people in every audience, so that in the fall, that’s our ceiling. It’s just trying to build so we have that amount of people going in and it’s not so terrifying going in and wondering if we’re going to make rent off the back end.

Is there any advice you’d like to give anyone that wants to start their own company?

Yes, definitely. More important than anything else is that you have to be 100% committed to spending all of your time passionately working on your work, and find good work to do. Don’t get together if you just want an agent, and all of you want different things. You can probably get together and do a few shows that way and get some interest in what you’re doing, but if you want to create a company that continues on into the future years and decades, have a general goal that you are all looking towards and have it be similar, an idea about what you guys all want and be really passionate about it and just work your ass off.

Meghan Ritchie is a producing partner and actress with The Amoralists. Happy In The Poorhouse is extended thru April 26th at Theater 80 (80 St. Marks Place, NYC). Don't miss it.
Posted by Unknown